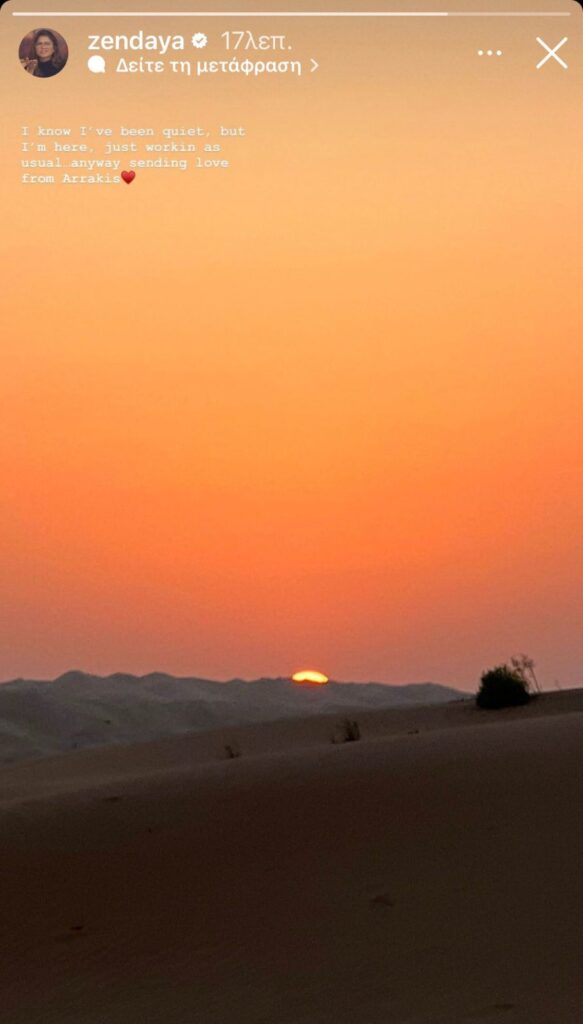 Zendaya has shared a new photo from the set of Dune: Part Two.

With filming on Dune: Part Two currently underway in Abu Dhabi, Zendaya took to her official Instagram page to offer fans a sneak peek from the set of the highly-anticipated movie. The location serves as the backdrop for the fictional desert world of Arrakis, which is the homeworld of Zendaya’s character Chani Kynes. Check out the photo below.

Denis Villeneuve directed the first Dune movie and is back in the director’s chair for the upcoming sequel. He co-wrote its script alongside Eric Roth and Jon Spaihts. The three are also developing a prequel series exploring the origins of the Bene Gesserit for HBO Max.

A joint venture between Warner Bros. and Legendary, Dune is based on the 1965 novel of the same name by Frank Herbert. The first movie opened in theaters in October 2018 and earned $401.8 million at the worldwide box office, along with six Oscars during the 94th Academy Awards.

The official Dune: Part Two synopsis reads as follows: “This follow-up film will explore the mythic journey of Paul Atreides as he unites with Chani and the Fremen while on a warpath of revenge against the conspirators who destroyed his family. Facing a choice between the love of his life and the fate of the known universe, he endeavors to prevent a terrible future only he can foresee.”

The first Dune movie is now available on home media formats, with Part Two hitting theaters on November 3, 2023. Stay tuned for the latest news from the world of Dune and make sure to subscribe to our YouTube channel for more content!