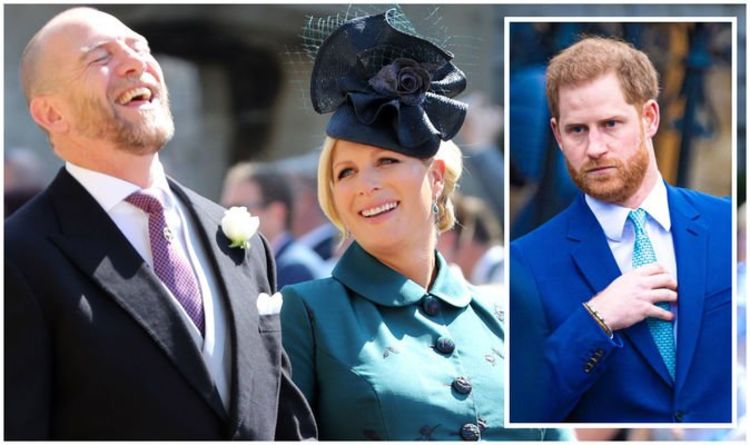 Zara Tindall, 40, and Mike Tindall, 43, are two members of the Royal Family who are not active working members of the Firm. However, the duo are very successful in the sports world, with Zara being a former Olympic equestrian and Mike being a Rugby World Cup player. The two appeared in an interview over the weekend with Australian sports commentator Hamish McLachlan to discuss the Magic Millions Racing Carnival and horse auction event.

The royal couple are patrons of the event and usually attend every year, but couldn’t this year due to the coronavirus pandemic.

In a clip posted to the official Magic Millions Instagram account, Zara and Mike appeared on Zoom with Hamish to discuss their future plans to return to the Gold Coast for the annual event.

The couple were forced to miss the occasion for the last two years due to coronavirus travel restrictions.

Zara told Hamish: “We are so missing the warmth,” as she appeared alongside Mike against a tropical green screen background.

The 40-year-old royal donned a smart striped blouse for the occasion, styling her blonde hair into a sleek low bun.

Mike opted for a vibrant floral shirt layered beneath a grey blazer.

Zara continued: “Last year was definitely a no, no, we’re not coming down, while this year we were almost there.

“We’re really itching to get out there.”

Joking about their tropical Zoom background, Mike said: “We’re trying to feel like we’re on the Gold Coast!

“It’s about minus one outside and miserable and pitch-black,” the royal added.

She said: “These two are clearly so totally in tune as a couple and that would make them great and popular company, which shows in this short chat.

“When Harry quit the UK we lost some of the uninhibited and spontaneous humour and banter from the Royal Family.

“But these two seem to be the bearers of that torch in his absence.

“They sit so close together that Zara is virtually tucked under Mike’s armpit.

“When they speak their individual roles are obvious, although so are the binding signals of closeness and affection as they eye-check each other with an expression of fondness.

“Zara clearly adores Mike’s sense of humour as she turns to grin during the banter about his outfit.

“They both join in though, showing a complementary sense of shared fun alongside the affection.

“Like Harry though, we also get to see Zara speaking in what would normally be a more royal role.

“In between the eye-rolling laughter, she comes across as a passionate and seriously invested advocate of the Magic Millions Carnival when she expresses what looks like genuine regret at not being able to attend in person.

“The couple also look very low on vanity and high on the ability to not take themselves too seriously in their choice of virtual background and outfits.

“It looks like a shared joke they prepared and judging from the presenter’s response it was on they got spot on.”

Roger Rabbit for a New Generation

Disney World Best and Worst Restaurants From Someone With…