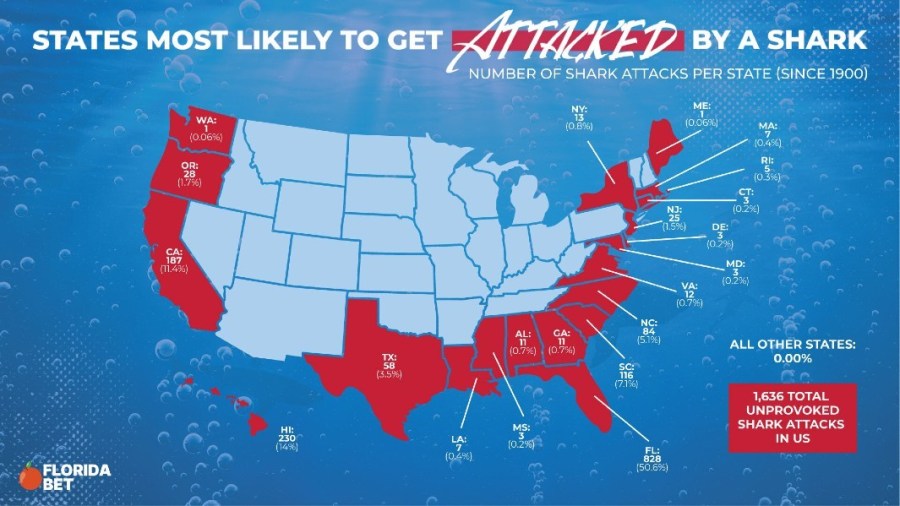 Despite Oscar-winning films and an entire week of television programming dedicated to them, perhaps no animal is more misunderstood than the shark.

The creatures have a reputation as a fearsome predator, and while that’s true for fish, marine mammals and some seabirds, humans have very little to fear.

In short: visitors to the state, as well as locals, shouldn’t worry about shark attacks.

While shark sightings in California are regular, attacks are extremely rare. And despite being home to hundreds of miles of coastline, with sharks claiming the area beyond the tide as their turf, the risk of being attacked — or even less, killed — by a shark is miniscule.

Since 1900, there have been about 1,600 shark attacks in the United States that are considered “unprovoked.” That’s about 13 per year, according to SharkAttackData.com.

And more than half of those attacks have all happened in one state: Florida.

According to data compiled by FloridaBet.com, 828 (50.6%) of those unprovoked attack happened in the Sunshine State. And the majority of those attacks have all occurred in Volusia County, which is home to Daytona Beach.

A number of reasons are possible for the disparity in shark attacks in Florida compared to the rest of the Union. For one, it has the nation’s second largest coastline behind Alaska. More coast means more beaches means more ocean means more chance of encountering a shark — makes sense, right?

Another reason is the type of sharks one could encounter in Florida. While California is home to white sharks, the southern coast of the U.S. is home to a smaller breed of shark known as the blacktip. Blacktip sharks have semi-frequent encounters with people and, according to National Geographic, have even been known to follow fishing boats to feed on discarded fish caught by mistake.

Finally, the state’s warm water is another likely contributing factor to the shark encounters. Sharks tend to follow their food and their prey are often closer to the shore thanks to ocean currents, FloridaBet says in its analysis. And fish aren’t the only things that enjoy warm water, humans flock to Florida for its warm ocean waters too. Speaking of which, have you ever wondered why the ocean in California is so cold?

Back in California, Fish and Wildlife officials say the only way to avoid any risk of having a shark encounter is to avoid the ocean altogether. But while humans have greatly increased their beach and ocean activity, including surfing, swimming and scuba diving, shark incidents have not increased at the same rate.

So, if you can stomach that risk, the ocean is big enough for both you and sharks.

If you’re interested in helping sharks across the globe, National Geographic has some tips.