Yes, wash your shoes at the airport – but we can do more to stop foot-and-mouth disease ravaging Australia 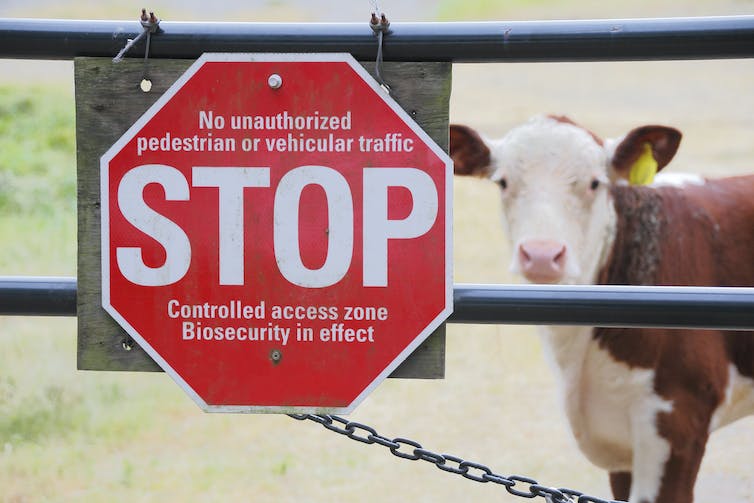 Passengers arriving in Australia from Indonesia will be directed to wash their shoes after the federal government ramped up efforts to prevent foot-and-mouth disease entering the country.

But effective biosecurity involves more than just what happens at the airport. Australia operates one of the most comprehensive biosecurity systems in the world, however, there’s more we can do.

Biosecurity is also not just an agricultural issue. It’s essential to protecting human health, societies and the environment.

Unfortunately, good biosecurity doesn’t come cheap. Adequate funding is vital. That includes ensuring those who cause the problems contribute to fixing them – something that doesn’t happen now.

Foot-and-mouth disease (unrelated to hand, foot and mouth disease in humans) is a highly contagious viral infection that affects livestock such as cattle, sheep and pigs. It causes painful blisters on the feet and in the mouth, preventing the animal from eating, drinking or even standing up.

The disease was detected in mainland Indonesia in May – 40 years since the last outbreak there – before spreading to Bali earlier this month.

Foot-and-mouth disease is endemic in many countries. But its arrival in Indonesia makes it more likely the disease could reach Australia, given the significant travel and trade between the two nations.

Australia exports more than two-thirds of its livestock products. Official estimates put the economic cost of a major outbreak in Australia at A$80 billion.

In the United Kingdom, a 2001 outbreak of the disease cost the economy around $13 billion and more than 6 million animals were destroyed.

There have been calls for Australia to close the border to Indonesia following the current foot-and-mouth outbreak. But farmers say the radical move would not remove the risk entirely and would do more harm than good.

Read more:
What is foot and mouth disease? Why farmers fear ‘apocalyptic bonfires of burning carcasses’


Where does shoe-washing come in?

We can think of biosecurity as a bit like Swiss cheese. Every slice of Swiss cheese has holes. But when the slices are lined up, the block is solid and impenetrable.

Biosecurity, done well, involves figuring out how to line the slices up.

Catching diseases at the border is one slice of the cheese. That’s why the federal government is now directing passengers who’ve flown in from Indonesia to clean their shoes and walk over disinfectant mats at airports.

Travellers will also be asked to declare any contact with farms and livestock. Those with visibly contaminated shoes will be taken to a biosecurity area.

Research has shown these measures are not always effective. But having said that, it’s good practice to clean your shoes any time you’ve been off the beaten track.

The soles of shoes contain any number of contaminants. In 2008, for example, a survey at Christchurch Airport found bacteria and fungi on 99% and 78% of footwear, respectively.

A good scrub, then a wipe with disinfectant, is usually enough to reduce the contamination to acceptable levels. Even a rinse with water is better than nothing.

Read more:
Wearing shoes in the house is just plain gross. The verdict from scientists who study indoor contaminants


What else can we do?

Good biosecurity extends far beyond shoe-cleaning. It involves other activities at the border and within Australia, as well as efforts overseas.

The greatest risk of foot-and-mouth disease entering Australia comes from meat products from an affected country. It’s easy to declare these when you arrive in Australia – or better still, don’t bring them in at all.

This is why extra detector dogs have been stationed at Australia’s airports – to detect unauthorised meat brought into Australia.

Farmers must practice good biosecurity on their properties, such as maintaining hygiene, keeping records and rigorous monitoring of livestock health.

Preventing the infection at source countries is a highly cost-effective way to protect Australia from imported diseases.

However, because these vaccination programs take months to complete, the risk of foot-and-mouth disease in Indonesia will remain high for some time.

The threat of foot-and-mouth disease is not new. Australia has detailed, well-rehearsed response plans and arrangements in place. But more is needed.

In 2017, an independent review found budgetary and other constraints were making it hard for Australia to meet its biosecurity commitments.
At the same time, biosecurity risks were increasing. The review said substantial new investment was needed to strengthen the national system.

Currently, the costs of managing and controlling new diseases is borne by those affected by their entry and spread – such as farmers and taxpayers. Those who create the risks – such as importers, vessel owners and travellers – are generally not called on to contribute to response costs.

But this not need be the case. Recent research has suggested a solution whereby importers would have to purchase biosecurity risk insurance and premiums would be used fund clean up costs.

Shoring up Australia’s biosecurity requires us all to accept shared responsibility. That means everyone adhering to the rules – and yes, washing your shoes at the airport.

Read more:
VIDEO: Should Australia close its border to Bali in the fight against foot and mouth disease?

Rösti with All the Fixings Recipe