Yes, The James Webb Space Telescope Really Should Launch In 2021 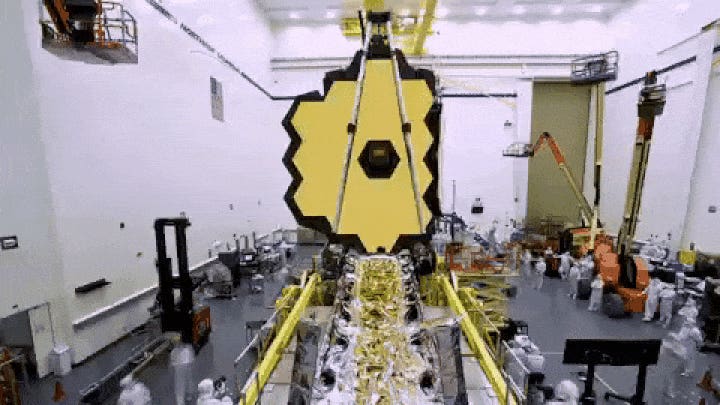 NASA’s James Webb Space Telescope, originally proposed in the 1990s, is finally slated to launch later this year: at the end of October, 2021. In many ways, it’s the successor telescope to Hubble, capable of showing us the Universe beyond our current limits. Not only will James Webb be the largest telescope ever sent to space, capable of gathering more light and achieving superior resolution compared with any prior space-based observatory, but it will be specialized for near-infrared and mid-infrared wavelengths, allowing it to peer through the gas and dust that obscures the views of our other cutting-edge telescopes.

But a series of unfortunate events — from missed engineering targets to funding woes to problems with project management to the current pandemic — have pushed the target launch date out year after year. An initial launch date of 2007 was pushed to 2011, then to 2014, then to 2018 and now, at the latest, to 2021. Many have publicly expressed their skepticism that this observatory, whose lifetime cost now nears $9 billion, would ever launch. For the first time, however, the target launch year now matches the current year, and all signs point to an on-time launch on or around October 31, 2021. Here’s where we are today.

It’s important to recognize that the James Webb Space Telescope, the first NASA astrophysics flagship mission since the original four great observatories of Hubble, Compton, Chandra and Spitzer, represents an unprecedented series of “firsts.” It’s the first space telescope anywhere near its size, with a primary mirror diameter of ~6.5 meters (21.3 feet), nearly twice the diameter and with quadruple the light-gathering power of the previous record-holder: the European Space Agency’s Herschel Telescope.

It’s the only space telescope equipped with its suite of modern instruments. It’s the only one to have such a sophisticated pointing system. It’s the first telescope of this scale that will be located not in near-Earth orbit, but some 1,500,000 kilometers away: at the L2 Langrange point beyond the farthest reaches of the Moon. It’s the first multi-segmented mirror that will have to unfold and calibrate itself to 20 nanometer tolerance in space. And it’s the first telescope ever to employ a multi-layer sunshield, designed to passively cool the telescope and its instruments to below liquid nitrogen temperatures.

Whenever you do something novel for the very first time, it becomes very difficult to predict what sort of obstacles you’re going to encounter. In many ways, James Webb feels like it’s been an unlucky project in a number of ways, as some of its woes were completely unforeseeable, but others have been expensive lessons learned by NASA’s astrophysics division. The initial cost estimate for this version of Webb (in its current configuration) was only $5.1 billion, and there was initial mismanagement early on as milestones were missed and insufficient action was taken.

In 2010, it became clear that the launch date (which was 2014 at the time) was not feasible, and both the internal critical design review and an external Independent Comprehensive Review Panel concluded that the primary culprit was a lack of sufficient near-term reserves. When new, unexpected issues were discovered, the project simply didn’t have the resources on hand to properly address them. At the time, the project components were 85% complete, while approximately $3.5 billion (of the initial $5.1 billion estimate) had already been spent.

So how did we wind up with nearly a $9 billion mission? It’s important to look at the findings of that Independent Comprehensive Review Panel from 2010. They concluded that James Webb could be launched in late 2015, for a total cost of $6.5 billion, but only if an extra $250 million were provided in both 2011 and 2012. The panel was unambiguous in stating that this was the earliest and least expensive launch plan for James Webb, and that any delay in funding would result in a more expensive mission.

Of course, those additional funds were not provided, and that caused a large number of layoffs, as the personnel needed to complete the job — with the knowledge and experience they had gained from working on it thus far — were not kept on. Components were delayed as a result. As the people who were working on it found other jobs, it became clear that completing James Webb would become far more expensive and would experience initial delays. There would be an extra ~$1.5 billion required to complete the telescope due to the delay and many extra years, and approximately $800 million ($0.8 billion) was rolled into the cost to support the 5 years of operation that James Webb’s primary mission required.

In the time since then, the technologies that needed to be developed were developed, but there were setbacks along the way. During vibration testing, which simulates launch conditions for the spacecraft, screws came loose and fell out, along with washers, requiring a series of unanticipated interventions. During a test where they unfurled the 5-layer sunshield, it caught on a portion of the spacecraft element, tearing slightly before the test was aborted. Leaky valves were found along the way, and many other obstacles were encountered. It seemed, to an external observer, that everything that could go wrong did go wrong.

But all throughout this time, legitimate progress was still being made. The mirrors were completed and both the primary and secondary elements completed testing without a hitch. The scientific instruments were completed and integrated, and electronics and computer systems tests have been successful so far. The aforementioned problems were identified and addressed. In science, as in life, it isn’t important to get everything right the first time; it’s important to get it right in the end.

And now, at the start of 2021, we’re almost at the finish line. This past year, despite the worldwide pandemic, saw James Webb achieve a number of important milestones.

With 2021 now upon us, the moment of truth — launch and deployment in space — quickly approaches. There are only a few steps remaining, and they’re all slated to occur on or ahead of schedule this year. The next test will be a final comprehensive systems check: the fifth such test to be performed. If all goes well, it should be complete by the end of next month or earlier. In March, the first observing proposals will have their reviews completed, so the initial (what we call “cycle 1”) scientific program for James Webb can be established at that time. The sunshield will be folded and stowed for the last time, and then a second launch readiness exercise will be conducted; this should be complete by the end of March.

By the end of May, the very last Deployable Tower Assembly test will be complete, ensuring that Webb’s mirrors and instruments can be lifted to a safe distance above the lower sunshield and spacecraft element. That “gap” will be required to enable the main elements of the telescope to be cooled to the appropriate temperatures, which is required to ensure that James Webb can function at the infrared wavelengths it needs to conduct its scientific mission.

And then, in July, the observatory will be stowed for the final time. It will undergo a final review and launch-readiness exercise at the Northrop-Grumman park in California, and then in August will be transported to the launch site in French Guyana. Once there, final (routine) tests will be performed, and then the spacecraft will be packaged into the Ariane 5 rocket which will launch it into space. So long as the weather, temperature, and other conditions cooperate, we have a nominal launch date for James Webb: October 31, 2021.

If the weather doesn’t cooperate, that isn’t a dealbreaker; there’s a launch window for more than a week on either side of that date that would still be just fine for a launch. If we miss this window, another one will recur after only a few weeks.

Although I was only able to obtain launch window data for the 18 month period from July 2018 to December of 2019, the physics of launching a fully loaded Ariane 5 rocket remains very similar from year to year. As you can see (below), there are many launch windows that will work, and there are no gaps of more than a month at any point in time.

Assuming the telescope launches successfully and deploys properly, we can expect many years of fantastic science from James Webb. In particular, four important cosmic records are almost certain to be broken in the coming years.

Although it’s always risky to assume that nothing unforeseen will go wrong from here on out, the truth is that the most difficult parts of this mission that humans can control have already been successfully taken care of. Less than 12 months from launch, even during a pandemic, we’re absolutely on or ahead of schedule in every way to meet the October 31 launch date. Barring an accidental catastrophe or sabotage of some sort, this telescope is ready to go.

We’re certain that it’s equipped to bring about a revolution in our understanding of the cosmos, with the most exciting possibility being that it finds something wholly unexpected and surprising; that’s the best part about pushing the frontiers of discovery. Once it’s in space, James Webb’s lifetime should be limited only by the amount of hydrazine rocket fuel on board, required to keep the spacecraft in its quasi-stable orbit and to enable it to point at its targets. With enough fuel for a 5-year mission, some estimate that excellent fuel management could extend it to a 10-year mission, where the option to refuel hasn’t been ruled out yet.

With extreme confidence, we can now state that 2021 will be the year that the James Webb Space Telescope finally launches. What comes after that will depend on what’s out there in the Universe.