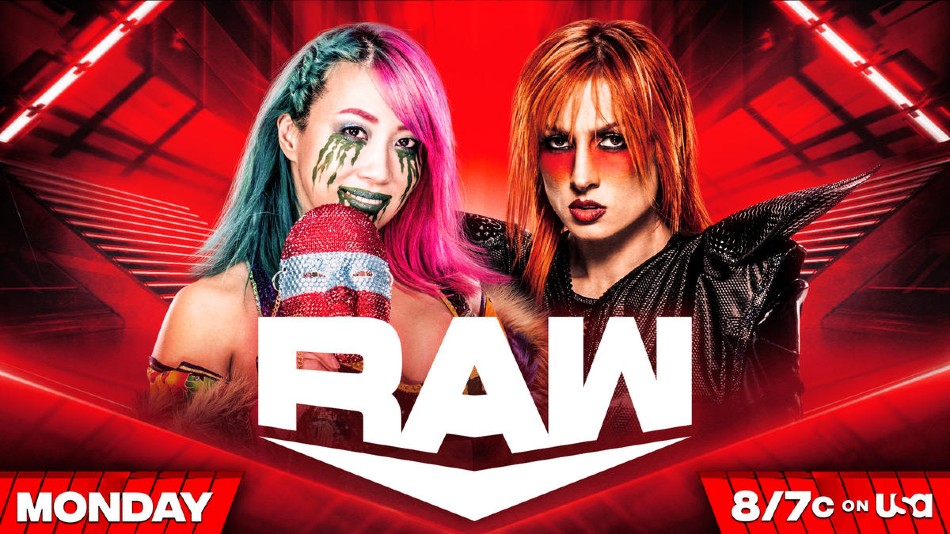 The battle between two former Raw Women’s Champions is a not-to-be-missed matchup and so is the presence of two lookalike brothers as WWE has promoted Elias’ grand return concert for the June 20 episode of Monday Night Raw emanating from the Pinnacle Bank Arena in Lincoln, Nebraska.

Dana Brooke got the biggest win of her WWE career as she successfully defeated Becky Lynch for the 24/7 Championship on Raw’s June 6 episode. Asuka played a big role to be the decisive factor as she distracted Becky during the finishing sequence of the match.

Becky got her revenge as she attacked Dana Brooke before the rematch and made it clear that she wasn’t concerned for Brooke and her 24/7 Title. Instead, she wants to win the Money In The Bank briefcase so she can finally regain the WWE Raw Women’s Championship.

.@WWEAsuka has been a thorn in @BeckyLynchWWE‘s side since she made her return to Raw.

TOMORROW NIGHT they finally battle it out one-on-one! Winner will earn a coveted spot in the #MITB Ladder Match and move one step closer to the #WWERaw Women’s Title! pic.twitter.com/3TxJr7ybzu

Asuka again ran out to thwart Becky off the ring and thereby continue the feud that was reignited via her own return to WWE on the April 25 episode of Raw. Now they will finally meet in the ring to settle the score and with a big opportunity hanging in the balance.

WWE has since announced that The Empress of Tomorrow and Big Time Becks will meet in a one-on-one capacity on Raw with the winner earning her way into the Women’s Money in the Bank Ladder match.

As for the Men’s Money in the Bank ladder match, Seth Rollins (defeated AJ Styles on June 13 Raw to qualify), Drew McIntyre and Sheamus (these two qualified after their match ended in a double DQ) are the confirmed participants. No new qualifier for this week’s Raw is yet to be announced.

Doudrop, Liv Morgan, Rhea Ripley, and Alexa Bliss competed in a fatal-4-way match on June 13 with the winner earning the number-one contender’s spot for the Raw Women’s Championship. Ripley, the Judgment Day member won the bout to receive a title match against Belair at MITB.

That was the same night that Judgment Day received a new leader in Finn Balor after kicking out WWE Hall of Famer Edge from the group. Since that instance, the re-formed faction is expected to make their first live presence on Raw, tonight to give insight on their next step.

WWE Universe will be allowed to “Walk with Elias” as Ezekiel’s older brother, Elias returns to perform one more concert in front of the live audience present in Lincoln.

Kevin Owens is leading those WWE Superstars who are still under the impression that Ezekiel, himself is Elias. In fact, the second-ever Universal Champion is so obsessed with proving the conspiracy theory true that he didn’t mind getting a count-out loss against Ezekiel in a rematch from Hell in a Cell.

Are YOU ready to once again “Walk with Elias”?

TOMORROW: @IAmNotEliasWWE‘s older brother is set to put on the concert of a lifetime on #WWERaw! Will a skeptical @FightOwensFight finally be proven wrong? pic.twitter.com/ueWZCKWNuw

Owens started yelling at WWE Raw commentator Byron Saxton until he got counted out to ten after which Ezekiel took the mic and dropped the bombshell that Elias is set to return to WWE, this week. With that, we can expect to have the first-ever segment featuring both the “brothers” under the same roof.

So, will the two brothers be able to put up the concert of a lifetime and thereby set up a dream tag team? Or, will a fuming Kevin Owens have his own master plan to interrupt the reunion? Tune into this special episode of Raw on the USA Network to have the answers.