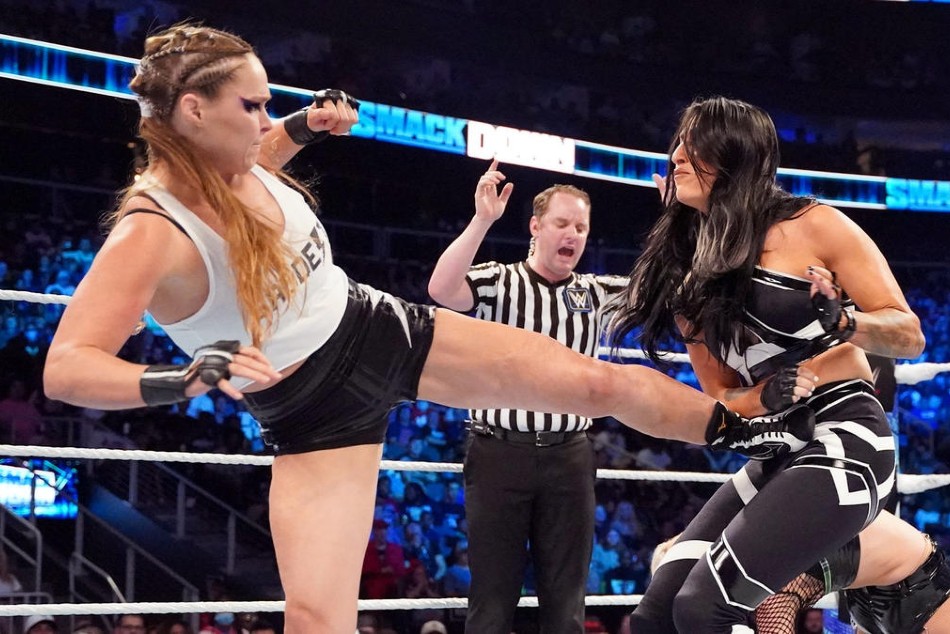 Bengaluru, July 30: The final edition of SmackDown before the 2022 SummerSlam aired last night with the first-ever Shillelagh Match as the main event to determine the Number-One Contender for the Undisputed WWE Universal Championship at Clash at the Castle.

The New Day continued their rivalry with The Viking Raiders by competing in a tag team match. Also, Brock Lesnar made a surprise appearance to take out Mr. Money in the Bank Theory.

Check out the recap and results from the July 29 episode of Friday Night SmackDown that took place at the State Farm Arena in Atlanta, Georgia:

– Drew McIntyre defeated Sheamus (With Ridge Holland and Butch) in an Irish Donnybrook Street Fight to earn an Undisputed WWE Universal Championship match at Clash At The Castle in September.

Sheamus took an early advantage by attacking McIntyre during his entrance. But McIntyre ultimately powerbombed Sheamus through a table and Claymore-d his way for the pin to win.

After the match, McIntyre was speaking with Kayla Braxton when Money In The Bank contract holder Theory attacked him from behind. Theory left after hitting McIntyre with the MITB briefcase a few times.

– Happy Corbin bought a ticket so that he could sit right behind Pat McAfee on the commentary table. He also had a ‘Loser’ sign with Pat’s old mugshot stuck on it.

Corbin eventually threw popcorn at Pat to annoy him before and kicked him in the ba**s before the officials came out to stop him.

– Shotzi defeated Aliyah in a singles contest. After sending Aliyah to the ring post, Shotzi hit the Never Wake Up finisher on her for the win.

– Ronda Rousey came out after the match and took out Shotzi before calling out Liv Morgan. Ronda indicated a heel turn by telling a fan to shut up.

– SmackDown Women’s Champion Liv Morgan and Ronda Rousey then defeated Natalya and Sonya Deville in a tag team match. Rousey delivered a knee to Deville followed by the Piper’s Pit.

She went for the arm bar, but Natalya made the save. Morgan took Natalya out with an Ob-Livion, allowing Rousey to apply the Ankle Lock on Deville for the pin to win.

Tonight, they get the win as a team.

– Undisputed WWE Tag Team Champions The Usos and The Street Profits came face to face before their title match at SummerSlam.

A brawl broke out between both teams and the Special Guest Referee Jeff Jarrett was taken out via a Superkick from Jey Uso. As The Usos checked on Jarrett, Profits sent them out of the ring to stand tall.

– The Maximum Male Models (Max and Maxxine Dupri along with Ma.çé and Mån.sôör) showed off their SummerSlam beachwear collection.

– The Viking Raiders (Erik and Ivar) defeated The New Day (Kofi Kingston and Xavier Woods) in a tag team match. Ivar delivered a sit-out powerbomb on Kingston and tagged in Erik to hit a double power bomb to get the pin to win.

After the match, Erik and Ivar wrapped a Steel Chair around Xavier Woods’ ankle and hit the Chair with their Shields to badly injure The New Day member.

– Paul Heyman came out in the main event segment of Smackdown and assured the fans that Roman Reigns is going to be the Last Man Standing at SummerSlam to smash Brock Lesnar, and thereby continue his reign as the Undisputed WWE Universal Champion.

Brock Lesnar came out and confronted Heyman when Theory attacked him from behind with his MITB briefcase. Lesnar easily fired back with a series of German Suplexes to put Theory down.

Then Drew McIntyre appeared out of nowhere and leveled Theory with a Claymore Kick. McIntyre and Lesnar shared a staredown to end the show.

How Tall Is the ‘Kissing Booth’ Star?