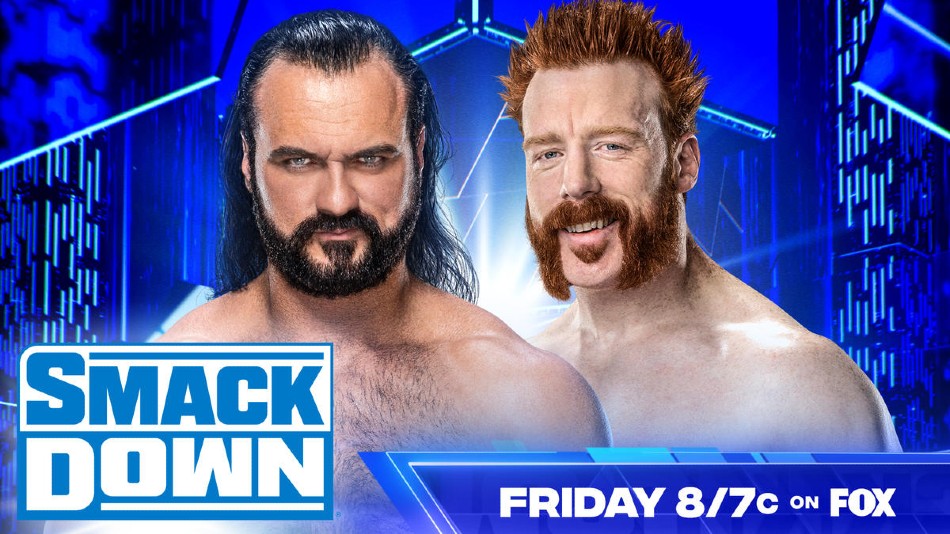 The main event of the night will see two UK brawlers fighting it out for the Number-One Contender’s position for the Undisputed WWE Universal Championship at the latter-mentioned event.

Lacey Evans is being promoted to compete in her due match against Aliyah while The New Day and The Viking Raiders will continue their rivalry by taking on each other inside the squared circle.

Also, the newly appointed director of the Maximum Male Models agency will have a special summer treat for the fans when the July 29 Friday Night SmackDown emanates from the State Farm Arena in Atlanta, Georgia.

Over the past few weeks, two one-on-one contests were postponed between Drew McIntyre and Sheamus due to the shenanigans thrown by the latter. But they finally agreed to put aside the differences and dance in the ring with a coveted prize waiting as the reward.

The Scottish and The Celtic Warrior will now go to war on SmackDown in a good old-fashioned Irish Donnybrook Match which is also being touted as the first-ever Shillelagh Match in WWE history where Sheamus’ favorite Shillelaghs will surround the ring.

The four-time WWE Champion has added one more stipulation to the contest which bars McIntyre from bringing his Angela Sword at ringside and possibly using it utilizing the No Disqualification environment.

Nonetheless, Sheamus’ allies Butch and Ridge Holland aka The Brawling Brutes will be at ringside indicating that utter chaos will ensue. Plus, plenty more other weapons will also be available to be used by the two opponents.

Once the dust gets settled, the winner will be named the new challenger for the Undisputed WWE Universal Championship who will challenge the champion at Clash at the Castle premium live event in Cardiff, Wales on Saturday, September 3.

Roman Reigns is set to defend his Undisputed WWE Universal Championship at SummerSlam, tomorrow night in a Last Man Standing match against Brock Lesnar. Whoever wins this match will have a date with this week’s Smackdown main-event winner in the first week of September.

Next Friday on #SmackDown!

After weeks of being bruised and battered by The Viking Raiders, Jinder Mahal and Shanky wanted to seek redemption against them, last week. The New Day was providing commentary at ringside and it allowed The Vikings to take advantage.

Erik and Ivar sent Mahal into the veteran tag team duo of the WWE to escape the scene with a Count-Out victory. In the wake of the unprecedented win, Kofi Kingston and Xavier Woods will continue their brutal program with the two heels when they meet in the ring in what promises to be an explosive tag team contest.

Lacey Evans backed out of several scheduled matches over the past few weeks as she felt disrespected by the WWE Universe despite her heroic acts as a former Mariner. She verbally blasted Aliyah, last week before proceeding with a Woman’s Right cheap shot and thereby dodging in-ring competition.

WWE Offical Adam Pearce has now made it clear that Evans can’t evade the situation and must have to face Aliyah or else there could be repercussions.

So, it will mark Aliyah’s first televised match on TV in over a month after the June 3 edition of WWE SmackDown where she came up short in a Number-one Contender’s Six Pack Challenge for SmackDown Women’s Championship. Meanwhile, Evans will step into the ring for the first time since competing in the 2022 Women’s Money in the Bank Ladder Match.

During last week’s episode of SmackDown, Maxxine Dupri’s identity was revealed as she introduced herself as the new Director of Talent for Maximum Male Models agency. The kayfabe sister of the former director has taken charge from his brother and the former leader of the MMM agency, Max Dupri.

Going by the comments of Maxxine, Maximum Male Models will present the 2022 beachwear collection, this week to heat things up before SummerSlam.

The unveiling of the summer collection was originally set to go down, last week but the segment was canceled after reports claimed that Max Dupri has been written out of the storyline due to heel heat from the creative team.

Now, Maxxine, formerly known as Sofia Cromwell from NXT, has replaced him in the managerial role for the repackaged ma.çé and mån.sôör. Can she impress the WWE Universe when making a live-in-person appearance? We’ll have to tune in to get the answers on the go-home SmackDown episode for SummerSlam that airs on FOX.

Ariana Grande’s Epic Clapback Will Have You Saying Thank U, Next