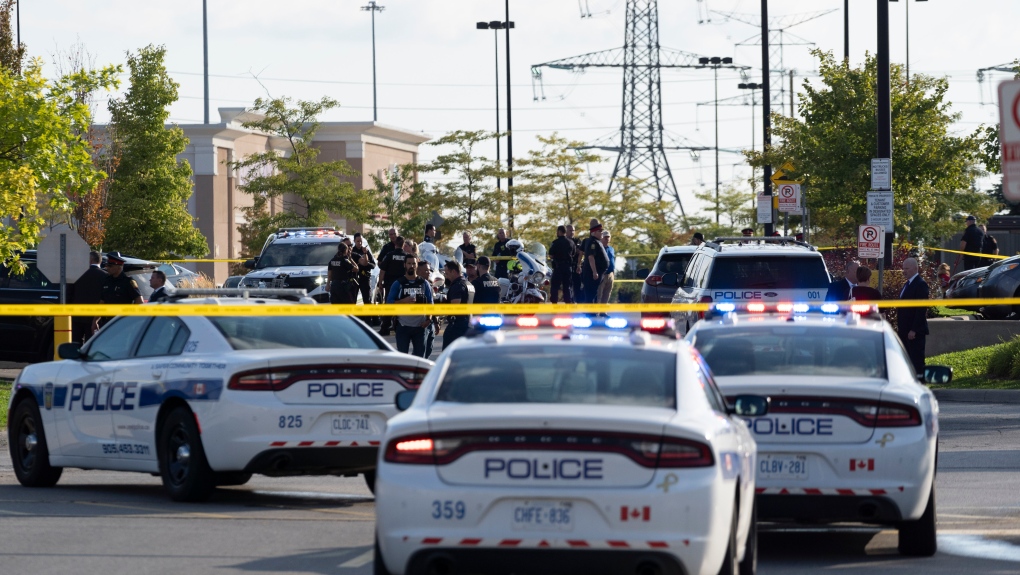 Police services in Windsor and Essex County are extending condolences after a Toronto police officer was shot and killed.

Const. Andrew Hong, 48, was fatally shot at a Tim Hortons near Argentia Road and Winston Churchill Boulevard at around 2:15 p.m. Monday as part of a shooting rampage that ultimately continued into Milton and left one other person dead and three injured.

Police sources tell CP24 that Hong was sitting at a table eating his lunch inside a Tim Hortons after participating in a training exercise with several other motorcycle officers. The sources say that the suspect then approached and shot him at point-blank range.

Police vehicles and officers are seen behind tape at a scene in Mississauga, Ont., Monday, Sept. 12, 2022. A Toronto police officer has been fatally shot and a suspect is in custody after two separate shootings left two dead and three injured in the Greater Toronto Area on Monday afternoon. THE CANADIAN PRESS/Arlyn McAdorey

LaSalle police also posted a message on social media about the “senseless act of violence.”

“LaSalle police extends our sincere condolences to the family, friends and colleagues of Toronot police Const. Andrew Hong, who was killed in the line of duty on Sept. 12 and also to the family and friends of the innocent victims of this senseless act of violence,” said the LaSalle police post.

Hong was a 22-year-veteran of the force who was also a married father of two.

He is being remembered by friends and colleagues today as a “gentle giant” who was “larger than life.”

With files from CP24.com’s Chris Fox.

Tesla vehicles can be stolen with new relay attack, but there’s a two-inch caveat

Number of people in UK with long-term sickness rose to record 2.5m in July