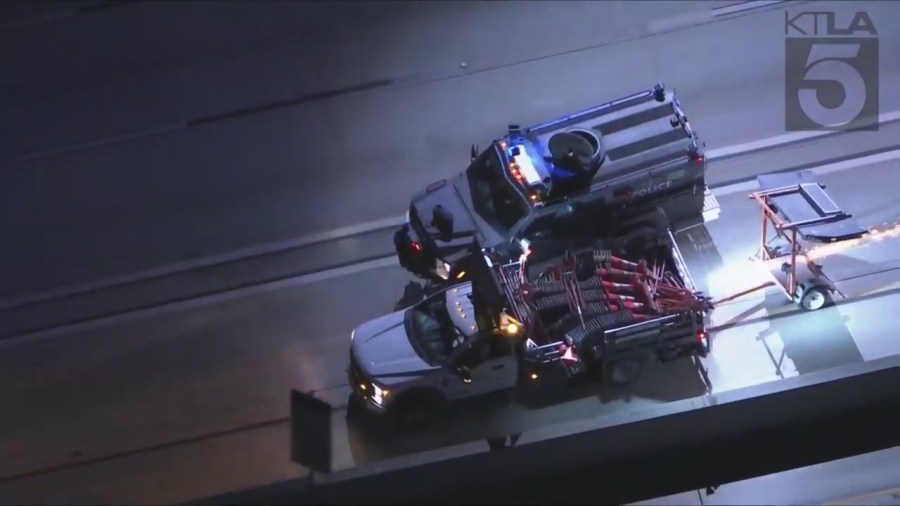 Law enforcement officers took a man into custody on the 10 Freeway Tuesday night after he led authorities on a wild high-speed chase in a stolen construction truck.

The pursuit began in a different vehicle in Ontario as Fontana police chased the same driver in a vehicle that then crashed and became disabled.

The suspect in the pursuit was armed with a firearm, police said, and he carjacked a construction truck loaded with cones and dragging a traffic control sign.

He led authorities on a chase from Ontario, to Montclair, then through Upland before he got back on the westbound 10 Freeway in the Pomona Valley.

Multiple attempts to stop the truck were unsuccessful until one of the vehicle’s tires was damaged and the traffic sign the truck was towing tipped over, sending sparks into the air and slowing the vehicle down.

The vehicle led police on the freeway, exited onto surface streets and into oncoming traffic, and returned to the freeway again, all the while dragging the traffic sign as it spewed sparks. The truck had a collision with at least one uninvolved vehicle as the driver attempted to evade authorities.

Law enforcement vehicles eventually gained on the slowing truck on the westbound 10 Freeway, including an armored SWAT vehicle that slammed the truck against the center divider to bring it to a stop.

After the truck was disabled, the driver immediately got out and took off on foot on the opposite side of the freeway where he narrowly avoided being hit by a vehicle.

He was then brought down by a police dog that chased him down on the shoulder of the freeway. The man was bloodied after being wrestled down by the dog and was taken into custody by officers.

The investigation is currently ongoing and the driver has not yet been identified. It’s unclear at this time what charges, aside from evading police, he will likely face.

Following the arrest of the driver in that pursuit, California Highway Patrol officers then engaged another vehicle that went around the roadblock that was in place for the stolen truck pursuit. That vehicle ultimately flipped after it failed to navigate a tight turn with officers on their heels.

The driver of that vehicle was also arrested.

The Kang Dynasty’ Means for ‘Shang-Chi 2′