Why the heck does Amazon sell seatbelt alarm blockers? 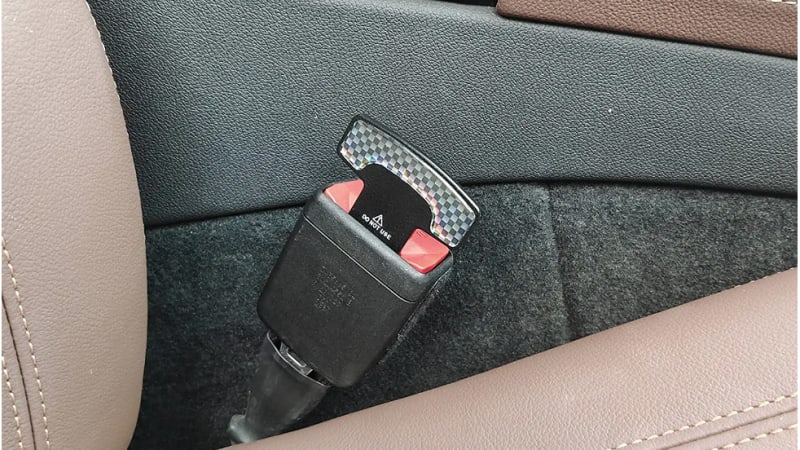 There was an obscure (in the U.S., at least) bit of car news this week out of India that raised new questions about the kinds of products Amazon stocks.

An Indian business tycoon named Cyrus Mistry died in a crash last weekend near Mumbai. Mistry, 54, was the former chairman of Tata Sons, the massive conglomerate that among other things owns Jaguar-Land Rover. Reports about the crash said Mistry wasn’t wearing his seatbelt, a circumstance that Reuters said was “reigniting the road safety debate in the world’s fourth-largest car market.”

Vehicle accidents killed more than 150,000 people in India in 2021. The World Bank said last year that India had a death on its roads every four minutes.

As part of the debate, India’s Transport Minister Nitin Gadkari this week called on Amazon.com to remove from its website listings for metal seatbelt-silencing clips. These clips are inserted in seatbelt slots to silence the alarm that typically keeps pinging when seatbelts are not in use. Presumably because Gadkari raised the issue, these devices must be popular over there, though it’s unclear whether Mistry or others in his car were using them. Amazon’s India site on Wednesday had several listings for these clips, priced as low as about $3.

Amazon responded on Thursday by removing the clips from its Indian marketplace listings. A search on the platform seemed to confirm the products had been pulled, and Amazon in a statement to Reuters said it takes strict action against sellers who violate Indian laws, “including listing of unsafe or non-compliant products.”

“The products in question are no longer available,” Amazon said.

Well that’s great. Great for India at least. It so happens that Amazon also sells these items on its U.S. site. They’re easy to find. We’re not going to tell you exactly what to search for, or provide you links, but if you really want such a thing, they’re there.

One design is even currently on sale for 10% off — and it comes in a four-pack, so pretty much everybody in your car can just go ahead and die.

Oh wait, you’re not supposed to use the clips that way? The product chatter states in a bad translation, “When passenger is in the seat, do not use this to plug in seat.” Some of these items are designed to look like bottle openers, which is either ingeniously dual-use or a cynical ploy at camouflage. One such clip is even stamped, “Do not use when passenger is in seat.”

The odd thing — odder even than the fact somebody dreamed these up — is that some of them have hundreds, even thousands, of five-star reviews. Here’s a typical review from user “F the Bing”: “Works great – quick delivery. Changed my life. No more bing-bing-bing.” Many of the reviewers claim they’re only using the devices at low speed “on the trails” or while “checking the cows.” Well, you wouldn’t want that pesky seatbelt alarm to stampede the cows.

If the cow-counting commenter isn’t feeding us a line of BS, then fair enough, there might be a few valid use cases. But it’s doubtful these folks are keeping the clips in only during these rare 5-mph examples.

Seriously, we get it. This is just one of thousands of battlefronts in the never-ending culture war between personal responsibility and government mandates. Without digging through thousands of pages of federal motor vehicle code, it’s hard to know whether these clips are illegal, but we do know that seatbelt use is required in every state (except for adults in New Hampshire), and for good reason. The evidence that seatbelts save lives is deeply documented and incontrovertible — they can’t work miracles in every crash, but overall they will improve your chances of survival by 60%, and I don’t know about you, but I’m a big fan of survival.

We’re all for personal responsibility instead of mandates — assuming people actually exercise it. And that’s the problem. Case in point, anyone who jeopardized others by refusing to wear a mask during a global pandemic just because they, what, thought it was effeminate or something.

As for someone going so far out of his way to skirt personal safety that he buys a product to facilitate it? Well that’s really putting yourself on the wrong side of the Darwin equation. Also, seatbelts, of course, are meant to work in concert with airbags. So if you defeat your seatbelt alarm and the crash doesn’t kill you, the airbag just might.

Fifty years ago, two-thirds of Americans didn’t wear seatbelts. By 2021, the National Highway Traffic Safety Administration determined that the holdouts had dwindled to 9.6%. Apparently that’s still enough of a market for Amazon to cater to.

There’s personal responsibility and government mandates — and then there’s corporate responsibility. Amazon, of course, sells millions of products. It must be devilishly hard to police them all, and easy for a few dangerous or misguided items to slip through. But now that Amazon knows about this particular type of product and has seen fit to pull it in India, why would it not simply do the same thing here?

Of course, there’s another way to get no more bing-bing-bing, and it’s absolutely free. Just buckle up.

“They cast me in films because they get an extra star in reviews, that star is me”, quips Vijay Varma in his roast!