Who Is The Mysterious Marvel Narrator Of All-Out Avengers? (Spoilers) 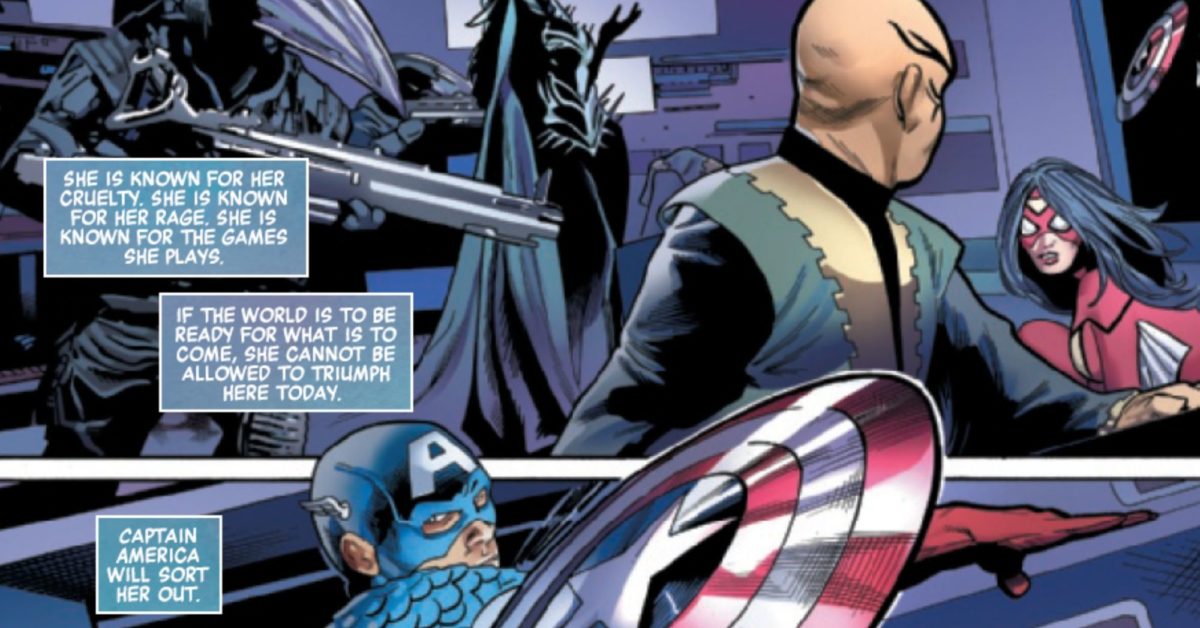 As Bleeding Cool previously reported, Marvel EVP Tom Brevoort talked to Andrew Sumner about what is behind All-Out Avengers #1 by Derek Landy and Greg Land, published by Marvel Comics today.

“There is an overarching storyline, an overarching mystery that Derek has set up… there’s no boring bits, like, it’s a comic where nobody stands around talking about things. There are no coffee room scenes in All-Out Avengers, those all happen in the issue before this one that you’re reading, and you’ll never see it. We have a weird Doctor Doom story in issue two; we have a very bizarre Red Skull story in issue three, so we’re using big iconic marvel villains and Marvel characters, there are a couple of new things as well. The thing that’s behind it is a very recognizable Marvel entity or force, but I don’t want to say too much about that and spoil things ahead of time… there is this larger concept and mystery that Derek has crafted does actually reward you as we peel back the onion further and further in each successive issue and you begin to get a greater awareness of what is actually going on and what the stakes are and so forth.”

Well, from the first issue, the caption text would be all wrong for Mephisto.

As we have something, somewhere. manipulating and using these Avengers, and all those around them, to… train them for something that is coming? Maybe.

Not just the Avengers but the world as a whole.

With (another) world-destroying threat on its way. But the Avengers really don’t know what’s going on.

And this entity intends to keep it that way. So that reality around them is an unknown unknown.

The entity has a lot of knowledge, and may just have been reading the Official Handbook To The Marvel Universe and taking notes. But it is, if nothing else, an old school fan. Probably hates She-Hulk twerking.

Even making corrections as they go along. Canon is canon after all.

Will whatever this threat involve Sinnar? Involve wormholes? How do Doctor Doom and the Red Skull tie in?

The unknown Marvel Entity does seem to be using the Avengers as canon fodder… typo intentional.

ALL-OUT AVENGERS #1
MARVEL COMICS
JUL220791
(W) Derek Landy (A/CA) Greg Land
INTRODUCING: THE ALL-NEW AVENGERS SERIES THAT STARTS IN THE MIDDLE OF THE EXPLOSIVE ACTION AND RACES TO A SHOCKING CLIMAX! An alien attack. A missing piece of wormhole tech. A city warped, its citizens transformed into hideous creatures loyal to an Empress from the far side of the universe. And a certain Captain Marvel, looking to her fellow Avengers with murderous intent… Plunge into the action and take a deep breath because you will not be allowed up for air as a thrilling new series kicks off in the strongest, strangest way possible.In Shops: Sep 07, 2022
SRP: $3.99

ALL-OUT AVENGERS #2
MARVEL COMICS
AUG220845
(W) Derek Landy (A/CA) Greg Land
The Avengers are on their knees, in chains and at the mercy of Doctor Doom. Their only hope lies in the one man with the strength, honor and sheer decency to possibly stand against the oncoming darkness: the hero the world knows as…Doctor Doom? Plunge into the action from page one and hold on for dear life, gentle reader – this tale doesn’t let up for a moment!
Rated T+In Shops: Oct 12, 2022 SRP: $3.99

ALL-OUT AVENGERS #3
MARVEL COMICS
SEP220859
(W) Derek Landy (A/CA) Greg Land
HALLELUJAH, IT’S RAINING SKULLS – RED SKULLS, THAT IS!
With an unending swarm of Red Skull LMDs on the loose, the Avengers have one last chance to turn the tide before they’re completely overwhelmed – even if that means teaming up with the original Red Skull to do it. Dive right in, dear reader, and get swept away by the action! RATED T+In Shops: Nov 23, 2022 SRP: $3.99