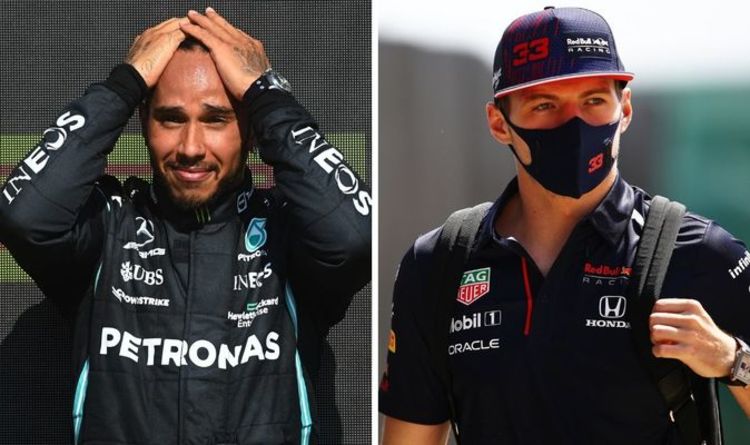 Formula One drivers have been reacting to the Lewis Hamilton and Max Verstappen drama which unfolded on Sunday, as the two championship protagonists went head to head in a heated battle that saw the Dutchman crash out on the very first lap of the British Grand Prix.

With Verstappen on pole, Hamilton piled on the pressure for the opening eight corners, trying to find a way around his main title rival, before making contact with the Dutchman at high speed, spearing the Red Bull driver into the barriers at Turn Nine.

Subsequently, the British driver was handed a ten-second time penalty, with Red Bull left fuming it should’ve been a more severe punishment after Verstappen was sent to hospital for further checks.

The Dutchman was released without any major injuries, however, the fallout seems to have left its mark on the F1 paddock.

Asked what the stewards believed Hamilton should have done differently to avoid the incident, Michael Masi replied: “I don’t know that they express a view of what he should have done but having looked at it all, their view was that he was predominantly to blame for that.”

The Ferrari driver Charles Leclerc, who finished second, had the best seat in the house, sitting just behind Hamilton as the pair tangled going into Copse, however, couldn’t commit either way as to who was at fault.

“Everything went very quick. Obviously, I could see there were quite a bit of things going around in front of me. And yeah, I think it’s a racing incident.

“It’s quite difficult to put the blame on one or the other. Obviously, there was space on the inside. Maybe Lewis was not completely at the apex but it’s also true that Max was quite aggressive on the outside. So, things happen.

“What is the most important today is that Max is unharmed and is fine.”

Daniel Ricciardo, who finished fifth for McLaren on Sunday gave his assessment of the day’s major talking point while watching the replay.

“When you’re in such a high-speed corner and just side-by-side, you’re both going to lose aero, particularly Lewis there with Max kind of in a little bit of dirty air,” Ricciardo said.

“But I think they were both going in hot.

“Ultimately Lewis went in too hot for the given level of grip and that’s where you see [he] just drifted up into Max.

“Completely unintentional, but just the nature of the aero on these cars and [you] just have to allow a little more.

“But I’m certainly not going to sit here and judge and say he should have done that or that.”

Alpine’s Fernando Alonso also gave his view, admitting “Lewis could not disappear” as the two went wheel to wheel.

“It’s difficult from the outside,” said Alonso, quoted by The Race. “It looked quite close. Lewis had more than half a car alongside Max,” said the two-time world champion.

“So, in a way, Lewis could not disappear from the inside line. It’s not that you can vanish.

“It was an unfortunate moment of the race, but nothing intentional or nothing any of the two drivers did wrong in my opinion.

“That was an unlucky moment.”

Fellow Spaniard Carlos Sainz Jnr, Leclerc’s Ferrari team-mate added: “I obviously had a look at it, and honestly I had a bit of mixed feelings with the accident. First of all, wishing Max a speedy recovery because I heard the crash was quite big,” Sainz told Formula 1.

“The accident itself I think is very difficult to judge. Only both know what they could have done differently to avoid the crash. It was very tight, they are obviously fighting for big things and I’d prefer not to judge too much.”

Meanwhile, Red Bull test driver Alex Albon admitted “this has been brewing since race one of the championship”.

He added: “Part of me thinks Max could have closed [the door] to stop Lewis from ever going into that position, but at the same time…when Lewis overtook Charles, it was a similar position to me, maybe slightly different angles.”

Verstappen still leads the driver standings but had a 33-point lead slashed to just eight thanks to the crash.

Red Bull’s lead in the Constructors’ Championship also took a beating and was cut from 47 to just four over Mercedes.

Queen Elizabeth: Her morning routine since 1952 from breakfast to a bath