When curved materials flatten, simple geometry can predict the wrinkle patterns that emerge 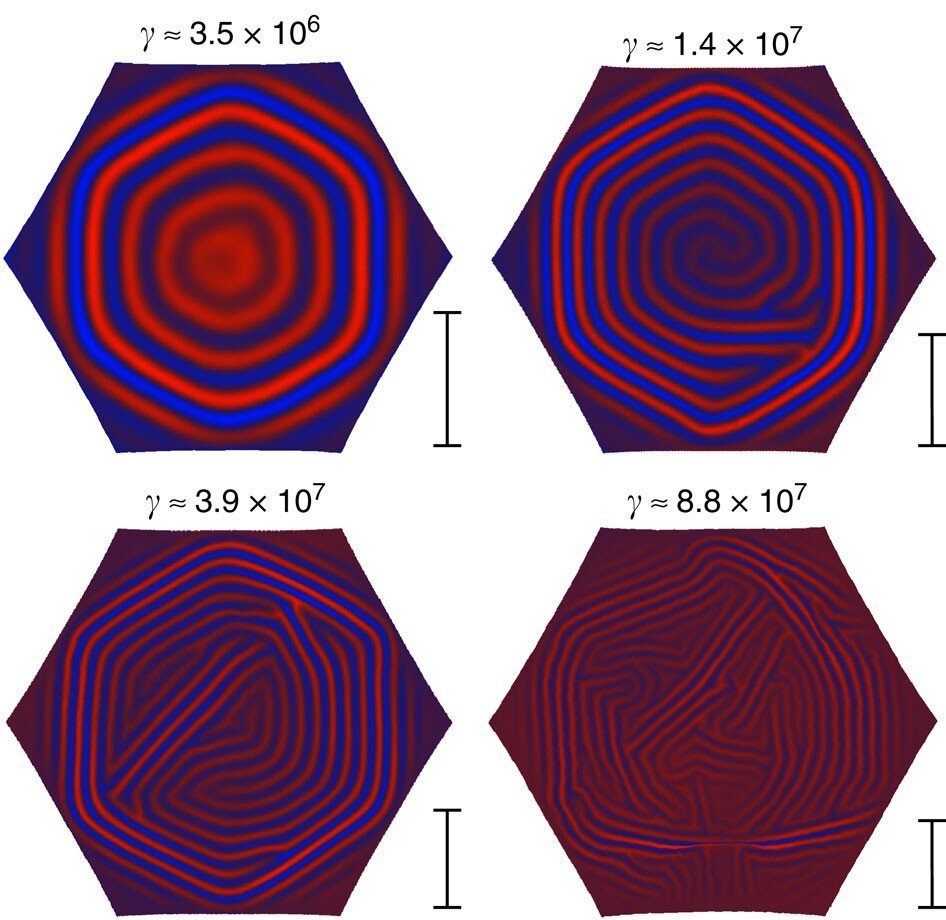 An object that’s intrinsically flat, say a piece of paper, can be shaped into a cylinder without stretching or tearing it. The same isn’t true, however, for something intrinsically curved like a contact lens. When compressed between two flat surfaces or laid on water, curved objects will flatten, but with wrinkles that form as they buckle.

Now, research from the University of Pennsylvania, the University of Illinois Chicago (UIC), and Syracuse University has shown that with some simple geometry it’s possible to predict the patterns of those wrinkles, both where they will form and in some cases their direction. The findings, published in Nature Physics, have a range of implications, from how materials interact with moisture and reflect sunlight in nature to the way a flexible electronic might bend.

“The beauty of this work is how simple it really is,” says Eleni Katifori, an associate professor in Penn’s Department of Physics & Astronomy. “What’s behind it is very complicated, the physics that’s translated through these rules we found, but the rules themselves are very simple. It’s inspiring.”

Meeting of the minds

Since her Ph.D. work, Katifori has been interested in the mechanics of how thin membranes curve. Though this remained a curiosity, her research path veered toward fluid-flow networks instead. Then, while collaborating on a project with Penn colleague Randall Kamien and then postdoctoral fellow Hillel Aharoni, Katifori observed something she couldn’t explain at the time. “That is, we noticed the wrinkles form in domains,” she says.

In other words, when a curved surface gets flattened, it ends up with excess material and subsequent wrinkles. Those wrinkles emerge in patterns or sectors. “The question became, why do the wrinkles arrange in that way?” says Katifori. “We didn’t understand how important the domains in the wrinkling truly are.”

At a conference in 2016, mathematician Ian Tobasco, an assistant professor at UIC, heard Aharoni give a talk on the subject. “It was the first time I saw this model system being presented,” Tobasco says. “I thought it was really cool.” In mid-2017, Katifori, Aharoni, and colleagues published findings on the subject in Nature Communications, then at a workshop later that year, Tobasco met Joseph Paulsen from Syracuse, who had presented preliminary data on the experimentation his group had done on wrinkles.

In early 2018, Tobasco started working in earnest on a mathematical theory for wrinkles, and over lunch at a conference that summer, Katifori, Tobasco, and Paulsen agreed they shared an interest in this problem. They decided to collaborate, with a focus on parsing how much the material’s physical shape and the curvature from which it starts might matter to the wrinkling patterns.

Working through the problem

For some background, curvature can be positive, like the roundedness of a baseball or a globe, or negative, like a horse’s saddle or the spot on a glass bottle where the neck meets the base. There’s also flat material, like a piece of paper.

In this work, the researchers focused on positively and negatively curved shells.

From each they then removed basic shapes, like triangles, squares, and ovals. “Think of a cookie cutter. Let’s say I take an object with a positive or negative curvature, then I cut out one of these shapes and lay it on liquid,” Katifori says. Would it be possible to guess the wrinkle patterns and calculate the direction the wrinkles would flow? For each shape, Tobasco would solve the theory based on the fundamental principles he’d worked out and published on, then come up with predictions.

Based on those findings, Katifori and Penn postdoctoral researcher Desislava Todorova then conducted simulations, inputting individual shapes and parameters into a computer program. Similar work was happening in the lab run by Paulsen, an assistant professor of physics at Syracuse, through experiments he was running on polystyrene film 1,000 times thinner than a piece of paper. “It’s made from the same material as packing peanuts,” Tobasco says, “but instead of the three-dimensional shape of a packing peanut, imagine it’s flat like a sheet.”

Through the simulations, experimentation, and much back and forth to refine the process and expand on the original theory, the trio began to discern that by applying straightforward geometric principles, they could know ahead of time what pattern the wrinkles would take and for a subset—what they describe as “ordered” wrinkles—which direction they would run.

To explain one such principle, Katifori uses a five-sided polygon. “First I inscribe a circle in the polygon,” she says. “The points where that circle touches the edges of the polygon determine where I draw my lines.” She pauses to create a second shape inside the first, this one with four uneven sides; she starts each line where the circle and outer polygon meet, connecting all four inner lines. “Now I have one, two, three, four, five domains,” she continues, pointing out the quintet of newly cordoned-off sections.

For simple shapes like this, the outer sections will contain ordered wrinkles, which are organized and orderly, following the direction of the inner lines Katifori drew. Within the new inner polygon, wrinkles still form, but they remain disordered and unpredictable.

Tobasco points to another example, one he determined was universally true for shapes cut from negatively curved shells. “In the end, it’s very straightforward to predict the wrinkle patterns. All you have to do is draw line segments that meet the boundary at a right angle.” In other words, start at a point within the shape and create a direct line to the shape’s edge, but only at a spot where a right angle will then form.

That took a year for the team to understand. “The equations that determine the layout of wrinkles are horrendous to solve, and many of the patterns we observed in our experiments and simulations are quite complicated,” Paulsen says. “But it turns out that under a certain set of conditions, you can predict the wrinkle layout with a simple set of rules. That means that we now have a quick, efficient way to design wrinkle patterns.”

“Its simplicity is beautiful, and it’s also useful,” he adds, particularly for wrinkled surfaces that serve a function like allowing for adhesion or fluid flow.

Katifori mentions similar examples. “Let’s say there is humidity or moisture in the air. Water will behave differently in the valleys and the hills of a grooved surface,” she says. “By controlling the wrinkle pattern, maybe you can affect how the water will condense.”

The researchers still have more to understand about these complex textured surfaces, like how to pull patterns from disordered wrinkles, why ordered and disordered domains can coexist, and why there’s a “reciprocity” linking negatively and positively curved shells, meaning once the pattern for one is determined, it’s straightforward to predict the pattern for the other.

For now, however, they say they’re excited about the potential for what they have learned to this point.

“You have a complicated theory that, at the end of the day, boils down to relatively simple mathematics that almost anyone can do with a compass and a ruler,” Katifori says. “It’s an elegant and beautiful solution to a complex problem.”

Using math proofs, experiments and simulations to show how a material wrinkles when flattened

Lord of the Rings: Heroes of Middle-earth gets its first bit of gameplay in new trailer

NYC Key Art Urges Us to Give In

Civilian and Veteran Entrepeneurs, Take a Look at These…