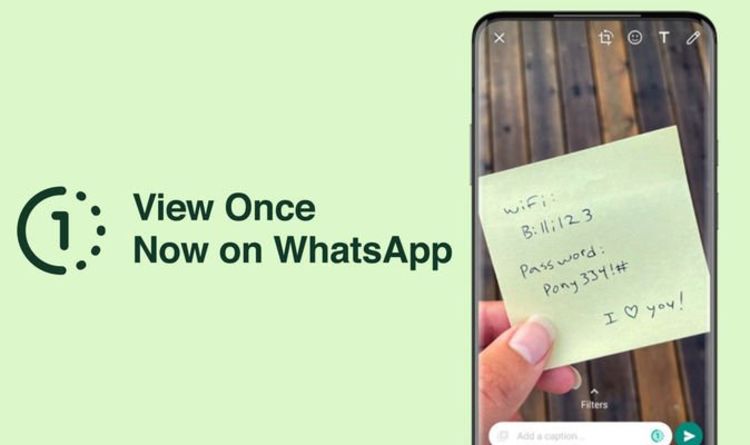 WhatsApp users can now send self-destructing photos and videos within the chat app. Included in the latest update, “View Once” lets users send media that can only be viewed once – after it’s seen by the recipient, it will be automatically deleted.

Media sent using the View Once feature will not be saved to your recipient’s smartphone – even if they usually have their WhatsApp settings set-up to automatically save photos or videos received in chats.

Even inside the WhatsApp chat itself, once a View Once photo or video is opened it can’t be viewed again. This media can’t be forwarded, saved, starred or shared, WhatsApp has confirmed.

And if the View Once photo or video is not opened on WhatsApp within 14 days it will automatically be deleted.

However, WhatsApp users have been warned only to send this type of media to trusted contacts. That’s because a recipient can still screenshot a View Once photo or video.

To use the View Once feature, make sure your WhatsApp has been updated to the latest version. Then, you’ll need to begin sending a photo or video to a contact as you usually would.

So that means opening an individual chat or group conversation on WhatsApp, and then adding a picture or video – either via the Camera icon on iOS or with the Attach paperclip symbol for Android.

Then before you press send hit the new View Once icon, which is located on the right hand side of the text bar.

The View Once symbol is a number one numeral which has a circle round it. Half of the circle is made up of dots.

After clicking the View Once symbol and activating it then press send.

View Once media can also be sent on Web and Desktop as well as KaiOS.

Speaking about the new feature, WhatsApp-owners Facebook said: “While taking photos or videos on our phones has become such a big part of our lives, not everything we share needs to become a permanent digital record. On many phones, simply taking a photo means it will take up space in your camera roll forever.

“That’s why today we’re rolling out new View Once photos and videos that disappear from the chat after they’ve been opened, giving users even more control over their privacy.

“For example, you might send a View Once photo of some new clothes you’re trying on at a store, a quick reaction to a moment in time, or something sensitive like a Wi-Fi password. “

WhatsApp added that, like with personal messages, View Once media will be protected by end-to-end encryption so the chat app won’t be able to see it.

Messages sent via View Once will be shown in chats with a new “one-time” icon. After that the media will appear as “opened” in the chat history.

View Once is rolling out to all WhatsApp users starting from this week.

Diablo Immortal has been delayed into 2022