What we know about the Ohio measles outbreak 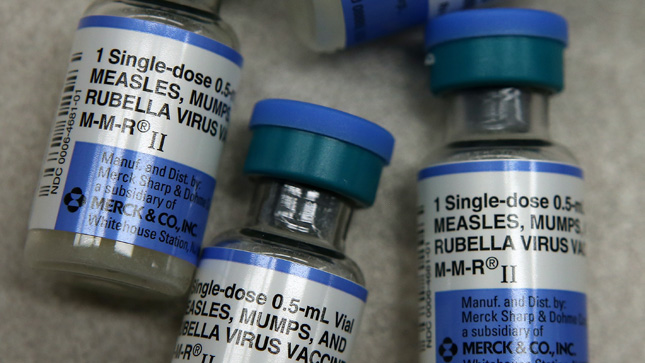 (The Hill) – A measles outbreak in Ohio is raising concerns about the spread of the disease and how a decline in vaccination rates among children might be leading to additional outbreaks.

Eighty-five cases have been reported in Ohio as of Friday, mainly in Columbus and other parts of Franklin County, according to Columbus Public Health. Most of these cases were in unvaccinated children. Hospitalization was required for 34 of those who were infected.

It’s not the only recent measles outbreak in the country.

The outbreaks, which come amid a rise in anti-vaccine sentiment, are raising worries among health experts about whether lower vaccination rates will lead to further spread of diseases that can be safeguarded against by vaccines.

“With any of the vaccine preventable illnesses, we always worry about when there’s not enough herd immunity,” says physician Susan Koletar, director of the Division of Infectious Diseases at The Ohio State Wexner Medical Center.

Herd immunity occurs when enough people are immune through vaccination or natural infection to stop an illness from spreading. Measles is so contagious that immunization rates need to be at least 95 percent to eliminate the disease.

The Ohio outbreak began in October 2022, with the bulk of cases occurring in mid-November to early December. These community cases are thought to be linked to one of four travel-related measles cases, says physician Mysheika W. Roberts, who is the health commissioner for Columbus.

Although most of the cases are in unvaccinated children, six of the children had received their first of two doses of the combined measles, mumps and rubella (MMR) vaccine. Another twenty-four of the children were too young for any doses, according to the agency’s website.

The U.S. was declared measles-free in 2000, but travelers periodically bring in infections. People who visit countries where measles is endemic, meaning there is regular transmission in the population, can return to their home communities and seed a local outbreak.

“The mere fact that individuals who were not vaccinated, traveled to a measles endemic country and then were allowed to come back into the United States, where they likely instigated this outbreak is concerning to me as a public health professional,” says Roberts.

One of the potential reasons these measles outbreaks may be happening is that vaccine coverage rates fell during the pandemic.

The Centers for Disease Control and Prevention (CDC) report that vaccination rates among kindergarteners are high, but coverage for the 2021-2022 school year dropped to 93 percent compared to 95 percent for the 2019-2020 school year.

The risk of contracting vaccine preventable diseases has been particularly heightened for children who are in low-income households or live in rural areas, as vaccine coverage decreased for those groups by 4 to 5 percent during the pandemic, according to the CDC.

That drop in childhood vaccinations in part stems from disruptions during the pandemic, as well as financial and logistical hurdles, the CDC reported. But rising vaccine hesitancy and the anti-vaccine movement have also contributed, and are a major factor driving recent measles outbreaks.

The U.S. saw its highest annual number of measles cases in recent history in 2019 with 1,274, most of which occurred in eight underimmunized communities, according to the CDC.

“I think many parents feel like since they don’t see measles in our community, that it is safe for them to not get their child vaccinated,” says Roberts.

She attributes some of the vaccine hesitancy to the circulation of misinformation. A debunked theory linking the MMR vaccine to autism is one example. Baseless concern driven by that theory may lead some parents to delay MMR vaccination until right before their child enters school, which could mean the child gets their first dose when they are about 4 years old instead of 12 months old.

The MMR vaccine has been around since the 1960s and is very, very effective, notes Roberts. “We didn’t get to eliminate measles without the MMR vaccine.”

The politicization of vaccines during the COVID-19 pandemic has also fueled anti-vaccine attitudes, she says.

“The anti-vaxx [and] the vaccine hesitant community has probably grown as a result of this pandemic and spilled over from the COVID-19 hesitancy to all vaccine hesitancy,” Roberts notes.

Each family may be weighing their own personal risk and making decisions that way, says vaccine safety researcher Elyse Kharbanda. Willingness to get vaccinated may increase when transmission is high or there is recent memory of an outbreak, but once that goes away, vaccine acceptance may subside, she continues.

Amid the dropping vaccination rates, Koletar is concerned that there could be an uptick in other vaccine preventable diseases, like tetanus, rubella and chickenpox. Rubella can be harder to diagnose than measles and may go undetected at times, according to Koletar.

People in their late teens and adults who have neither had chickenpox nor been vaccinated against it can get really sick if they get chickenpox, she adds. “As a physician, those are frightening times, particularly if you have a young pregnant woman who gets chickenpox.”

For now, the situation looks positive in Ohio. The most recent measles case was detected on Dec. 24, which means if there are no new cases through Feb. 4 the outbreak may be declared officially over.

Looking ahead, there’s a need for more research into what interventions would help get more people in vaccine resistant communities to accept vaccines, according to Kharbanda.

Interventions like alerts and letters are “effective at promoting vaccination to families who intend to vaccinate their children and just got busy and forgot,” Kharbanda tells The Hill.

But “those types of simple interventions really don’t work with families and communities that are fearful and vaccine resistant,” she says. It takes time and good relationships with communities to understand what beliefs are perpetuating vaccine hesitancy and to gain trust, she adds.

Eskom bosses head for emergency meeting with the president