We’ve been tracking birds in a small Nigerian forest for 18 years. What we found and why it matters 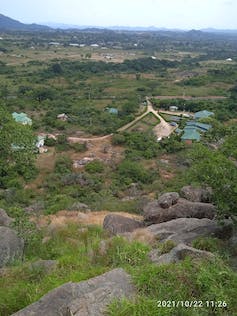 If you live in Europe, you can find almost any statistic you like about the birds in the environment. How many there are of a species, where you find them, whether their population is increasing or decreasing. In some countries like the UK there are comprehensive surveys going back 60 years and they have mapped and counted every single bird species three times already.

These detailed statistics allow effective monitoring of the environment. This is because birds are an indicator species of how well the ecosystem is functioning to provide food, clean water, good soil and quality of life for people.

In West Africa, there’s virtually no systematic monitoring of bird population trends. But this is changing. Initiatives and research led by the AP Leventis Ornithological Research Institute at the University of Jos, north central Nigeria, have started the process of long term monitoring of birds – and thus the environment generally – in Nigeria.

Recently scientists at the institute have compiled some of the monitoring data collected from the Amurum nature reserve over 18 years. Amurum is a small (about 300 hectare) piece of wooded savannah surrounded by farmland where the institute was built.

The team’s findings on bird populations and related environmental conditions have been published in Ostrich, Africa’s premier bird journal. They show that the populations of most bird species in the reserve have been stable or have increased over this period. This is encouraging because it shows that simple protection of a small habitat fragment can yield generally positive population benefits.

The study is also encouraging in the sense that it has trained people who can do similar work on a bigger scale.

Aurum Forest Reserve is a newly protected area on the outskirts of Jos, north central Nigeria. Our team of students and graduates used mist netting to monitor bird population trends in the reserve from 2002 to 2019. We modelled the 18-year changes in trends of migrant and local bird species and related this to any changes in annual environmental site quality using data about vegetation and rainfall.

In our study there were 10 migrant species that breed in Europe but spend most of their non-breeding time in Africa, and 41 common resident bird species.

Bird ringing is an effective way of monitoring bird populations. It involves putting up lots of mist nets which, because they are more or less invisible, intercept flying birds which then fall into pockets of netting that they cannot get out of. A trained person can safely extract the birds from the net and mark them by putting a metal ring with a unique number on their leg. They are released and return to the environment unharmed. Then when the nets are put up a month or two later, as well as new birds, some of these previously ringed birds are recaptured if they are still alive and still in the area.

With a few of these ringing sessions through a year carefully using the same amount of effort and location each time, a few recaptures, and some maths, you can then work out abundance and survival of bird populations. You can even monitor how well a species is doing in terms of breeding by comparing the ratio of juveniles to adults caught.

We also collected data from satellite remote sensing that measured the greenness of vegetation – which shows where it is and how much of it there is. Rainfall data was collected too. Vegetation and rainfall records were compared with the changes in bird numbers.

Read more:
Eyes in the sky and on the ground are helping forest conservation in Cameroon


Most bird species’ populations were found to be stable; 30% of migrants and 7% of residents increased, while 10% of migrants and 29% of residents declined moderately. Vegetation cover increased and the rainfall pattern was stable. This suggests that environmental conditions at the site improved slightly during the period. However, only a few species showed significant correlations of population trends with vegetation productivity and rainfall.

Overall, the results suggest that population changes locally for both migrant and resident bird species were similar, being reasonably stable or increasing. This may reflect the fact that the monitoring was done within a newly protected area which is the best habitat in the wider locality.

Those species that declined were mostly associated with open, grassland areas that will have decreased as human influences were reduced at the study site.

But these specific results are not the only story here. Changes at Amurum Forest, although positive and encouraging, don’t matter much on an African scale. But its example does. What’s important is that the process of monitoring has started and people are being trained to do it elsewhere on a wider scale.

Bird ringing is a powerful method, but it takes long term commitment and properly trained people.

The AP Leventis Ornithological Research Institute was founded in 2002 as the first (and still only) one of its kind in West Africa. Its mission is to increase the capacity in Nigeria for environmental research and conservation by training master’s students in conservation biology. Part of this training involves direct experience of survey and monitoring of animals and plants and particularly birds. It has been running a bird ringing scheme since it started.

Read more:
Why a proper record of birds in Africa is so important — for Europe


The institute has now produced about 150 trained personnel spread throughout West African universities, conservation NGOs and government institutes or ministries. They know the importance of environmental monitoring. They know how to do it. They have the passion to influence others to do it.

It might just be relatively few experts counting birds, but it can lead to proper stewardship of the environment for everyone.

7 Signs You Could Be Spending More of Your Retirement Money