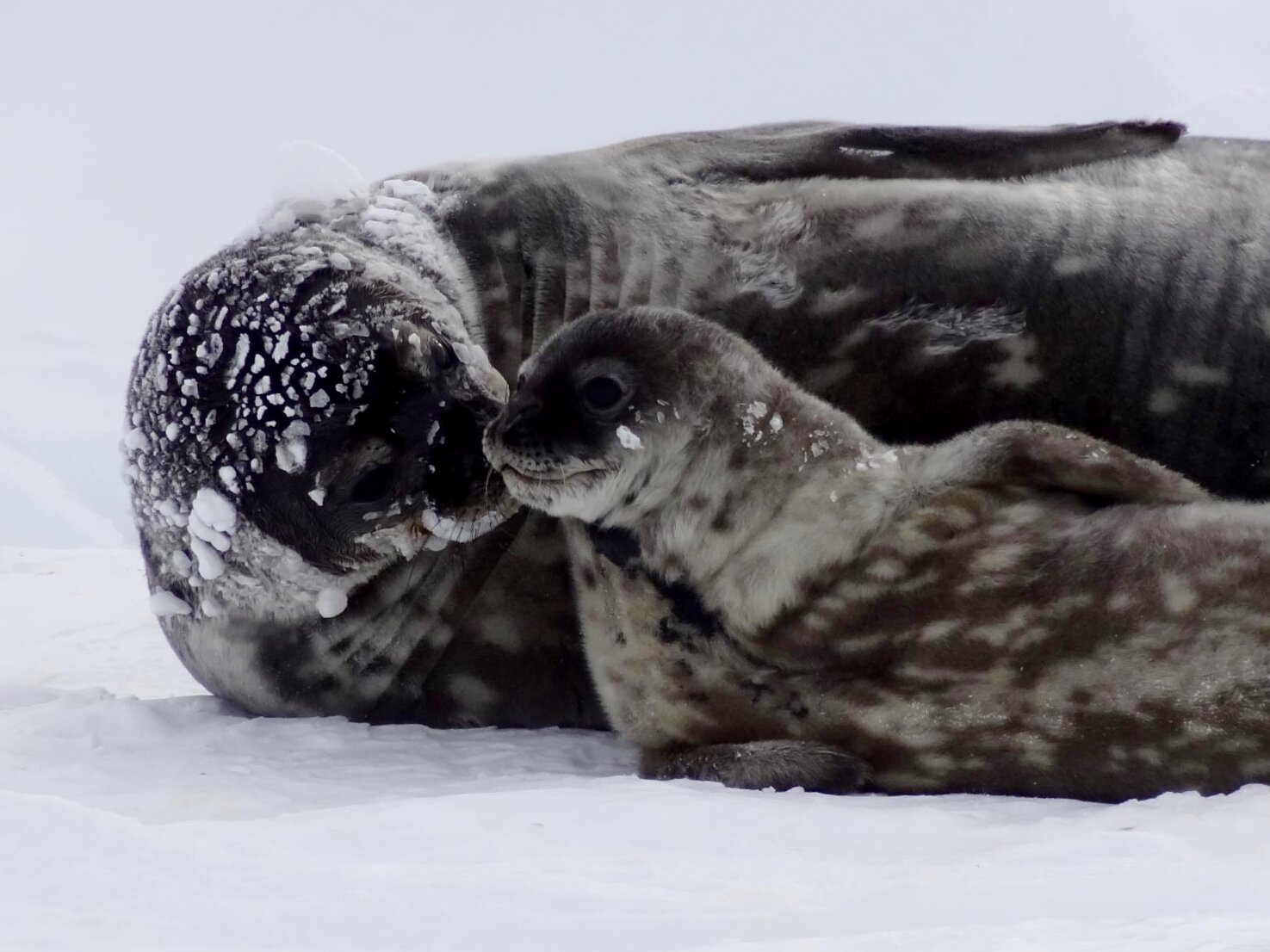 Weddell seals are excellent divers, and provide so much iron to their pups during lactation that the mothers dramatically limit their own diving and underwater foraging capabilities.

This is according to a new paper, “Iron mobilization during lactation reduces oxygen stores in a diving mammal,” published in Nature Communications.

“Offload of large amounts of iron hinders female Weddell seals’ ability to maintain their own endogenous heme [hemoglobin and myoglobin] stores, and post-partum females have shorter dive durations following weaning than skip-breeders,” the paper states, referring to non-breeding seals that were used as a control group in the study. “High iron demand during lactation ultimately impacts dive capacity as a cost of reproduction in marine mammals.”

Seals have much greater iron loads than terrestrial mammals because the seals need those proteins to carry oxygen in their bodies, says Michelle Shero, assistant scientist at Woods Hole Oceanographic Institution’s (WHOI) Biology Department and lead author of the paper. “That basically acts as a sort of internal scuba tank for those animals that allows them to dive for so long,” says Shero. “The females are essentially transferring their dive capacities to the pups when they nurse, through this transfer of iron. No one has looked at that before.”

Based on mean milk iron concentrations determined in the study, a female seal transfers 309-614 milligrams of iron per day to her pup. “This is an exceptional rate of transfer relative to terrestrial mammals,” according to the paper, which notes that the rate is 8-15 times higher than doses that exceed daily upper limits and result in iron toxicity for humans despite a relatively similar body size between an adult human and a nursing Weddell seal pup.

Weddell seals are exceptional divers, routinely diving and foraging underwater for 20 minutes at a time, with the longest recorded dive clocking in at 96 minutes. However, when the seals are lactating, they provide to their pups an enormous amount of iron, which the mothers normally would utilize to maintain high tissue hemoprotein levels to carry oxygen for those dives, the study notes.

Post-partum female dive durations declined, and late summer dives were the shortest in duration when compared to the rest of the year, according to the study.

The paper notes that reduced physiologic dive capacity typically would be detrimental to a seal’s recuperation of body mass and lipid stores post-weaning. However, in Weddell seals the impacts of reduced aerobic dive capacities “may be mitigated if tightly linked with the seasonal pulse of productivity in the high-latitude Antarctic environment,” the paper states. “The fact that post-partum females gained mass during the late-summer period despite their shorter dive durations indicates that they were not too adversely impacted by reduced post-weaning dive capacity.”

The paper cautions, however, that “the precise temporal matching of decreased dive potential with the seasonal pulse of productivity may make this species more vulnerable to climate regime shifts that would decouple these events.”

“It’s pretty striking that the females wean their pups during this time when there is a lot more productivity around, and when that productivity seems to be shallower in the water column,” says co-author Jennifer Burns, professor and chair of the Biological Sciences Department at Texas Tech University. “The female seals’ dive capacities are limited, but they may not need to work as hard to still catch prey. Similarly, even though their pups have lower dive capacity than their mothers, being weaned during a period of high productivity may help their foraging, too. However, if the timing of the pulse in productivity changed, the seals would likely not be able to forage as successfully.”

Shero adds that “in the long-run, if the environment changes such that the seals have to start catching fish species with low iron, that is going to influence the seals’ iron physiology, how much they can store in their bodies for these long dives, and how much they can provide to their pups.”

Shero, who has been studying Weddell seals in the Antarctic since 2011, says it is “a privilege” working with this iconic species.

“I would like this study to help open up the field of iron physiology and how it impacts the seals’ ability to dive and rear their pups,” says Shero. “I think there is just a lot more to the story than simply looking at the number of fish the seals can catch when we are trying to assess animal health.” She says iron dynamics also should be taken into consideration for seal conservation management efforts. Burns echoes this sentiment, saying that “certain types of prey may be more important than previously recognized, especially during particular times of the year such as just before giving birth and just after weaning, when iron intake may be critical for both mothers and their pups.”

Scaling up breastfeeding can curtail infant and maternal deaths

How to cancel Discord Nitro on desktop or mobile