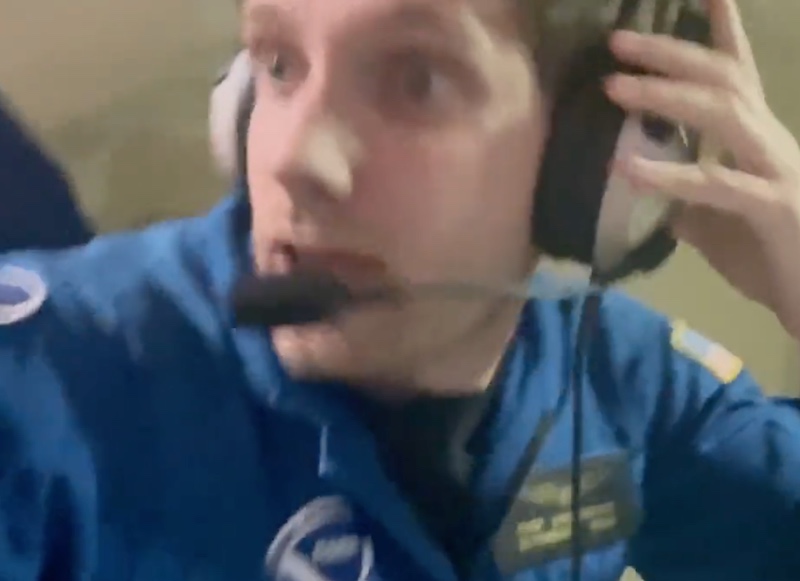 As millions of Florida residents braced themselves for Hurricane Ian as it barreled toward the state on Wednesday, a team of National Oceanic and Atmospheric Administration (NOAA) personnel jumped on a plane and headed straight for it.

Dramatic video footage (below) captured by NOAA engineer Nick Underwood shows the aircraft rocking and rolling in some serious turbulence as it passed through the hurricane, with a particularly nasty bump taking place at the 2:06 mark.

The rough ride will have been fully expected — you just needed nerves of steel and a rock-hard stomach to be able to handle it. Still, for Underwood, the extent of the turbulence appeared to come as something of a surprise.

“When I say this was the roughest flight of my career so far, I mean it,” Underwood said in a tweet accompanying the footage. “I have never seen the bunks come out like that. There was coffee everywhere. I have never felt such lateral motion.”

Aftermath of the galley. pic.twitter.com/YsomJw2J5f

To be clear, the NOAA team didn’t fly into the eye of the storm for fun. Instead, the aircraft — essentially a high-flying meteorological station — gathered data to help forecasters make accurate predictions. The data is also handed to researchers seeking to learn more about storm processes, which in turn can help to improve forecast models.

The aircraft that Underwood and his team flew aboard was one of NOAA’s two Lockheed WP-3D Orion planes, with this particular one nicknamed Kermit.

Scientists on these missions deploy GPS dropwindsondes — parachute-equipped scientific instruments — that are dropped from the aircraft as it flies through the hurricane.

“These instruments continuously transmit measurements of pressure, humidity, temperature, and wind direction and speed as they fall toward the sea, providing a detailed look at the structure of the storm and its intensity,” the Office of Marine and Aviation Operations explains on its website. “The P-3s’ tail Doppler radar and lower fuselage radar systems, meanwhile, scan the storm vertically and horizontally, giving scientists and forecasters a real-time look at the storm. The P-3s can also deploy probes called bathythermographs that measure the temperature of the sea.

“In addition to conducting research to help scientists better understand hurricanes and other kinds of tropical cyclones, NOAA’s P-3s participate in storm reconnaissance missions when tasked to do so by the NOAA National Weather Service’s National Hurricane Center. The purpose of these missions is primarily to locate the center of the storm and measure central pressure and surface winds around the eye.”

As #HurricaneIan churns near Cuba, #GOESEast can see its distinct eye as well as #lightning flashing around the storm.#Ian is a major Category 3 #hurricane that is continuing to strengthen in the southeastern Gulf of Mexico.

Hurricane Ian left Cuba without power after hitting the island on Tuesday. At the time of writing, it’s too early to know the full extent of Hurricane Ian’s impact on Florida, but the ferocity of the storm suggests there will be some serious damage.

5 great Pegassi vehicles that are worth owning in GTA Online

What this brand new newborn does will break your heart!…