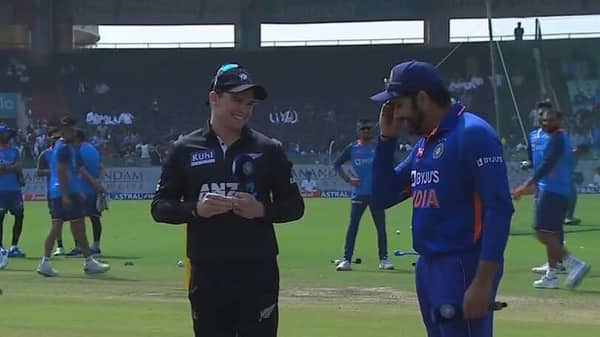 Cricket as sport is not just about athletics, sportsmanship, nail biting chases or death-over anxieties but also some light moments that make the fans of the sport love the game even more. The toss in the India vs New Zealand ODI on Saturday was one such moment when the Indian skipper Rohit Sharma blanked out for a moment.

Before going for the toss, captains do discuss their options with the team management, including whether to bowl first or bat first. Although India’s captain Rohit Sharma acknowledged having “plenty of discussions” about it, he ended up having an epic brain-fade when he won the toss and chose to bowl instead of bat, leaving the captain of New Zealand, Tom Latham, and the match official, Javagal Srinath laughing.

The coin was tossed by Rohit. to which Latham “Heads”. The Indian team won the toss. Rohit, however, was seen I nconsolably scratching his head, he eventually hesitantly, said, “we will bowl first,” as Latham and Srinath couldn’t stop laughing.

When Ravi Shastri asked him on the brain fade moment, he said “I forgot what we wanted to do, had plenty of discussions with the team about the toss decision, just wanted to challenge ourselves under difficult conditions, but we’ll bowl first.”

Denial of responsibility! My droll is an automatic aggregator of the all world’s media. In each content, the hyperlink to the primary source is specified. All trademarks belong to their rightful owners, all materials to their authors. If you are the owner of the content and do not want us to publish your materials, please contact us by email – [email protected]. The content will be deleted within 24 hours.
India vs New Zealand 2nd ODIRohit SharmaTom Letham
0
Share

11 celeb-loved luxury lingerie brands to splurge on in 2023