Jonathan Thurston and Paul Gallen have clashed over referee Todd Smith’s decision to send off Nathan Cleary for his dangerous tackle on Dylan Brown.

Gallen suggested it was a reaction to the precedent set by Karl Lawton being sent off earlier in the year for a similar incident, but Thurston believes it’s a “send off every day of the week”.

However, despite believing Cleary deserved to be sent from the field, Thurston doesn’t believe the star Panther is a dirty player.

“It’s uncharacteristic from Nathan. I don’t see him as a dirty player, but he’s got his hand in that position in his groin. He’s lifted him up and he’s drove him straight into the ground,” the Cowboys great said.

“I think he could be in even more trouble because he rearranged his right arm. He’s got his arm around his back and then he rearranges it and puts it in between (Brown’s) legs.

“So you can see the intention is there to lift him and it’s gone horribly wrong for him. I don’t think he’s a dirt player at all.

“This is not in his game, but he’s made a second effort with his leg and he’s got him in a dangerous position. He’s going to have a lengthy stint on the sideline. He’s not a dirty player, I’ve never seen that from him.” 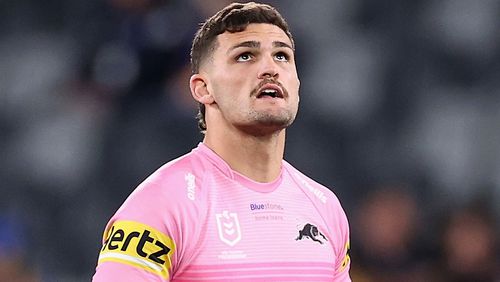 Gallen begs to differ and says it’s a bit of an over-reaction from Smith to send Cleary off.

“At the start of the season, I’d look at that and I’d say, ‘That’s not a send-off’. I think the referee at that point in time had no option but to send him from the field.

“I think after the Karl Lawton one, he got sent, I didn’t think he deserved a send-off at the time, but I think the precedent has now been set that if you get a player in a position like that, then you’re going to be sent from the field.”