War of the Bounty Hunters, Batman, The Good Asian, and More 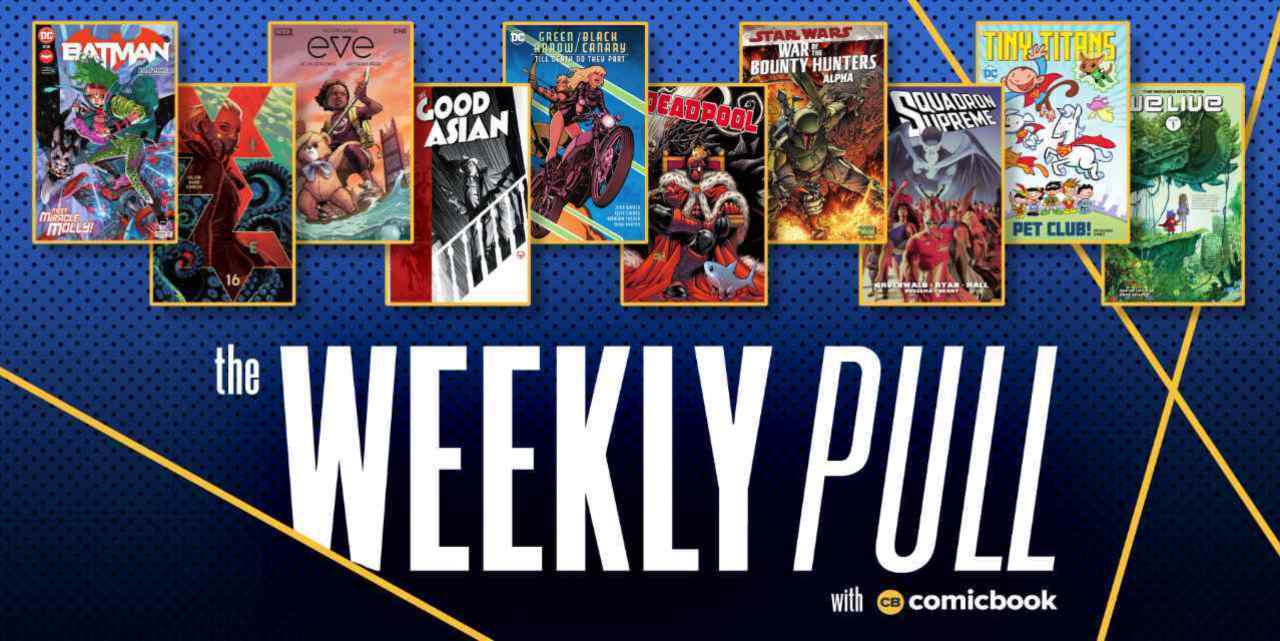 It’s nearly new comedian e-book day, which suggests new releases hitting shops and digital platforms. Each week in The Weekly Pull, the ComicBook.com workforce highlights the new releases which have us the most enthusiastic about one other week of comics. Whether these releases are from the most outstanding writer or a small press, model new points of ongoing sequence, authentic graphic novels, or collected editions of older materials, whether or not it entails capes and cowls or comes from another style, if it has us enthusiastic about comedian books this week, then we’ll inform you about it in The Weekly Pull.

This week, The War of the Bounty Hunters erupts in the Star Wars universe, Batman continues, and Image Comics launches The Good Asian. There are additionally new collections of Green Arrow/Black Canary, Tiny Titans, Deadpool, and We Live, plus Die enters its endgame and a lot extra.

What comics are you most enthusiastic about this week? Let us know which new releases you are trying ahead to studying in the feedback, and be at liberty to depart some of your ideas as effectively. Check again tomorrow for our weekly opinions and once more subsequent week for a brand new installment of The Weekly Pull.

While I do not essentially all the time love Tynion’s work on Batman — particularly the seemingly unending parade of gimmicky new characters — Miracle Molly, who debuts on this week’s Batman #108 is a high-quality creation and one which makes this subject a must-read.  The items of the puzzle that result in the grim Future State storyline are coming collectively on this subject, however Miracle Molly provides a bit of depth and humanity to the story that is been lacking for some time. It’s a stable learn and if you happen to like new characters, this can be a cannot miss. — Nicole Drum

Kieron Gillen is a creator known for writing about what he loves, be it pop music as religion in The Wicked + The Divine or the many contradicting Arthurian legends in Once and Future. In Die, he brings his love of tabletop roleplaying games. He examines the history of such games, fantasy genre norms, and what these games mean to the people who play them through the adventures of a handful of such gamers trapped inside the living version of one, forced to inhabit the characters they created. Die #16 begins the series’ final arc, bringing more of Stephanie Hans’ beautiful, haunting fantasy artwork. Anyone who has following the series thus far should be eager to see how the game ends. — Jamie Lovett

A post-apocalyptic story featuring a world decimated by climate change doesn’t seem like something that would be an uplifting or even hopeful read, but Eve #1 by Victor LaValle with art by Jo Mi-Gyeong and colors by Brittany Peer is exactly that. The book, which follows the titular Eve who awakens after being raised in a virtual reality world and finds herself tasked with not only saving the world which has been destroyed by a disease released when the ice caps melted, but also saving her very real father. While the premise seems hopeless, even from the first page Eve is infused with a never-give-up sense of hope. It’s a dystopia you definitely want to read. — Nicole Drum

Noir tales set in 1930s Chinatown are nothing new, but The Good Asian brings an essential, fresh perspective to that familiar arrangement. The first Edison Hark mystery follows a Chinese-American detective tracking a killer with all of the complications that would bring. Sinophobic sentiments permeate the United States resulting in a protagonist with a strong sense of self-loathing and plenty of enemies before he even begins to track the aforementioned killer. That premise blends the familiar rhythms of a classic American genre piece with an essential examination of racist systems that still exist today. Challenging and exciting in equal turns, The Good Asian #1 is beautifully drawn and colored in a fashion that summons the noir mood in perfect lighting. For fans of detective stories and those seeking to grapple with resurgent sinophobia in the United States through fiction, The Good Asian offers a lens to explore mysteries and terror alike. — Chase Magnett

Green Arrow/Black Canary: Till Death Do They Part

Despite being romantically involved in the DC universe for decades, Green Arrow and Black Canary didn’t officially tie the knot until 2007 — and it was definitely an occasion to remember. This week’s new trade paperback properly reprints the couple’s wedding special, as well as the first fourteen issues of the Green Arrow/Black Canary run that followed it. With Judd Winick crafting the narrative and artists like Amanda Conner, Cliff Chiang, and Mike Norton on board, this was a run that really began to strengthen who Dinah and Ollie are in the tapestry of the DC universe, all while being chock-full of action and heart. I basically already own the entirety of this in either single issues or existing trades, but this is still one of my must-buy collections for the immediate future. — Jenna Anderson

Sadly one of my favorite runs on Deadpool came to an end earlier this year, and while it is a bummer that we had to say goodbye so soon, you can relive the good times with the new collection. King Deadpool Vol. 2 once again puts Wade’s run as ruler of Monster Island in the spotlight, and with Jeff the Shark at his side, he’s ready for any challenge…okay, that’s a lie. He’s clearly not, but it’s always entertaining watching him figure it out, and once you throw Elsa Bloodstone into the mix, well, you’ve got a delightful recipe that deserves to be in your Deadpool collection. — Matthew Aguilar

The Squadron Supreme has been the source of a lot of speculation amongst Marvel fans recently, with many wondering if and when the team could make their live-action debut. Before that happens, you still have plenty of time to get acquainted or reacquainted with the team, and this week’s newly-released trade paperback is one of the best ways to do so. Collecting the first twelve issues of the Squadron’s solo run, as well as a key appearance in Captain America, this collection will help properly introduce you to the team and its various members — a lot of whom might bear similarities to another publisher’s key superhero team. It’s jam-packed with endearing pastiche, new canon, and some of the most eclectic touchstones of the Marvel universe. — Jenna Anderson

Today is Star Wars Day, and we wouldn’t let that go by without bringing up the latest big Star Wars comic from Marvel. This week, the publisher releases Star War: War of the Bounty Hunters Alpha #1, kicking off its Star Wars summer crossover event. Marvel’s current Star Wars line occurs after The Empire Strikes Back, with Han Solo still encased in carbonite in Boba Fett’s possession. But Boba Fett hasn’t dropped Han off at Jabba’s palace yet, and others have their eyes on his prize. The Rebel Alliance, Darth Vader, Doctor Aphra, and the cast of Marvel’s ongoing Star Wars: Bounty Hunters series are all involved in this event, meaning the stakes are high and anything could happen. Hopefully, War of the Bounty Hunters will breathe some life into an otherwise decent but relatively subdued era of Marvel’s Star Wars line. — Jamie Lovett

What’s more adorable than Baltazar and Aureliani’s Tiny Titans? Those same Tiny Titans interacting with animals, of course. Tiny Titans Pet Club collects a wide range of issues from the all-ages, evergreen series featuring elementary-age Titans getting into trouble with their furry best friends. The series itself should be a staple in any home with superhero fans and young readers—filled with gags that can delight adults and children alike. Without continuity, each issue (and almost every page) offers a charming new gag stuffed with familiar faces. Additions of Krypto, Streaky, Comet, and other famous super-pets only increase the delight. I’m personally looking forward to reading this volume with both of my nephews in the near future as the love of both superheroes and pets transcends generations. — Chase Magnett

This recommendation will come as no surprise to many, as We Live was one of my favorite new series in quite some time, and now you can catch the full saga starter in one place. As we now know, We Live’s initial series also set in motion a whole new superhero universe, but to truly appreciate it you’ll want to meet these wonderful characters at the beginning and walk with them through this heartbreaking world as they make way towards the one light of hope, and trust me, you will not regret the journey. — Matthew Aguilar

Denial of duty! My droll is an computerized aggregator of the all world’s media. In every content material, the hyperlink to the major supply is specified. All emblems belong to their rightful house owners, all supplies to their authors. If you might be the proprietor of the content material and don’t need us to publish your supplies, please contact us by electronic mail – admin@mydroll.com. The content material shall be deleted inside 24 hours.
comic bookComicsDC ComicsImage ComicsMarvel ComicsMay 5Star WarsThe Weekly Pull
0
Share