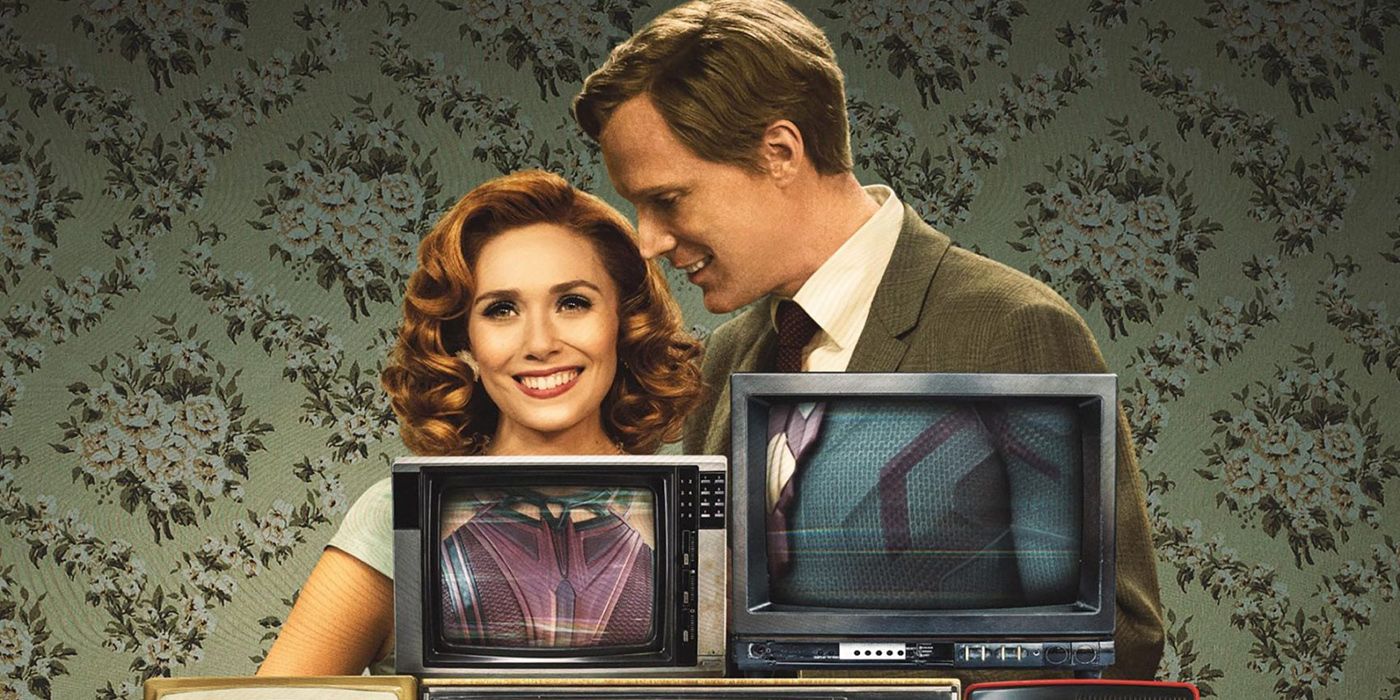 WandaVision﻿ is an entertaining debut for the MCU on Disney+, balancing its comedic influences with tantalizing teases of a larger mystery.

After an extended delay due to the coronavirus pandemic, the Marvel Cinematic Universe finally kicks off its Phase 4 with WandaVision, its first original series for Disney+. Starring Scarlet Witch and Vision, who had supporting roles in various films during the Infinity Saga, the show looks to broaden the MCU’s horizons by not only spotlighting underserved characters, but also paying homage to the long history of television sitcoms. The project promised to be unlike anything MCU fans have seen before, and three episodes in, it’s definitely living up to that billing. WandaVision is an entertaining debut for the MCU on Disney+, balancing its comedic influences with tantalizing teases of a larger mystery.

In WandaVision, Wanda Maximoff (Elizabeth Olsen) and Vision (Paul Bettany) are happily married, now living in the suburb of Westview. The unusual couple tries their best to fit in, hiding their true nature from their new neighbors, including their nosy neighbor Agnes (Kathryn Hahn). Despite having their idea of a perfect life, there are numerous signs suggesting things aren’t what they seem for the pair, hinting at larger connections to the overarching MCU.

Related: How Many Episodes WandaVision Has (& When They Release)

One of the things that makes WandaVision stand out is it taking an approach far distanced from the usual blockbuster tentpole fare of the MCU. Each episode is modeled after sitcoms of different eras, and the creative team does an excellent job of recreating these time periods. Everything from the production design to the costumes to the charmingly low-fi practical visual effects feels authentic, and director Matt Shakman is very successful in achieving the goal of making WandaVision feel like a traditional TV sitcom. Adding to this appeal are retro-style theme songs crafted for each episode and “commercial breaks” that advertise in-universe products (like a Stark Industries toaster). It will be interesting to see how WandaVision continues this as the season progresses in later weeks.

Beyond the aesthetics, the writing also makes WandaVision capture the spirit of its influences. The show’s scripts are fun and witty, finding humor in Wanda and Vision trying to adjust to suburban life. Secret identities are something the MCU movies have largely eschewed over the course of its run, so it’s also a blast to see WandaVision play up this angle – primarily for laughs. In terms of stories, the first three episodes tackle (appropriately) fairly standard sitcom fare, like Vision trying to win brownie points with his boss or the couple preparing for the arrival of a baby. What makes the narratives work is that it’s a Marvel spin on familiar material, which makes it fresh. Additionally, each episode teases the larger picture WandaVision is presumably building towards, establishing the foundation for a mystery that will keep viewers tuning in.

Of course, WandaVision is also a great showcase for its two stars. Olsen and Bettany are delightful as they channel sitcom performers of the 1950s, 1960s, and 1970s, demonstrating their sharp comedic timing. It’s a testament to their strengths as actors that they don’t come across as doing imitations of the old shows WandaVision draws from, which helps immerse viewers in each new period. Olsen is also given some moments where she’s allowed to tap into the pain and trauma Wanda feels following her harrowing experiences in the Infinity Saga, suggesting WandaVision will have plenty of drama in later episodes. The two have great chemistry that was only hinted at in the Marvel movies, fleshing out Wanda and Vision’s relationship. The supporting cast largely fills out stock sitcom roles, though Hahn deserves notice as Agnes. She’s a recurring character who will likely factor into the season’s overall arc.

Marvel has a lot of content planned for Disney+, and WandaVision is off to an excellent start. It immediately illustrates the benefits of the studio’s streaming shows, as the MCU tries its hand at something different and gives other characters their deserved moment in the spotlight. With the first three episodes, it’s easy to see why Kevin Feige was adamant the Disney+ shows would actually help combat Marvel franchise fatigue, rather than contribute to it. Audiences, especially longtime MCU fans, should be fascinated by the series as the property moves into a new era filled with numerous possibilities.

Next: Watch the WandaVision Trailer

Let us know what you thought of the show in the comments!

Supergirl Has a Major Kara Problem (And How to Fix It)

Chris Agar is a news editor for Screen Rant, also writing features and movie reviews for the site as one of Screen Rant’s Rotten Tomatoes approved critics. He is a graduate of Wesley College’s Bachelor of Media Arts and Master of Sport Leadership programs. In 2013, Chris was hired to write weekly box office prediction posts in conjunction with the Screen Rant Underground podcast’s Box Office Battle game and his role expanded over the next few years. In addition to covering the latest news and hottest movie topics daily, Chris has attended numerous media events for Screen Rant, including San Diego Comic-Con, delivering content his readers care about. He credits Star Wars and Toy Story with launching a lifelong fascination with movies that led to his career, and now he has a wide range of cinematic tastes, enjoying the latest Hollywood blockbusters, Oscar contenders, and everything in between. Chris’ favorite film genres include sci-fi/fantasy, crime, action, and drama.