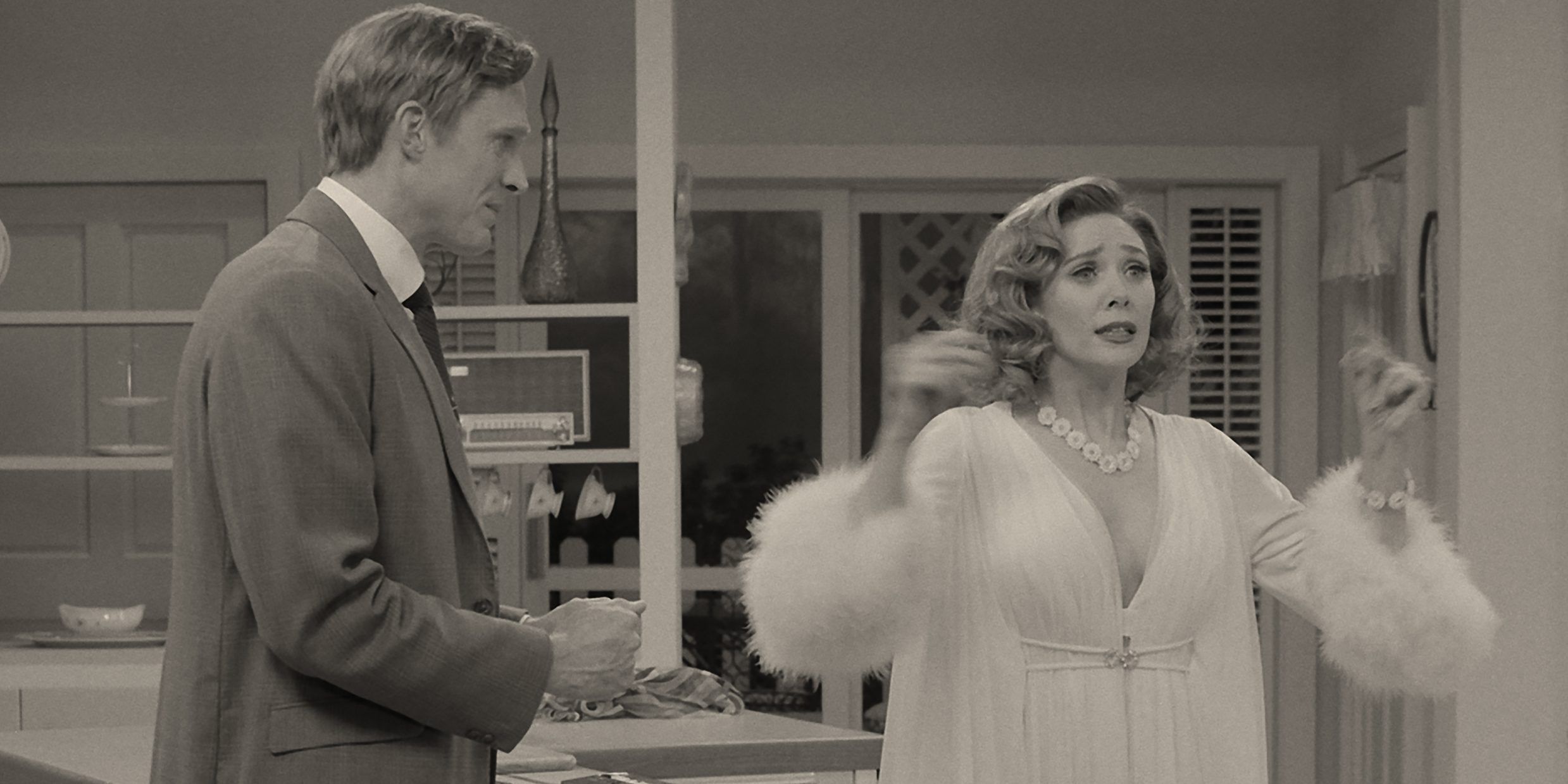 Ohhhhh a newlywed couple just moved to townA regular husband and wifeWho left the big cityTo find a quiet lifeWandaVision!She’s a magical gal in a small town localeHe’s a hubby who’s part machineHow will this duo fit in and fulfill all?By sharing a love like you’ve never seenWandaVision!

Those are the lyrics for WandaVision‘s opening theme song… at least, this first version. The premiere of the MCU’s most bold creative experiment yet very deliberately aims to reveal nothing at first — except for the fact that while we might seem to be watching a black-and-white sitcom about happy young couple Wanda (Elizabeth Olsen) and Vision (Paul Bettany), there’s a lot more going on here.

The fact that Episode 1 commits immediately and thoroughly to the tropes of classic ’50s sitcoms like I Love Lucy and Bewitched, anchored on a simple misunderstanding: It’s Wednesday, August 23, and the kitchen calendar is marked with a heart. While neither Wanda or Vision can exactly remember why that might be, both of them are hesitant to admit it to the other, and he leaves for work with the mystery unresolved and his face shifted into a human disguise.

With Vision off at the office, Wanda meets her next-door neighbor Agnes (Kathryn Hahn) and explains the mystery of the day’s date — Agnes suggests that it might be their anniversary, and volunteers to help her plan a special romantic night for Vision. It’s a bit tricky because Wanda doesn’t know their special song, or any real details about their relationship. But they do come together with a plan.

Unfortunately, at the office, Vision discovers that the heart symbol actually was a reference to his boss Mr. Hart (Fred Melamed), because as the new guy he’s obligated to throw a dinner party that night for both Mr. Hart and his wife (Debra Jo Rupp). After calling Wanda to make sure she “remembered,” Vision stays focused on a question he can’t answer: What is it he does at work, exactly? Beyond computations, that is, which his coworker Norm (Asif Ali) notes he does like “a human computer.” Vision objects: “I’m a regular carbon-based employee made entirely of organic matter, much like yourself!”

When Vision and the Harts walk into the living room, staged for the 1950s version of seduction, it’s a moment so perfectly drawn from the sitcom tradition of conflict driven by misunderstandings that I remembered watching shows like this when I was very very young, and running out of the room anytime a show leaned hard into this sort of awkwardness.

Despite the goof-up, Wanda and Vision do their best to improvise a somewhat magical evening happen for the Harts, with some major help from Agnes (who just so happens to have the ingredients for an entire gourmet dinner on hand). Key to this is Vision being quick on his feet with some musical interludes, specifically hot tracks like “Yakety Yak” and “Old MacDonald.”

When the gourmet dishes proposed by Agnes don’t work out thanks to Wanda’s powers going awry, Wanda instead pivots to breakfast-for-dinner — but once they actually sit down to eat, the conversation gets tense because Wanda and Vision simply can’t answer any basic questions about their past. And then we shift from I Love Lucy to The Twilight Zone for a few moments, the intensity rising to the point where Mr. Hart begins to choke, collapsing to the ground and only surviving after Vision uses his phasing powers to clear his throat.

Things snap back to “normal” at that point, and the Harts take their leave. Wanda and Vision, cuddling on the couch together, decide to make “Yakety Yak” their official song, Wanda magicks up some wedding rings for them, and as Vision declares, “they lived happily ever after.” As when the credits roll, though, the camera pulls back… revealing that they’re being watched by someone (or likely many someones, given the helicopters heard elsewhere).

Anyway, I was looking up what specific year in the 1950s would August 23 have fallen on a Wednesday, and the answer is that it only happened once, in 1950. Because 1956 was a leap year, August 23 skipped from Tuesday the year before to Thursday; do I think this means Episode 1 takes place in the year 1950? Nope — to me, it’s far more interesting to think that this is Wednesday, August 23, 1956. A day that never existed, in a world that’s not real.

And Now For These Messages

New episodes of WandaVision stream Fridays on Disney+. Here’s our recap of Episode 2.

It’ll be a ‘Gentlemen’ reunion for Grant, as well as Hartnett’s most notable movie in more than a decade.