Wall Street economists split on whether Fed cuts rates in 2023 Wall Street’s biggest banks agree the Federal Reserve will hike US interest rates further into next year, but are at odds over how high it will take them and whether it will be cutting by the end of 2023.

In a reflection of how tough Chair Jerome Powell’s job is becoming, leading economists are split over whether the central bank will need to keep attacking stubbornly high inflation or if the risks of recession and rising unemployment will become bigger concerns.

While there is a broad consensus in predicting the Fed will raise its benchmark rate by 50 basis points to a range of 4.25% to 4.5% in December and then to around 5% by March, that is where agreement over the outlook ends:

“Chair Powell has been pretty clear in his communications that the committee has learned one key lesson of the ’70s, which is not to loosen rates prematurely even in the midst of a recession. The most compelling reason for Fed to cut rates in 2023 is if inflation falls below 3%. That’s not our modal forecast. Indeed our inflation forecast sees 68% chance of inflation between 3% and -5% next year.”

“Given the uncertainties at play it is understandable that the range of forecasts is so wide,” said Jonathan Millar, a senior economist at Barclays in New York.

Although Powell and his colleagues now sound resolute in signaling they will maintain tight monetary policy to return inflation to their 2% target, from 6.2% in September and 7% in June, Millar said he does “not view that intention as credible in our baseline scenario where inflation comes down rapidly and the economy goes into recession.”

In markets, the Fed is seen raising rates by a half point in December, in line with the economists’ view, with rates peaking near 5% by March with half a percentage point of cuts priced in by December 2023.

Nomura sees the loftiest peak, anticipating the need to fight inflation will force the benchmark in May to 5.75%, which would be the highest since 2001.

UBS is looking for the sharpest policy pivot as it bets on the economy suffering a “hard landing” with unemployment rising to above 5% in 2024.

Its economists note that historically the Fed has changed tack quite quickly once outright job losses are recorded, with the median gap between rates peaking and being cut sitting at just 4.5 months.

In 1984, for example, Chair Paul Volcker’s Fed U-turned in six weeks, going from rapid tightening to over 500 basis points of rate cuts. In 1989, Chair Alan Greenspan kept the federal funds rate at its high for just three weeks, before starting a reduction cycle of almost 700 basis points, while he waited 23 weeks to ease in 1995. 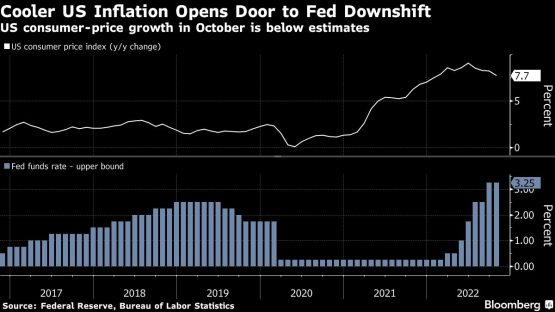 Much depends on the labor market creaking. Bank of America Corp. analysts say that in the past 16 rate hiking cycles since 1954, average unemployment when the Fed hiked for the last time was 5.7%. It was 3.7% in October.

Deutsche Bank, one of the first to predict a recession, is also looking for a switch in the face of a contraction in which unemployment hits 5.5% and inflation falls to a little over 3%.

Of course, forecasting is dicey work. As recently as January, most economists thought the Fed would be much less aggressive than it has been, according to a survey.

Some Fed watchers are now persuaded the Fed’s hawkishness will persist alongside inflation, though partly because they bet the economy may hold up surprisingly well despite the central banks constraint.

Goldman Sachs economists led by Jan Hatzius said this week that they now reckon the Fed will lift its benchmark to 5.25% and stay there through the end of next year. Wells Fargo has the same outlook.

“Too much easing too soon could interfere with the Fed’s efforts to keep growth below potential until inflation is clearly on its way back to target,” the Goldman Sachs economists said.

They previously said they see a “very plausible” path for the economy to avoid a recession, which also means inflation could be stickier than the Fed wants. They see a 35% chance of a recession in 2023 compared to the 65% probability assigned by the consensus of economists surveyed by Bloomberg. Morgan Stanley is expecting the Fed to only start easing in December by a quarter point after a year in which the economy just misses a recession.

“Still-high inflation keeps the Fed on hold for an extended period,” economists led by Ellen Zentner said in report this week.

Having been wrong-footed by the inflation surge, Fed leaders began hiking rates from near zero in March and moved by 75 basis points at their last four meetings, delivering the most aggressive restriction of policy since the 1980s.

They now consistently say they see stable prices as a precondition to protecting the labor market in the future even if that means job losses and weaker growth in the short-run.

“The record shows that if you postpone that, the delay is only likely to lead to more pain,” Powell said Sept. 21.

Analysts at Piper Sandler & Co. this week told clients the Fed would need to see a majority of five developments before it could pivot:

“This cycle started in March of this year — only eight months ago,” Piper Sandler’s Roberto Perli and Benson Durham said in a report. “Most likely, it won’t be much sooner than March 2023 that the Fed can have a good idea of whether the recent tightening has been enough to curb inflation.”

With Iger's return, some Disney fans want the park…