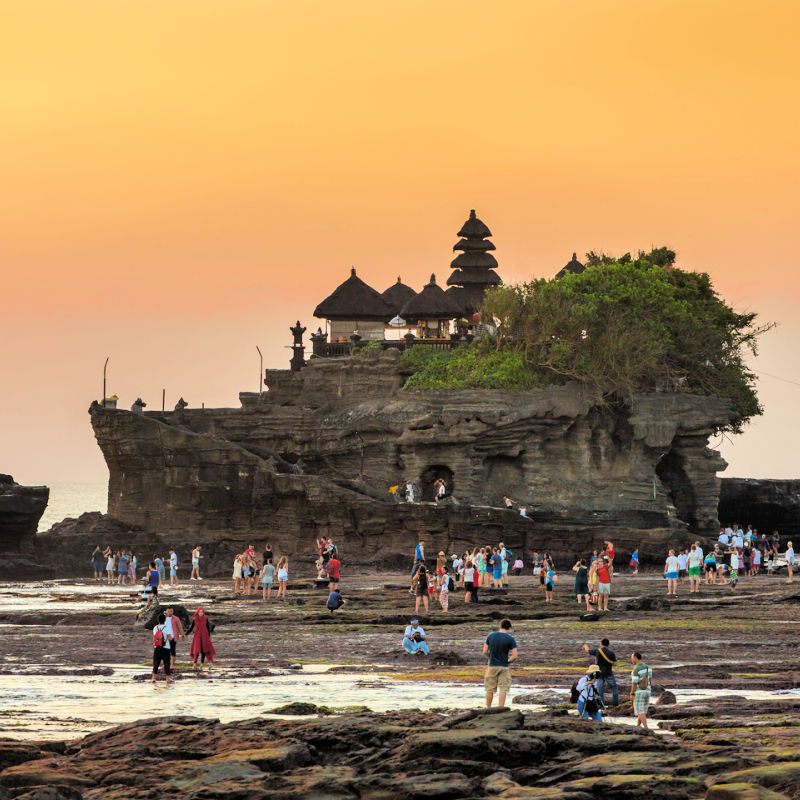 Bali’s world-famous Tanah Lot Temple is welcoming back tourists en mass. The Bali temple’s tourism operations leaders have told reporters that visitor numbers have nearly doubled since last year. The news is a comforting sign for the surrounding community that the recovery from the pandemic continues in the right direction.

The Head of the Tanah Lot DTW Promotion and Development Division, Ni Made Suarniti, told local reporters that ‘the data for visits in the first semester of 2021 were only 274,037 people, while the data for the first semester of 2022 reached 475,257 people, and continued to experience growth’. He sited that the reopening of direct flights from Taiwan to Bali on the 2nd of September had created a noticeable increase in numbers in just a week.

China Airlines has resumed a twice-weekly service from Taipei to Denpasar. The service operates every Tuesday and Friday. It is hoped that flights from China will resume in due course, which would have an even more significant impact on the tourism economy.

During a recent visit to Governor Koster’s offices, China’s Ambassador to ASEAN Nations, HE Deng Xijun, expressed his approval of Bali’s handling of the pandemic. He shared his hopes that direct flight services and tourism from China would resume in Bali soon.

Sunarniti continued to share his experience of the increased visitor numbers to Tanah Lot Temple. He said the balance of visitors had been nearly 50-50 in terms of domestic and international tourists. He noted, ‘Since last August, foreign and domestic visits have been balanced, [but] previously domestic ones dominated’.

Sunarniti and his teams have been scrutinizing visitor data to help inform their future management choices. He was able to share that there have been at least 10 visitors from each of the G20 nations. He said there have been dozens of tourists from India, Japan, and Korea.

In the year to date, Tanah Lot Temple has welcomed 726,142 people. Sunarniti told the press his ambitious targets for the rest of the year. His vision is undoubtedly optimistic but not unrealistic when potential visitors from the G20 Summit are taken into consideration.

He said, ‘This year, Tanah Lot targets visits at 1.7 million tourists’. Whether Sunarniti can welcome a further million people to Tanah Lot remains to be seen. While Bali is on track to its targets of 1.5 million international visitors and 6 million domestic visitors by the end of the year, the target feels steep.

Tanah Lot Temple is perhaps the most photographed temple in Bali. Closely followed by Uluwatu Temple, Ulun Batu Beratan Temple, Besakin Temple and Goa Gajah. Tanah Lot Temple can be found on a rocky outcrop surrounded by the ocean. Known formally as Pura Tanah Lot, the temple’s name translates to Temple Of Earth and Sea. The temple is dedicated to the god of the sea and is one of Bali’s most sacred sites.

Hundreds of thousands of tourists visit Tanah Lot Temple every year. The site is open from 7 am until 7 pm daily. Many people visit around sunrise or sunset for the most spectacular views.

Mass tourism has undoubtedly returned to Bali, most noticeably in key areas like Legian, Kuta, Seminyak, and Canggu. Areas like Nusa Penida are also welcoming back tourists in their thousands. Though it would be too bold to say that the island has entirely recovered from the pandemic. Many areas in North Bali have begun to welcomed back tourists but are not yet hitting pre-pandemic figures.

Minister for Tourism and Creative Economies has launched a promotional campaign to help drive tourism further north and west of Bali. The statistics speak for themselves; however, mass tourism is back, but whether the distribution is fair, as ever, remains up for debate.

Magna gets into electric mopeds and battery swapping

Do These Dividend Achievers Deserve A Place In Your Portfolio?

Rex Tillerson, on witness stand, gives rare insight into his…

‘The Rings of Power’ Offers Exciting Update On…

Shooting that left 2 Berkeley High students dead was at an…