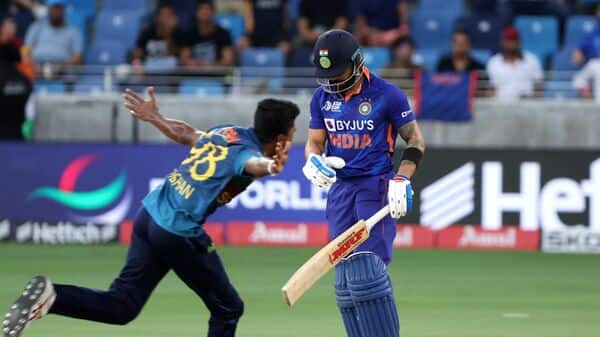 Sri Lanka beat Pakistan by 23 runs in Dubai on Sunday to clinch their sixth Asia Cup. Pundits had given Sri Lanka little chance of making the Super Four after an embarrassingly opening defeat against Afghanistan. But Dasun Shanaka’s side then raked up five successive wins took them to Asia Cup glory. Batsman Bhanuka Rajapaksa’s batting masterclass and Wanindu Hasaranga’s all-round brilliance secured Sri Lanka’s 23-run victory against Pakistan in the final.

Bhanuka Rajapaksa labelled the achievement as a “great win” for the island nation amid their economic crisis. “As a nation, I think it’s a great win … with all the crisis happening back home, these are tough times for Sri Lankans. We are glad and hope that we brought some smiles to their faces,” he said.

Sri Lanka captain Dasun Shanaka said winning the Asia Cup will help the team’s preparation for next month’s Twenty20 World Cup. Sri Lanka are due to begin their World Cup campaign with a qualifying match against Namibia on October 16. The island nation had won the T20 World Cup in 2014.

Mahindra Group chairman Anand Mahindra took to Twitter to share his views on Sri Lanka winning the Asia Cup in Dubai for the sixth time. “I am thrilled at Sri Lanka’s victory this evening. Not because I wanted Pakistan to lose. But because Sri Lanka’s victory reminds us that Team Sports are not about celebrities & superstars but about—yes—Teamwork!” he said.

King Kohli is back

Even though India could not qualify for the finals, Virat Kohli scored 276 tournament runs at an average of 92, with his 122 not out against Afghanistan becoming his first century for India in any format since November 2019. It was also his first three-figure score in a Twenty20 international. Kohli’s extended batting slump had become a major talking point but he silenced the chatter. Kohil was the second highest scorer of the tournament, only surpassed by Pakistan’s Mohammad Rizwan, whose 55 in the final nudged him in front with 281 runs from six matches.

Pakistan’s bowling attack was without the injured pace spearhead Shaheen Shah Afridi but another Shah, teenager Naseem, rose to the occasion. The 19-year-old’s express pace saw him take seven wickets in five matches and he was also a match-winner with the bat — his two last-over sixes in the thrilling win over Afghanistan took his team into the final. Shah signed off the Asia Cup in typical fashion by taking a wicket in the first over in Sunday’s final, spectacularly uprooting Kusal Mendis’s off stump after Pakistan captain Babar Azam had won the toss and opted to bowl.

Afghanistan captain Mohammad Nabi predicted they will “come back stronger” for the T20 World Cup where his side will be looking to upset the established cricket powers. In the opening match, his side bundling out eventual champions Sri Lanka for 105 in the opening match, which Afghanistan won by eight wickets with nearly 10 overs to spare. Afghanistan then hammered Bangladesh and in the Super Four gave Pakistan a mighty scare before going down by one wicket in the final over of an ill-tempered clash. Most of the team learnt their cricket in refugee camps in Pakistan and they have made giant strides since getting Test status in 2017.

All-rounder Shakib Al Hasan returned as captain after he bowed to a Bangladesh Cricket Board ultimatum to scrap a deal with a betting site. But his presence made little difference to Bangladesh’s woeful T20 record as they failed to make it to the Super Four after losing group matches to Afghanistan and Sri Lanka. Shakib returned figures of 1-13 with his left-arm spin against Afghanistan and then made 24 in the Sri Lanka defeat, Bangladesh’s 15th T20 loss in their last matches, but insisted his team had a “plan in place” to improve. (With Agency Inputs)

Denial of responsibility! My droll is an automatic aggregator of the all world’s media. In each content, the hyperlink to the primary source is specified. All trademarks belong to their rightful owners, all materials to their authors. If you are the owner of the content and do not want us to publish your materials, please contact us by email – [email protected]. The content will be deleted within 24 hours.
Asia cupSri LankaVirat Kohli
0
Share

Samsung announces that it will soon compete with Apple in…

Almost half of young people with long COVID report lost…