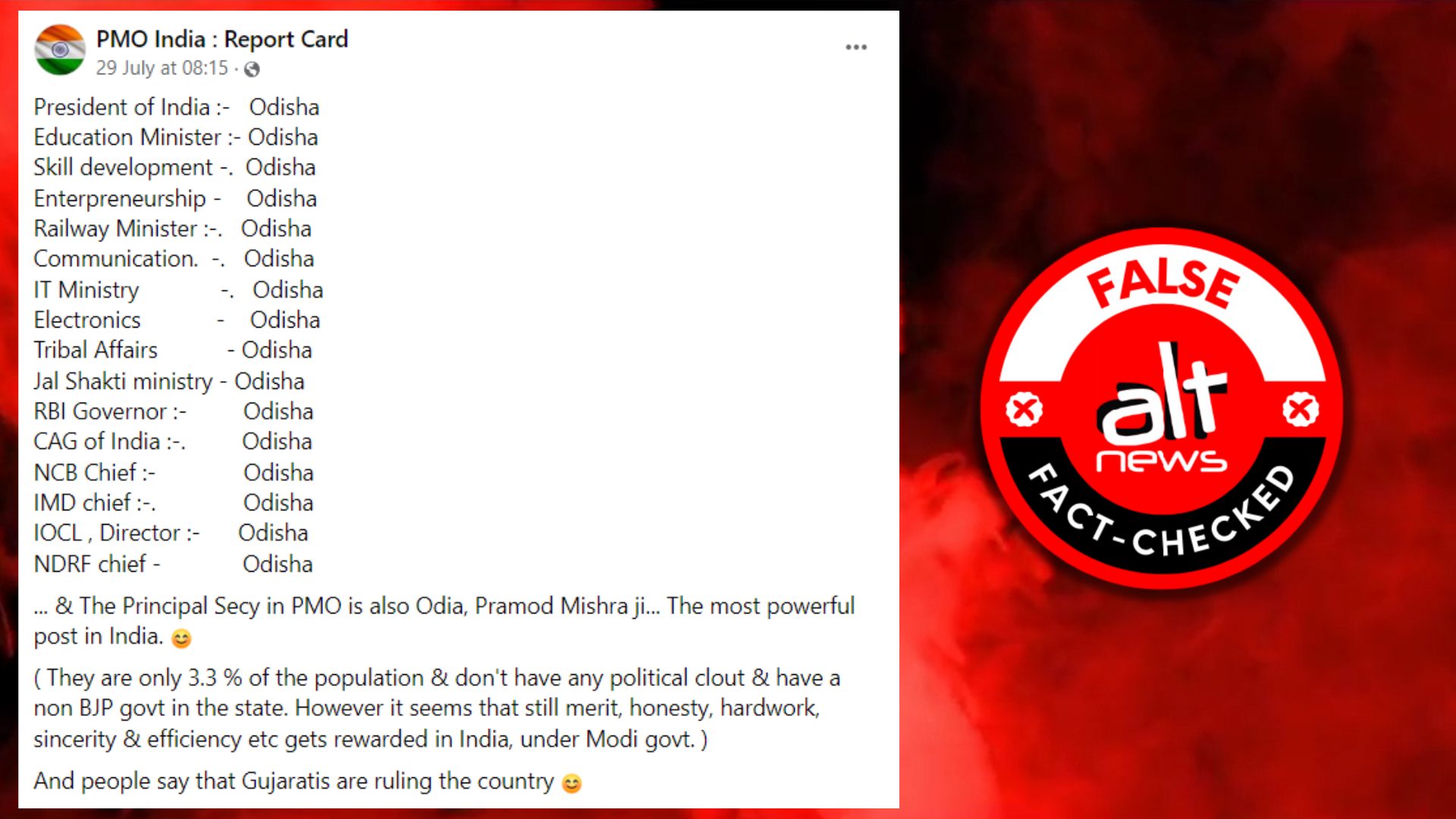 A text message widely shared on social media claims that seventeen influential positions in the Government of India (GOI) are held by persons from Odisha.

According to the viral message, these posts include the President of India and union ministers of the following departments — Education, Skill development, Entrepreneurship, Railway Minister, Communication, IT Ministry, Electronics, Tribal Affairs, and Jal Shakti. The text also states that the Reserve Bank of India (RBI) governor, the Comptroller and Auditor General (CAG) of India, the Narcotics Control Bureau (NCB) chief, the India Meteorological Department (IMD) chief, the director at Indian Oil Corporation, (IOC) and the National Disaster Response Force (NDRF) chief are also from Odisha. The text ends by pointing out that the Principal Secretary to the Prime Minister, Pramod Mishra, too, is an Odia. This is the only instance where the name of the office bearer is mentioned.

The message ends by pointing out, “They are only 3.3 % of the population & don’t have any political clout & have a non BJP govt in the state. However it seems that still merit, honesty, hard work, sincerity & efficiency etc gets rewarded in India, under Modi govt. And people say that Gujaratis are ruling the country[sic]”

Facebook page ‘PMO India: Report Card’ shared the message. It has garnered over 21,000 likes. Several pro-BJP Facebook accounts have made the same claim. On WhatsApp, the message is labelled ‘forwarded many times’.

The readers should note that the viral message doesn’t specify exactly in what sense these people are considered from Odisha — i.e. whether they are born in the eastern state or have their permanent address there. In order to verify the claims, we relied on the permanent address listed on the Government of India (GOI) website. In case the address is not listed, we relied on media reports.

The first position mentioned in the viral text is the President of India. It is held by Droupadi Murmu and she is indeed from Odisha. This is a fact that has been widely documented in media reports.

In order to verify which state the respective union ministers belong to, Alt News relied on information available on the website of the National Portal of India (NPI).

The first three positions on the list of ministers are “Education, Skill Development, and Entrepreneurship”. We found that Dharmendra Pradhan is the minister in charge of the Ministry of Education and the Ministry of Skill Development and Entrepreneurship. The readers should note that the viral message seems to suggest that skill development and entrepreneurship are two separate ministries, which is not the case. As per NPI, Pradhan represents Madhya Pradesh. However, his permanent residence is in Odisha. Thus, the claim is true.

The next references in the viral text are to the Ministry of Tribal Affairs and the Jal Shakti Ministry. the first is headed by Jharkhand-based Arjun Munda. As per his Twitter bio, he is the former Chief Minister of Jharkhand. His permanent address is also in Jharkhand. The second is headed by Rajasthan-based Gajendra Singh Shekhawat. So, in these two instances, the claims made by the viral message are false.

The message mentions “RBI Governor, CAG of India, NCB Chief, and IMD Chief” as hailing from Odisha. As per the Reserve Bank of India‘s official website, Shaktikanta Das is the current governor. The Indian Express has reported that he is a native of Odisha. Girish Chandra Murmu is the present Comptroller and Auditor General of India (CAG). He, too, is a native of Odisha.

The viral message then refers to the “IOCL Director”. The official website of Indian Oil Corporation Ltd lists seven directors, among which there are four ‘Whole-time directors’, two ‘Government Nominee directors’, and one ‘Independent director’. Thus, the claim made by the message that an Odisha-based person is heading IOCL is misleading. The highest position at IOCL is that of the chairman, which is held by Govind Kottieth Satish. An IOCL official told Alt News over the phone, “The present IOCL chairman Mr Satish is not from Odisha.”

The present NDRF Director-General is Atul Karwal who belongs to the Gujarat Cadre. Alt News had a conversation with the NDRF media operator, Deepak Bamoriya. He said, “The former chief was from Odisha. However, the present chief is not.”

To sum it up, out of the seventeen Government of India office bearers listed in the WhatsApp message, eleven are people who hail from Odisha or have permanent addresses in the state. The claim that all of them hail from Odisha is false.

“Get more players in”, “Can he play striker?”