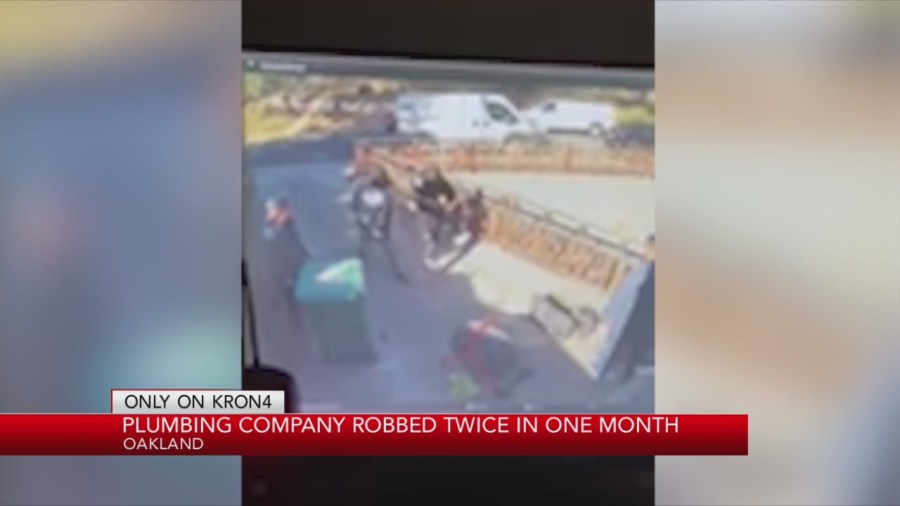 OAKLAND, Calif. (KRON) — An Oakland business owner is out thousands of dollars in equipment after his technicians got robbed twice in less than a month.

One of the robberies was captured on camera. The owner said the people who work for him are like members of his family so to see this last robbery caught on film is very upsetting to him.

“For me it’s very disturbing and hurtful to see what occurs,” said Ygnacio Becerra, Oakland Rooter and Plumbing owner.

Becerra said in the last month his plumbing technicians have been robbed twice while trying to do their job. The second incident happened on Tuesday, and it was caught on their customers’ home security video.

“It’s pretty straightforward, my guys were targeted. The thieves circled the block a few times before they decided to make their move,” said Becerra.

In the video, the two suspects approach the technician and one of the suspects holds up his arm as if he has a gun.

“Three guys with a gun walked up to my technician and demanded that they release the camera equipment. They stated ‘We’re here to take your camera. Don’t worry about it, you don’t want to die, you don’t want to lose your life, just give us the camera and we’ll let you guys go,’” said Becerra.

At the end of the video, the suspects take everything and run away. Becerra said they use video equipment that costs about $20,000 to do inspections of sewer lines for people who are buying or selling a home.

He said a similar incident happened back on August 12. After both incidents he filed a report with the Oakland Police Department.

He does not believe his particular business is being targeted. He believes it is the neighborhoods that are attracting the criminals.

He said his goal is to make people aware these types of crimes are happening every day in the City of Oakland. Despite these recent robberies, Becerra said he is staying put.

“I’m very proud to be born and raised in Oakland. It was a big decision for me to name my business after Oakland. I’m here for the long run. I’m not going anywhere,” said Becerra.

He said that his technicians know that it is not worth losing their life over a piece of equipment and that they should let the suspects take it.