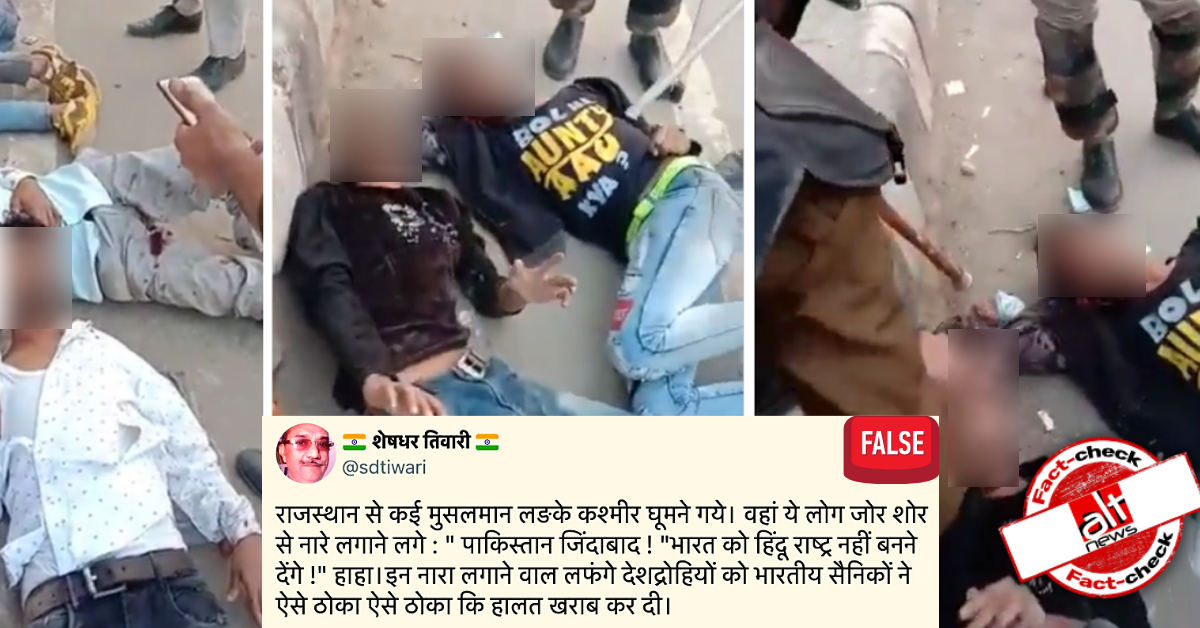 A video of five injured men being forced to sing the national anthem and ‘Vande Mataram’ by security personnel has been shared on social media with the claim that Muslim youth from Rajasthan visiting Kashmir were thrashed by Indian army men after they were found chanting “anti-India” slogans. (1, 2)

The video is not from Kashmir, but a clip that emerged after communal riots that took place in North-East Delhi in February 2020. Alt News had done verification of the video when it had come to light. Our report found that the incident took place near the Krishna Marg bus stop in Kardam Puri locality of Shahdara at around 5:45 PM on February 24, 2020.

It was later reported that one of the victims in the video was Faizan, 23, who succumbed to his injuries a few days after the video went viral.

According to a report by The Indian Express published in January 2022, the police identified and questioned a head constable in connection with Faizan’s death. It also mentions that the single-judge bench led by Justice Mukta Gupta criticised the force for the delay in the investigation. The next hearing in the case will be on February 22, 2022. The court has asked the police to present the detailed status report into the probe and also sought the presence of the deputy commissioner of police and the investigating officer.

As for the claim that Muslim youth from Rajasthan were thrashed by the military for “anti-India” slogans, we checked various news reports and performed several keyword searches but were unable to find reports supporting the claim.

A video of security personnel forcing five Muslim men to sing the national anthem and Vande Mataram’ during the 2020 Delhi riots has been shared with a false claim.

fpi selloff: After 8 months of relentless outflows, is FPI…