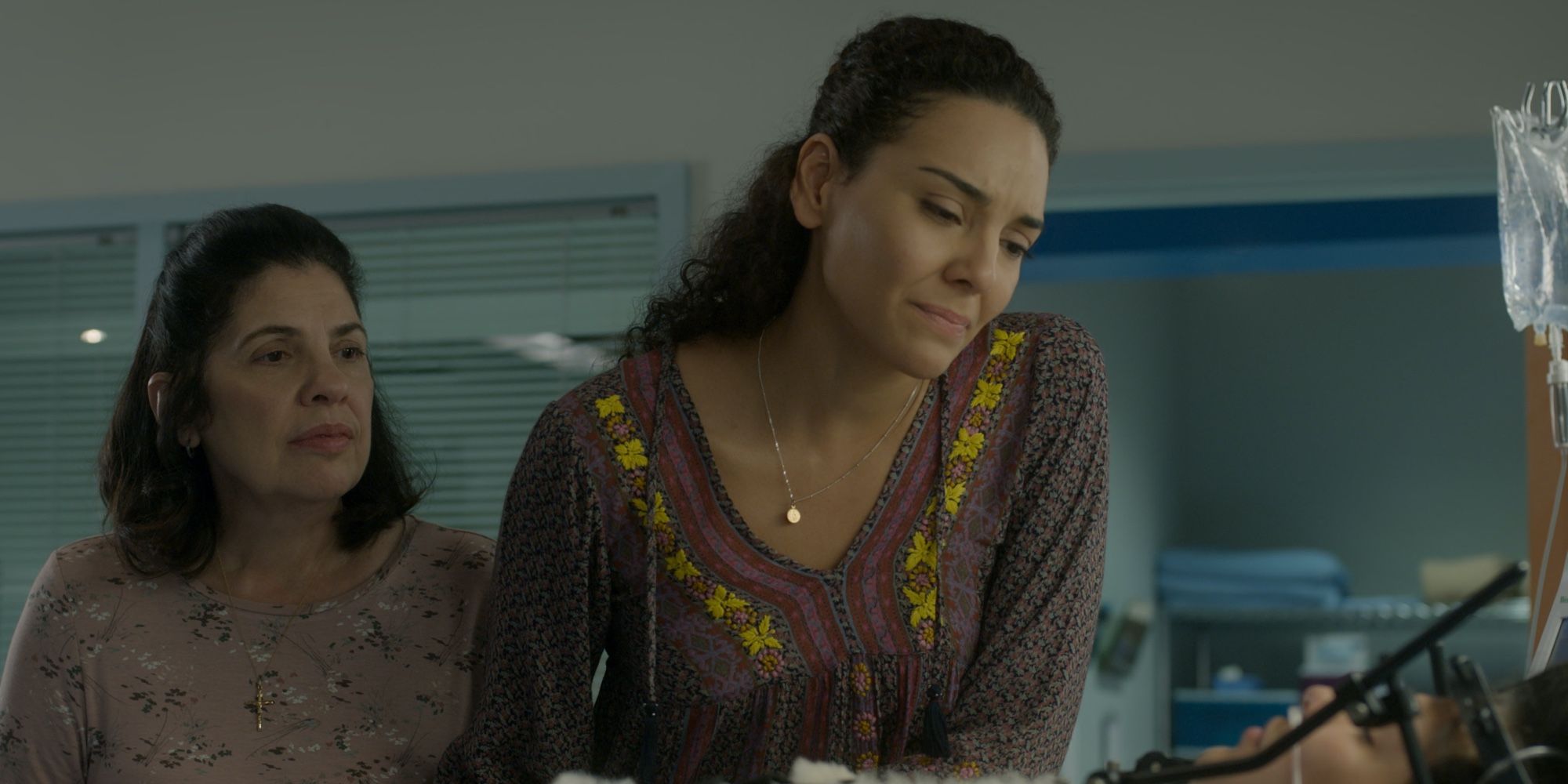 We interview Cobra Kai star Vanessa Rubio about the show’s continued success, her character’s evolution over the seasons, and much more.

Cobra Kai has built a huge fan base on YouTube Premium and an even bigger following as it made its move over to Netflix for the new season. One of the major draws to the series is the relationship the kids have with their parents.

Vanessa Rubio who plays Carmen Diaz, Miguel mom, brings a lot of heart to the series.  Being a fan of the original movies she is also very passionate to bring new fans and old together.

After the devastating news of Miguel’s injury. Carmen must not put her foot down to end the violence and help her son heal in hopes to have him walk again. Cobra Kai season 3 premiered on January 1st and all seasons are now streaming exclusively on Netflix.

Congratulations on the new season of Cobra Kai. It was really an amazing story and I can’t wait for season four. So just starting off since the launch the show back in 2018 fans have been raving and the fan base has been growing especially since it moved on Netflix. What about the show stands out to you and why is it so successful.

Vanessa Rubio: It’s been a wonderful journey to see it grow. I think like from YouTube to Netflix I think that the writers and producers really just do a great job as do the whole cast of just bringing the things that we loved about the Karate Kid the lessons that were presented there and growing them into you know the current time moving beyond the stereotype and seeing more as they say in the show the gray area you know no one character is good or bad they’re just kind of going to different circumstances at the moment and just watching these characters of all this is really nice. I think it’s really good that different generations can appreciate it and draw humor and relatability at the same time. So a lot of families are watching it which I love. So it’s this it kind of gets all the marks and a half hour so you don’t really feel like I get overly time for that.

Now you know the fan base is super huge. Have you been able to meet a lot of fans out either through conventions or events that you’ve done? And how’s how’s that experience been for you?

Vanessa Rubio: Fans are really nice. I mean I didn’t get  recognized on the street when it was out on YouTube. And then once it was moved to Netflix this past year  it was 2020 which was  a pandemic year. So I wasn’t really out there but a lot of people.

What was the most intriguing thing about the role of Carmen and have the writers been giving you a lot of freedom on what you wanted to do with her.

Vanessa Rubio: The most intriguing thing I think is for me is her strength and ways of providing. I think the admirable way you know dedicated her family and abundant. And she is very organized. You know half dignity and her with her family you know very providing the best that you can under the pretty difficult circumstances. The producers did give me some freedom. I mean the part that I’m. Looking at it realistically. She came to the US when she was 18 or 19 so I think she would have an accent. I decided on the accent and I did feel like that was good for me to decide on that and other than that I think they give a lot. They give me a lot of trust and freedom to shape her.

Now it is there. I know you work a lot with William and Xolo and his grandmother in the show. Is there any particular character that you’d want to have more scenes with in future seasons?

Vanessa Rubio: I mean I think I would love to have more interaction with Amanda Larusso. To get their moms together and like ” “What Is going on in the crazy Karate Valley Universe” That would be a lot of fun as well.

Maybe even better to have been in that dojo and when she got to slap John Kreese that would have been amazing.

Vanessa Rubio: Oh absolutely. She really. I think we were all pretty supportive of her when we saw that.

Seems like the cast has a lot of fun especially the martial arts aspect of the show. Do you personally get to partake in some of those classes that the kids do?

Vanessa Rubio: No I really don’t. Only martial arts that I prepped for what was the dream sequence which was far from martial arts I think. But I would love to do that more actually. I welcome the opportunity.

Vanessa Rubio: It even surprises her being attracted to him in the beginning in Season 1 she called him a loser. I think you’re surprised by his sensitivity . I think that and I think that we are all surprised But as audience members. He has a very sensitive side you know and like maybe the top exterior is the masking the sense that a person inside has been running this whole time you know so I think through their interactions and through their conversations people look more and more about him and I really admire the way that they’ve grown closer because they’ve kind of found each other in circumstances where they’ve needed one another.

It was definitely just the tip of the iceberg that we got to see the relationship flourish at the end of the season 3. Now there are millions of Karate Kid fans out there that fell in love with the show because they’re fans of the movie. Were you one of those fans of the franchise prior to landing the role and what was it like meeting Ralph and William?

Vanessa Rubio: I was particularly the first Karate Kid and the second one I remember seeing a lot when growing up it was surreal I mean maybe more surreal meeting and working with Ralph i was like “Oh my God it’s the Karate Kid” I was a little nervous for the the Mexican restaurant scene but they’re both such professionals they’re both. I’ve been in this business for so long and they’re just very gracious, very generous actors and people and working with Bill. He was great because you know we didn’t get to see the full character of Johnny. Really in the movie. So it’s almost like meeting a new person you know. I mean giving meaning a new character is all these different sides of them, of this of this character. So you know working with Billy of course I consider myself very very lucky because we get along very well and he’s very generous and  being present in order for us to create what we create.

When when you were a kid you put in this certain situation would you say you’d identify more with the Cobra Kai mentality or the Miyagi Do mentality?

Vanessa Rubio: As a kid myself yes as a kid Oh definitely Miyagi do. I’m not a natural bully at all. Yeah. And you know I did take karate classes when I was younger and like the sparring part always like you know kind of slightly terrified me like Oh my God. So yes I think Little V would take me Miyagi Do classes.

Now we weren’t really given the scenario in the season. But how do you think that Carmen’s interaction with Robbie go if they were ever to come face to face.

Vanessa Rubio: This is an interaction that I’m kind of really pulling for. Just in my own imagination. Yeah I think it would be really interesting to see how would she be able to see past the fact that he was the one who pushed Miguel off the second floor. You know seeing their their case and and then I think more importantly she I think is a very astute observer of relationships and you know feeling in order to move forward she had to deal with that herself. Third season so she had to actually walk her talk. And I think you know it would be interesting to see that interaction with Robbie because that Johnny son that’s the relationship I think that needs the most mending.

Definitely. I feel like you know Carmen’s character could actually help mend Johnny and his son’s relationship. I think she’d be the perfect one to help build that trust between them.

Vanessa Rubio: I agree with you.

Here’s a fun idea. You personally, it doesn’t have to do with anything that the writers have told you or anything but where would you like or what kind of stories would you like to see Carmen involved with or what do you see for the future for Carmen?

Vanessa Rubio: I would love to see the evolution of their relationship. Carmen and Johnny. I think it’s great. Me too. I think it’s a very romantic relationship and it’s always nice to get behind a romantic couple on screen you know. Yeah. And it gives me something to believe in and I think I would like to see that flourish. And you know teach them both and see them both come into this full courage that accepting love in their life. And the interaction with Robbie that would be amazing if that had happened and if it did happen you know some resolution or some closure of who Miguel’s father is.

I think he’s mentioned in the earlier scenes but we never really elaborate on that. So that’s that’s an interesting take. On that note this series is just a small part of the long running franchise that is Karate Kid. Now if there is another classic franchise that you could be a part of what would it be?

Vanessa Rubio: Great question. I could be a part of and not ruin. That’s all.

That’s always a double edged sword right. You know you want to. You want to be a part of something but you don’t want to ruin what’s already there.

But if that was if that wasn’t on the table.. That wouldn’t be a constraint.

Yeah but you are a huge fan of The Goonies as well?

Vanessa Rubio: I love the ability of time travel that we are able to do with entertainment. Like going back to the 50s and 60s. I just saw Amazon’s Sylvie’s Love.

Vanessa Rubio: Yeah they shot it in an element and it was just so beautifully done. Like the music. I love it to have something that involves beautiful music.

These are the 10 most hated restaurant chains in America – BGR

How to install the Google Weather app icon on your…

Elon Musk Made This Video Game When He Was 12 Years Old.…