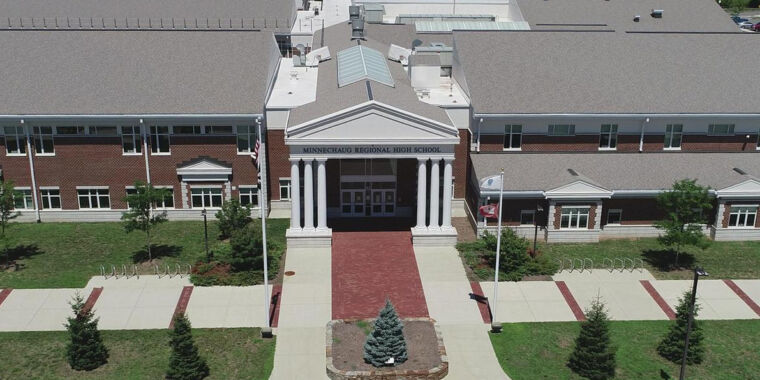 The lights at Massachusetts’ Minnechaug Regional High School burn ever bright. They actually never turn off. They can’t turn off. The smart lighting system for the entire building is broken, and it’s stuck in the “on” position. It has apparently been this way for over a year now, and the electric bills are really starting to pile up.

“We are very much aware this is costing taxpayers a significant amount of money,” the school district’s assistant superintendent of finance, Aaron Osborne, told NBC News. “And we have been doing everything we can to get this problem solved.”

The school’s entire “green lighting system,” some 7,000 lights, was installed over a decade ago and was supposed to save money, but according to the report, “the software that runs it failed on Aug. 24, 2021” and no one has been able to turn off the lights for the following 17 months. Teachers are adjusting by unscrewing light bulbs at the end of the day and throwing some breakers not connected to vital parts of the school. Dimming the lights to show movies or something projected on a whiteboard has also been difficult: The lights are on full brightness all the time.

News Editor Lilli DiGrande, writing for Minnechaug student newspaper, The Smoke Signal, did some great reporting on the situation a month after it started. The smart lighting company that installed the lights over 10 years ago, 5th Light, has apparently changed hands several times now and is currently owned by a company called Reflex Lighting. According to the Smoke Signal report, what’s left of 5th Light no longer has access to the old, proprietary software to fix anything, so “fixing” the system means replacing it with new hardware.

The problem with new parts is that this has all been in the middle of the pandemic and a huge chip shortage, so the parts have been back-ordered and delayed several times. The process of fixing the system was originally supposed to start in February 2022, but they can’t get the parts. The next missed date was October 2022, and the school isn’t expecting a repair until February 2023. The lights remain on.

Even if you aren’t in charge of the lighting design of a giant building, there’s a valuable lesson here for anyone getting involved with smart home/building technology: make technology an addition to your setup, not a dependency. You still need to install physical light switches in every room, but as a bonus, you can pick light switches that are also controllable via some kind of network. All sorts of smart light switches meet this requirement—normal paddles or even toggles that can also be controlled via Zigbee, Z-Wave, Bluetooth, Wi-Fi, probably Ethernet, or whatever you want. This way, if the Internet is down, or some server explodes, or some cloud company shuts down, the lights will still work.

What you definitely shouldn’t do is hard-wire the electricity to be always on and then hope the network to the light fixtures or light bulbs will be around to power them off. That’s apparently what happened at this school, and now taxpayers are paying the price.

Morale is low at ABC amid T.J. Holmes and Amy Robach affair