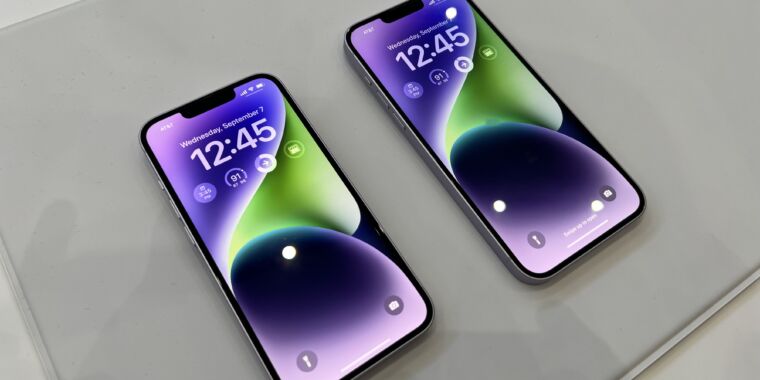 Republican lawmakers have warned Apple that it will face intense scrutiny from Congress if the California company procures memory chips from a controversial Chinese semiconductor manufacturer for the new iPhone 14.

Marco Rubio, Republican vice-chair of the Senate intelligence committee, and Michael McCaul, the top Republican on the House foreign affairs committee, said they were alarmed following a media report that Apple would add Yangtze Memory Technologies Co to its list of suppliers for Nand flash memory chips that are used to store data on smartphones.

“Apple is playing with fire,” Rubio told the Financial Times. “It knows the security risks posed by YMTC. If it moves forward, it will be subject to scrutiny like it has never seen from the federal government. We cannot allow Chinese companies beholden to the Communist party into our telecommunications networks and millions of Americans’ iPhones.”

Asked about the congressional concerns, Apple told the FT it did not use YMTC chips in any products but said it was “evaluating sourcing from YMTC for Nand chips to be used in some iPhones sold in China.”

Apple said it was not considering using YMTC chips in phones for sale outside China. It added that all user data stored on Nand chips used by the company were “fully encrypted.”

The FT reported in April that the White House and commerce department were investigating claims that YMTC was violating US export control rules by supplying chips to Huawei, the Chinese telecoms equipment group.

“YMTC has extensive ties to the Chinese Communist party and military. There is credible evidence that YMTC is breaking export control laws by selling goods to Huawei,” McCaul told the FT. “Apple will effectively be transferring knowledge and knowhow to YMTC that will supercharge its capabilities and help the CCP achieve its national goals.”

Chuck Schumer, the Democratic Senate majority leader, has also privately raised concerns with commerce secretary Gina Raimondo about YMTC, according to a person familiar with the situation.

YMTC did not respond to a request for comment about its relationship with Apple.

In July, a bipartisan group of senators—including Schumer and Mark Warner, the Democratic chair of the Senate intelligence committee—urged the Biden administration to put YMTC on a commerce department blacklist that would effectively bar US companies from providing technology to the Chinese group.

The senators, who included James Risch, the top Republican on the foreign relations committee, said YMTC should be put on the “entity list” as it was violating export control rules by selling memory chips to Huawei.

The lawmakers also accused Beijing of subsidizing YMTC in ways that would help put the “national champion” on track to dominate the sector by selling chips below cost, as China has done in other areas such as the solar industry.

“YMTC is an immediate threat,” they wrote to Raimondo.

One person familiar with the commerce department’s stance said it was aware of the concerns and was preparing a response to the senators.

A spokesperson said the department’s Bureau of Industry and Security was conducting a review of China-related policies that would “potentially seek to employ a variety of legal, regulatory, and, when relevant, enforcement tools to keep advanced technologies out of the wrong hands”.

McCaul, who is set to become head of the House foreign affairs committee if the Republicans win control of the lower chamber of Congress in November’s midterm elections, said the Chinese subsidies to YMTC posed a threat.

“Massive CCP subsidies to YMTC mean the company will undercut the market. This could very likely devastate the memory chip market and give China even more control of this critical national security technology,” he said. “How can the world’s data be secure if it’s stored on a chip made by a CCP national champion?”

Several people familiar with the situation said lawmakers had asked Apple in recent months about YMTC-related speculation but got no response. Apple did not comment on the congressional inquiries.

The criticism of Apple comes as the Biden administration steps up efforts to make it harder for China to secure cutting-edge technology. US officials recently told Nvidia and Advanced Micro Devices—two US chipmakers—that they would have to obtain special licenses to sell advanced processors used for artificial intelligence applications to Chinese companies.

Congress passed legislation in July that would provide US semiconductor manufacturers with a pool of $52bn to support development of the domestic chip industry and reduce reliance on foreign companies.

Underscoring the importance of YMTC for China, President Xi Jinping visited the company in 2018 after Washington slapped tough restrictions on Huawei and ZTE, another Chinese telecoms equipment maker.

“It’s pretty shocking that Apple is partnering with a Chinese technology company… which is in exactly the same industry as the other banned companies and has the direct support of the top CCP leadership,” said Zach Edwards, an independent tech expert.

© 2022 The Financial Times Ltd. All rights reserved Not to be redistributed, copied, or modified in any way.

Why do we mourn people we don’t know?

How rising sea levels could create zombie towns around U.S.