US bakes in extreme heat as federal climate action flops 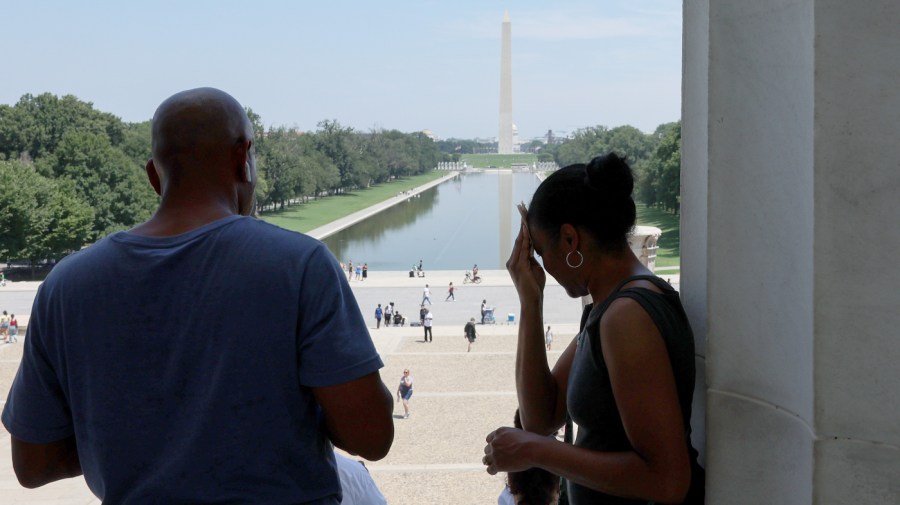 (The Hill) – The U.S. is roasting under an extended heat wave, with 28 states experiencing heat warnings and most Americans exposed to temperatures higher than 90 degrees this past weekend.

The deadly weather is severe on its own, but it’s also a sign of what’s to come as the planet heats up due to climate change.

And the sweltering conditions highlight Congress’s inability to pass meaningful legislation to combat the issue.

“We will see worse going forward simply because climate change will continue to make the planet warmer and warmer,” said Jonathan Overpeck, a climate scientist and dean of the University of Michigan’s School for Environment and Sustainability.

Over the past few days, temperatures in much of the country hit triple digits.

In Texas, record-breaking temperatures reached 115 degrees in Wichita Falls, with 110 hit in other cities in the state and Oklahoma.

Newark, N.J., also hit a new record at 102 degrees, with the temperature’s recorded at the city’s airport topping 100 for five days straight.

The heat has been lethal in multiple locations. A person died from heat exposure in New York City on Saturday, while Dallas County, Texas, also reported a heat-related death last week.

Maricopa County, Ariz., confirmed 12 heat-related deaths between July 10 and July 16, though it’s not clear whether the deaths actually occurred on those days, or if they were just added to the state’s existing totals during that time period.

As of last week, Tulsa’s Emergency Medical Services had responded to 85 heat-related illnesses — which can include heat exhaustion or stroke — so far this month. Sixty of those people were hospitalized.

According to the Centers for Disease Control and Prevention, 600 people in the U.S. each year are killed by extreme heat, though other studies put the figure much higher.

A 2020 study looking at counties representing about 62 percent of the U.S. population found that in those alone, there was an average of 5,608 heat-attributed deaths each year between 1997 and 2006.

Chris Uejio, a professor at Florida State University, said that heat can negatively impact the cardiovascular and respiratory systems, as well as kidneys, and that research is emerging on its impacts for mental health and dizziness.

“It impacts a wide variety of the body’s systems,” Uejio said.

The people most at risk typically include the elderly, people with pre-existing conditions, those who are pregnant, infants and young children, the homeless and those who can’t afford to pay for air conditioning and cooling, Uejio said.

Marc Chenard, a meteorologist at the National Weather Service, told The Hill that the temperatures are related to “larger-scale” weather patterns and high pressure.

Chenard said it’s hard to say whether or how much climate change contributes to specific events but climate change increases the risk of heat waves generally.

“The general consensus is that climate change in general would result in a higher frequency of heat waves across the country,” he said.

Overpeck, who has also contributed opinion articles to The Hill, similarly said, “It’s pretty unequivocal at this point that humans are playing a role in making heat waves more frequent, hotter and longer, all things equal.”

A 2021 study found that 37 percent of heat-related deaths during the warm season can be attributed to human-caused climate change. It also found that increased deaths are “evident on every continent.”

The extreme weather puts an additional spotlight on Congress, where Sen. Joe Manchin (D-W.Va.) recently backed away from Democrats’ climate legislation after months of negotiations.

That legislation would have put funding toward tax credits that were expected to spur clean energy deployment. Lawmakers were also weighing a fee on methane emissions for the oil and gas industry.

“I find it very frustrating,” Overpeck said when asked about government inaction. “We really do know at this point exactly what’s [happening] and why, and we have the solutions. And we know that future generations are going to bear the brunt of the disaster that we’re creating.”

After the legislation was jeopardized, all eyes have turned to the Biden administration, which could try to limit climate change through regulatory actions. But experts say that it will be difficult for the executive branch to make up the emissions reduction deficit that the legislative defeat caused.

Many climate advocates are also calling on the Biden administration to declare a climate emergency, which could unlock additional powers to take on the crisis. So far, Biden has not done so, but it’s not clear whether he will eventually.

In the meantime, Uejio said, there are policies on the adaptation side that both federal and state governments can pursue to limit the damage. He said this includes measures like not letting utilities disconnect the power during extreme weather events.

“Recognizing that we have to adapt to some heat now and in the future…there’s a variety of policies and programs that are cost-effective and can notably reduce heat-related illnesses and deaths,” he said.