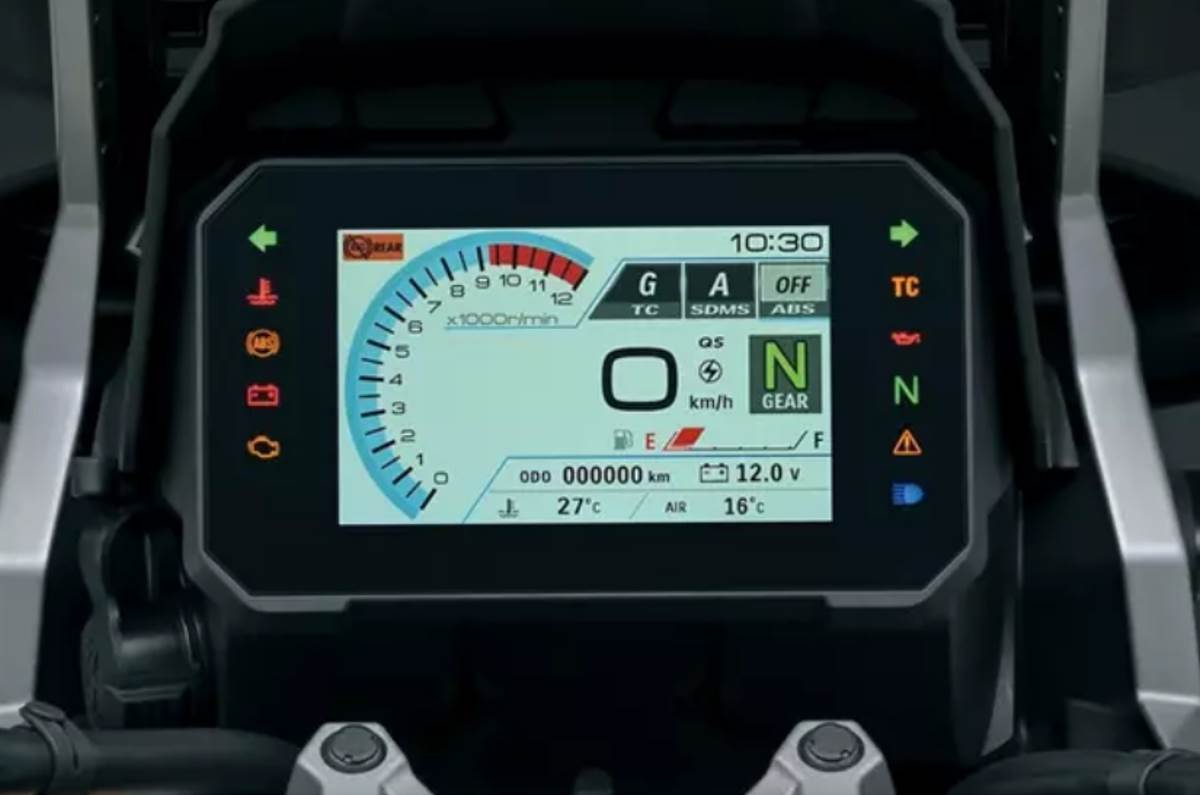 Suzuki has taken the wraps off its V-Strom 1050 range internationally, and it brings with it some comprehensive mechanical and electronic updates. The V-Strom 1050 is now offered in two variants, the standard road-biased 1050 and more off-road focused DE variant, which replaces the previously offered XT variant.

5-inch TFT display takes over from the old LCD unit.

The 1,037cc, liquid-cooled, V-Twin engine is carried over from the previous models unchanged and is good for 106hp at 8,500rpm and 100Nm of torque at 6,000rpm. The braking set-up remains unchanged as well with radial Tokico calipers biting down on twin discs at the front and a single-piston caliper clamping down on a single disc at the rear, paired to switchable dual-channel ABS. The fuel tank capacity is also unchanged at 20 litres.

This year’s bike features a new full-colour 5-inch TFT dash, derived from their GSX-S1000GT sports tourer. This new dash controls all the electronic rider aids, which benefit from the addition of a 6-axis IMU for more precise intervention. In addition to the riding modes, traction control and cruise control, which have been carried forward from the previous model, this year’s bike also features hill hold control and a bi-directional quickshifter.

The twin-spar chassis benefits from a lighter construction with aluminium castings and while the chassis is lighter, overall the standard bike tips the scales at 242kgs (6kgs heavier than before).

The changes made to the DE variant, however, are much more comprehensive and the V-Strom 1050 DE is now more serious about its off-road aspirations with its 21-inch front wheel. The DE variant runs on 90/90-21 (front) and 150/70-17 (rear) wire-spoke rims shod with Dunlop Trailmax Mixtour tyres. The standard V-Strom 1050 runs on relatively more road-biased radial Bridgestone A41 tyres wrapped around cast alloy rims with sizes of 110/80-19 (front) and 150/70-17 (rear).

The DE also gets its own bespoke aluminium swingarm, which accounts for a 40mm longer wheelbase while improving rigidity. A wider handlebar, shorter visor, chunkier foot pegs and levers are also part of the changes made to the DE variant to help the rider off the beaten path. The DE also gets a front fork with longer travel (Suzuki doesn’t say by how much), which helps in boosting ground clearance to 190mm (25mm more than the standard model). Rear wheel travel has gone up by 8mm over the previous XT model.

In addition to changes to the hardware, the DE variant also benefits from a ‘G’ (presumably gravel) mode in its traction control settings, allowing more slip in low traction situations. With all these changes comes a 10kg weight penalty over the standard model pushing the kerb weight of the DE variant to 252kg.

Given the fact that Suzuki doesn’t currently sell the V-Strom 1050 in India, there are practically no chances of this model making its way here. Internationally, it competes with bikes like the Honda Africa Twin and the Tiger 900 range. While the bigger V-Strom might not make it to our shores anytime soon, a smaller-capacity parallel-twin V-Strom was spotted testing recently, which should make its way here after its international launch.

Which variant of the V-Strom 1050 would you pick? Let us know in the comments section below.