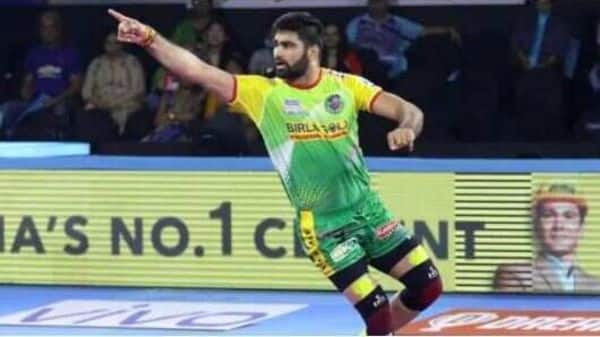 Pardeep Narwal emerged as the most expensive player in Pro Kabaddi history as franchise UP Yoddha bought him for a record price of ₹1.65 crore on the second day of the league’s auction conducted on Monday.

Meanwhile, Siddhartha Desai fetched ₹1.30 crore after Telugu Titans retained the raider who emerged as the second most expensive player.

On the day two of the ongoing Pro Kabbadi League 2021 auctions, foreign players and domestic players from A category went under the hammer on day two.

Apart from the Narwal and Desai who made it to the ₹1 crore club, other top player picks include Manjeet who was picked up by Tamil Thalaivas for ₹92 lakh while Patna Pirates bagged Sachin Tanwar for ₹84 lakh. Rohit Gulia was bought by Haryana Steelers for ₹83 lakh, Surjeet Singh was bagged by Tamil Thalaivas for ₹75 lakh while Ravinder Pahal has been picked up by Gujarat Giants for ₹74 lakh. However, Rahul Chaudhari was bought by Puneri Paltan for ₹40 lakh.

Meanwhile, a total of 22 foreigners have been sold in the foreign players’ auction so far. All teams need to have a minimum of two players in their squad for the 2021 edition of the Pro Kabaddi League.

Mohammadreza Shadloui Chianeh has emereged as the most expensive player as he was bought by Patna Pirates for ₹31 lakh. Three foreigners – Abozar Mohajermighani, Jangkun Lee and Mohsen Maghsoudloujafari – have been sold to Bengal Warriors, Patna Pirates and U Mumba, respectively.

The three-day auction process that concludes on 31 August will witness 12 team franchise bidding on a total of more than 450 players. Four new players have already been picked up on day one of auctions. Touted as the breakout non-cricket sports league owned by Mashal Sports, PKL made a stellar debut, but the overall buzz around it has been dwindling with erratic viewership and sponsor interest. The last edition had managed to hold audience attention, registering 9% growth with 1.2 billion impressions in 2019, as per data from TV ratings agency Barc. The league is returning after almost 20 months.

Chinese smartphone maker Vivo is currently the title sponsor of the league while other key brands sponsoring the tournament include Tata Motors and online faming platform Dream11.

Anupam Goswami, league commissioner, Pro Kabaddi and CEO, Mashal Sports said, “PKL is the second most viewed sports league on television in the country. We are committed to conduct the season 8 of the tournament this December with utmost regards to all the necessary covid protocols put out by the government.”

Denial of responsibility! My droll is an automatic aggregator of the all world’s media. In each content, the hyperlink to the primary source is specified. All trademarks belong to their rightful owners, all materials to their authors. If you are the owner of the content and do not want us to publish your materials, please contact us by email – [email protected]. The content will be deleted within 24 hours.
Pardeep NarwalPKLpkl 2021PKL 2021 auctionsSiddhartha DesaiTelugu TitansUP Yoddha
0
Share

Rahul attacks government, asks if Articles 15 and 25 of Constitution ‘sold’