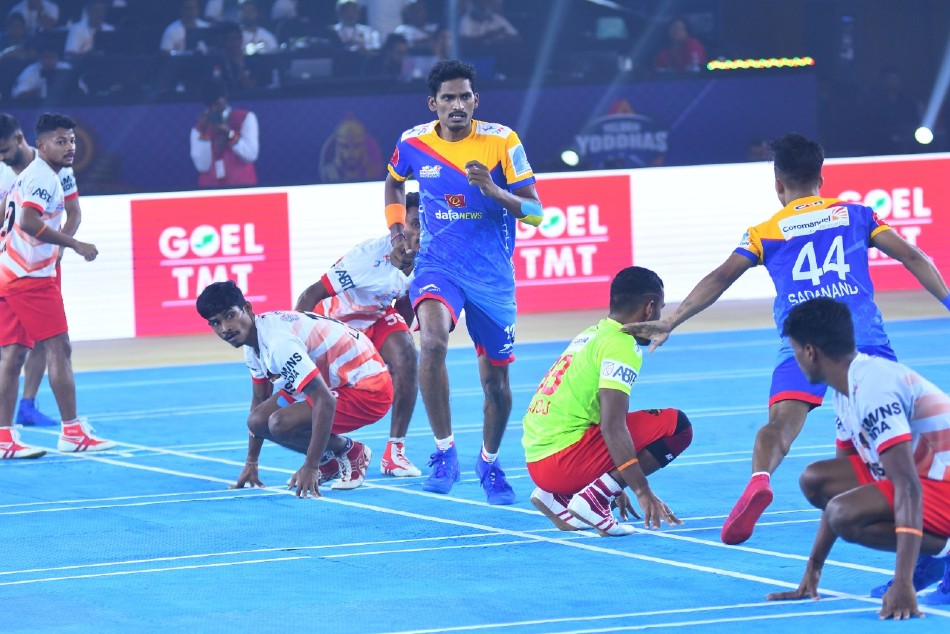 The Kho-Kho players also received special support from Prithvi Shaw on Wednesday as the young India batsman watched the matches and enjoyed the breathtaking action of Ultimate Kho Kho.

With 12 points, Dhruv played a crucial role in Telugu Yoddhas’ win along with Dhanush KC, who scored eight points.

Telugu Yoddhas started off the game aggressively against strong Odisha Juggernauts as they found themselves ahead in the game with a 28-26 lead at the end of the first innings.

Dhruv scored nine points by dismissing three players as Telugu Yoddhas added 27 more points to their tally to take the game away from Odisha Juggernauts.

Odisha Juggernauts tried making a comeback in the final turn but Sinam Rokeson Singh (4.01min), Thokchom Sadananda Meitei (2.59 min) and Sudershan (2.38 min) stood tall for Telugu Yoddhas in defence and helped their team complete an easy win in the end.

Earlier in the first match of the day, Rajasthan Warriors presented some challenge for Gujarat Giants, who have already cemented their position at the Top-2 of the points table. Rajasthan Warriors dismissed eight opposition defenders to take a 20-2 lead in the opening turn but Gujarat Giants were successful to keep themselves ahead in the game with a narrow 23-22 lead at the innings break.

However, Nilesh Patil provided Gujarat Giants a winning lead with less than two minutes left when he captured Yalla Satish with a skilled pole dive before they secured the match comfortably.

Playoffs will kickstart on Friday qualifier 1 and the eliminator while qualifier 2 will take place on Saturday. Final will be played on Sunday.

COVID Omicron Boosters About to Arrive, With Some Controversy