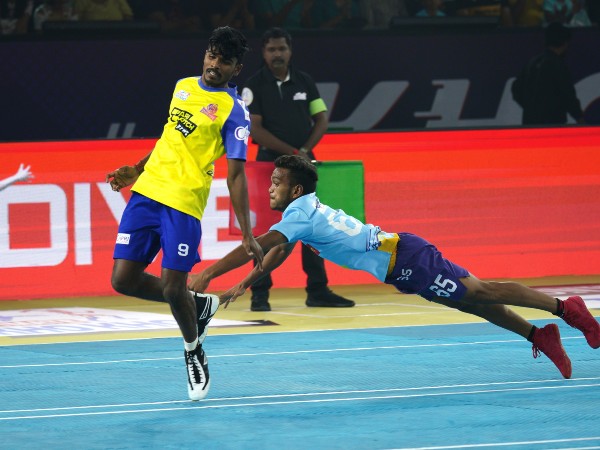 Scoring five points and defending for 3.13 minutes, Milind Chavarekar played a crucial role in Odisha Juggernauts’ 23-point win with a 60-37 score. Suraj Lande also contributed for the winning side with 12 points.

In Chennai Quick Guns’ win, Madan impressed in the defence with a crucial 3.55-minute stay while in-form Ramji Kashyap produced an all-round show by scoring 18 points and defending for 5.02 minutes as they won by 21 points with 57-36 score.

Extending their winning from of the last two games, Mumbai Khiladis added 16 points to put them ahead with 16-8 score in the starting seven minutes in the day’s second match but Odisha Juggernauts took just two minutes in the second run to go past opposition score, eventually ending the first innings with a 29-20 lead.

Chavarekar began the second innings, winning four bonus points for his stay of 3.13 minutes and then Dinesh Naik (2.34 minutes) added two more points in the defence to restrict Mumbai Khiladis to just a lead of two points in the third turn.

Odisha Juggernauts did not let the momentum slip away and scored enough points in the final turn to secure a victory as well as top position on the points table with 18 points.

Besides Odisha Juggernauts, Gujarat Giants have also secured their spot in the playoffs.

Mahesh Shinde also contributed in Chennai Quick Guns’ victory with the timing of 3.03 minutes. Akshay Ganpule, on the other hand, was the top performer for Rajasthan, scoring seven points.

Adding 20 points in the third turn, Chennai Quick Guns took the game away from Rajasthan Warriors with a strong lead of 34 points at 53-19. Rest of the game was mere formality as they won convincingly in the end.

P Narsayya gave Chennai Quick Guns their first breakthrough by dismissing Abhijit Patil in the first minute of the game before they secured a 23-point lead in the first turn.

Switching positions, Chennai Quick Guns kept things under control quite comfortably and denied oppositions too many points with Shinde, Kashyap and Madan exhibiting solid defence to keep their side in the lead at the end of first innings with a 33-15 score.

The Final will be played on September 4.