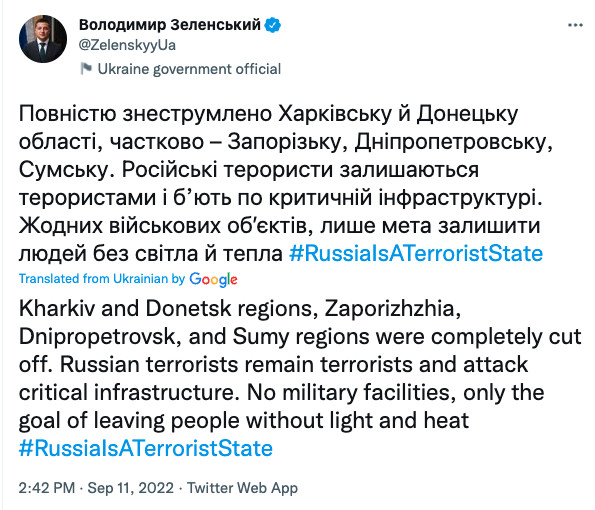 A surprise counteroffensive over the weekend saw Ukrainian troops push into areas around Kharkiv in the northeast, liberating villages and cities, and catching Russian troops flat-footed. The swift maneuvers threatened to encircle a portion of the Russian army and led them to rapidly abandon positions and military hardware as Ukrainian troops closed in.

The counteroffensive has recaptured around 1,160 square miles of territory since it began in earnest earlier this month, commander in chief of the Ukrainian Armed Forces Gen. Valeri Zaluzhnyy told the Associated Press Sunday. The eastward push caught Russian forces off-guard and forced several units to abandon their posts as Ukrainian troops took control of the strategic cities of Izyum, Balakliia, and Kupiansk — critical areas for the Russian supply and logistics line in the Donbas region.

It’s the most significant blow to the Russian military since Ukraine pushed troops out of Kyiv in March, and frees Ukraine’s second-largest city, Kharkiv, which Russian forces have devastated with near-constant shelling for months.

Russia, for its part, admitted to the losses, with the Russian Defense Ministry saying troops would “regroup” and head to Donetsk, a Russian-controlled area on Ukraine’s southeastern border. Russian President Vladimir Putin did not acknowledge the breakthrough on Saturday, opting instead to inaugurate a Ferris wheel in Moscow, which he bragged was the largest in Europe.

The lightning offensive comes as Ukrainian troops are also trying to liberate territory in the south, including the city of Kherson and the area surrounding the Zaporizhzhia nuclear power plant, which has been reconnected to the Ukrainian power grid in order to shut down its final working reactor. The plant has been occupied by Russian troops since March, with Ukrainian workers operating the facility. Fighting at Zaporizhzhia, which intensified last month, increased the possibility of a nuclear crisis at Europe’s largest nuclear power plant as experts called for the facility to be shut down.

While Russia still holds a vast portion of Ukrainian territory in the south and east of the country, Saturday’s push shows a Ukrainian military on the offensive rather than the defensive. It also shifts the battlefield landscape, disrupting the grinding dynamic that characterized the war for the past several weeks. Importantly, Ukraine’s well-planned and organized push exposes further weaknesses in the Russian formation and provides a crucial moral victory as the war stretches into its seventh month.

Western weapons, combined with intelligence and organization, are working

Though this week’s blitz took Russia and much of the rest of the world by surprise, it’s been an operation months in the making. Ukrainian forces advanced on the southern city of Kherson in recent weeks, both working toward the liberation of the region and directing Russian forces there. While Russian troops were tied up near Kherson, Ukrainian forces mounted a stunning attack on Kharkiv, threatening to surround Russian troops and forcing them to retreat hastily.

“This is months of planning, but also weeks and weeks of shaping operations by the Ukrainian forces,” John Spencer, chair of urban warfare studies at the Modern War Institute at West Point, told Vox in an interview Sunday. “Clearly there were other forces in the Ukrainian campaign to liberate their lands, ready to take advantage of any openings.”

Even leading up to the Kherson and Kharkiv offensives, Ukrainian troops had launched attacks on Russian weapons depots and command centers, which Spencer said helped shift the dynamics and set the stage — distracting Russian troops and weakening their command and supply chains — for Ukrainian troops to take back towns and cities near Kharkiv.

“The Ukrainian army has taken advantage of the relocation of the bulk of the Russian forces to the south and is trying to direct the course of the war, excelling in maneuver and showing great ingenuity,” Mykola Sunhurovskyi, an expert with the Kyiv-based Razumkov Centre, told the Associated Press.

Those advantages in intelligence, organization, and sheer will to continue the fight have, of course, been augmented by Western weapons, funding, and training. On September 8, the US Department of Defense committed an additional $675 million in weapons to Ukraine, including four howitzers and artillery, as well as ammunition for the 16 High Mobility Artillery Rocket Systems (HIMARS) systems in Ukraine, and additional armored vehicles.

“We are seeing real and measurable gains from Ukraine in the use of these systems,” Gen. Mark Milley, the Chairman of the U.S. Joint Chiefs of Staff, told reporters at Rammstein Air Base in Germany on Thursday. “For example, the Ukrainians have struck over 400 targets with the HIMARS and they’ve had devastating effect.”

What does this mean for the future of the conflict?

The Ukrainian military’s ability to plan, strategize, and execute such a stunning offensive also speaks to the Russian forces’ lack of preparation and strategy, Spencer told Vox, calling Russian troops in the area “un-led.” “Organizationally, it means they don’t have the capability to even do a measured withdrawal,” he said, comparing Russia’s orderly withdrawal from Kyiv back in March to this weekend’s retreat, where troops simply up and left, abandoning supplies, weapons, and vehicles.

“[In Kyiv], it was very deliberate, they used artillery to hold the position while they were withdrawing. What we’re seeing now is basically the opposite of that, literally just somebody finding out that a large formation is headed their way, and everybody just running, leaving everything in position,” Spencer said. “That means, in my mind, as a military vet, they didn’t have the commanders, or the junior leaders at the lower level to do a rapid plan to withdraw from their positions.”

While Russian troops’ shambolic retreat from Kharkiv doesn’t — and can’t — reflect on all Russian units, it does offer a glimpse behind the curtain at what Russian troops’ capabilities really are at this point in the war. And though Russia still holds swathes of territory in the south and east, the challenge of holding that territory will be significant; Ukrainian troops formerly defending Izyum and Slovyansk, its neighbor to the south, are now freed up to join and reinforce the counteroffensive, according to a situation report from the Institute for the Study of War (ISW).

It’s also a moral victory for the Ukrainian military; after months of gradually ceding villages and cities in the south and east to Russian control, it’s the first time the armed forces have been able to take the initiative and wage a strong offensive. It’s also evidence for Western donors that with the appropriate supplies and training, the armed forces can be incredibly effective, even against an adversary with more weapons and more troops.

Ukrainian forces will also now have access to those Russian weapons and supplies left behind, since in their haste, “Russians have not been mining areas they retreat from as they did when they pulled back from around Kyiv,” according to the ISW. “They are leaving behind large amounts of equipment and supplies that Ukrainian forces can use.” Those supplies are welcome as Ukraine struggles to convince some Western countries, like Germany, to hand over needed supplies and some US stocks, like the 155mm ammunition used in howitzers, near depletion.

“This is battle over cities and logistical hubs” more than simply territory, Spencer told Vox, and “actually changes the entire battlefield calculus of the Russian lines of communication or their support lines.” Kupiansk, to the north of Izyum, was the only railway hub supplying Russia’s frontline troops in the region. On Saturday, Ukrainian troops hung the flag in front of Kupiansk city hall, Reuters reported.

Izyum was a critical logistics hub for Russia’s Donbas campaign. Without that territory, getting supplies from just over the border in Belograd will be impossible, making it more difficult for Russia to hold territory.

Despite Ukraine’s major strategic gains this week, Russia is still in control of the Donbas, the region composed of the Donetsk and Luhansk oblasts and Crimea, a crucial staging ground and supply hub for the Russian Navy and territory in the south. “Crimea is the only way to support the grouping of troops in the Kherson and Zaporizhzhia regions,” independent Russian military analyst Pavel Luzin told the New York Times. “Otherwise, this grouping of troops does not exist.”

As of Sunday evening local time, Russia has also reportedly begun to retaliate, with Ukrainian President Volodymyr Zelenskyy tweeting that an attack on Kharkiv’s power plant left the city without electricity. “Donetsk regions, Zaporizhzhia, Dnipropetrovsk, and Sumy regions were completely cut off” as well, according to Zelenskyy. “Russian terrorists remain terrorists and attack critical infrastructure. No military facilities, only the goal of leaving people without light and heat.”

During a September 8 visit to Kyiv, US Secretary of State Antony Blinken pledged continued support for Ukraine and a further $2.2 billion in military aid for Ukraine and for 18 other nations considered at risk of Russian invasion. Though the US has been able to put real muscle behind its words of support, the question of whether the west can maintain solidarity with Ukraine in the face of crippling energy prices due to Russian sanctions and the potential for severe hardship in poor nations because of halted grain exports remains.

Zac Purton makes hay in Joao Moreira’s absence: ‘it’s a lot easier for me when he’s not out there’ | HK Racing