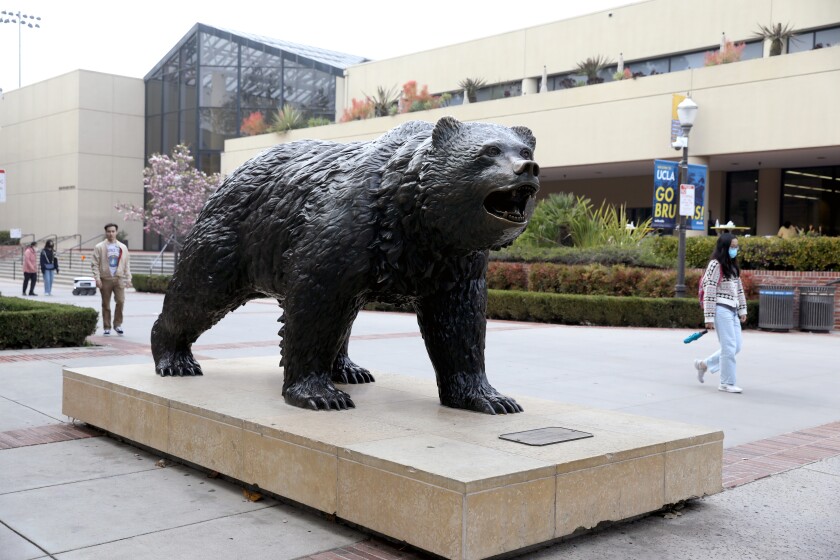 The complaint came in 2018 from a whistleblower about UCLA’s School of Dentistry. Three professors had allegedly solicited international postgraduate students for unauthorized fees on top of the already hefty tuition.

The design of the alleged profit-sharing scheme was bold: Certain orthodontics residents were required to pay extra fees and the professors received incentive and bonus compensation based on the payments.

Spots in UCLA’s prestigious, highly selective orthodontics program are at a premium, with only a handful earmarked for international students. Annual tuition for those students approaches six figures.

After investigating the allegations, a law firm commissioned by UCLA issued a report that concluded the professors targeted Middle Eastern students believing their wealthy government sponsors “could — and would — pay for it.”

The professors disguised the payments, including some monies that should rightly have gone to the university, and benefited from them, according to court records reviewed by The Times that described the report’s findings.

Despite the report’s findings of misconduct, each of the three professors entered into settlements with the university and resigned. In one case formal charges were dismissed, and in the other cases pending disciplinary hearings were stopped, the court records said.

Now, the professors are waging a legal battle to keep the report cloaked in secrecy, claiming it is a confidential personnel record and its disclosure would violate their privacy.

In June, a Los Angeles County Superior Court judge ruled the law firm’s redacted investigative report can be released. The professors are unnamed in the legal proceedings and referred to as John Does 1, 2 and 3.

In weighing the professors’ privacy interests against the public interest of disclosure, Judge Mitchell Beckloff noted the investigative report “supports a finding the whistleblower’s complaint was well founded and substantial.”

“Petitioners worked at a public university. They were professors occupying positions of trust, responsibility, and authority,” Beckloff wrote. “The allegations of misconduct are unquestionably serious and substantial. The public has a strong, legitimate and weighty interest in knowing whether and how the university enforces its rules.”

The professors appealed the decision. The case remains ongoing, and UCLA continues to withhold the report.

The Hueston Hennigan law firm claimed to have reviewed more than 300,000 emails and 79,000 associated documents during its investigation, according to the judge’s tentative ruling. The firm also reported that it interviewed the three professors and more than 40 related faculty, administrators and current and former students before concluding in May 2020 that serious misconduct had been committed.

According to court records, Hueston Hennigan found two of the professors to have violated university policy and California conflict-of-interest laws. The third professor was found to have retaliated against another faculty member by alleging the faculty member “had committed academic misconduct,” constituting “improper governmental activity” and violating the UC faculty code of conduct.

John Does 1 and 3 were presented with notices of intent to dismiss and John Doe 2 had an unspecified formal charge submitted against him, said court records drawing from the report.

The formal charge was later dropped, and no disciplinary hearings were held.

The university has not released settlement records or the dismissal notices, which could provide more details of the events. The total number of students solicited, the money collected and the duration of the alleged scheme are unclear. UCLA has not provided information to The Times in response to its requests for those details.

“Upholding UCLA’s values of transparency, integrity and accountability, we engaged an external firm in 2018 to examine past use of the clinical training program at the Section of Orthodontics and have taken several steps to ensure improved adherence to School of Dentistry and university policies,” said a UCLA spokesman. “Due to privacy concerns and pending litigation, we aren’t able to comment further.”

Court records and public records documents reviewed by The Times name Kang Eric Ting as one of the John Does. UCLA and the professors’ attorneys would not disclose the other identities.

Ting served as chairman of the orthodontics section of the dentistry school from 2004 to 2019, when he was removed from the position.

Allegations of wrongdoing have been leveled against the orthodontics program and several of its officials over the years.

In 2007, the Daily Bruin looked into claims that donations influenced admissions to the orthodontics program. In the campus newspaper article, an alumnus claimed Ting admitted to the preferential treatment to increase revenues. Ting denied the allegations. An investigation by the chancellor’s office found no evidence of wrongdoing.

In July 2020, Ting filed a lawsuit in Los Angeles County Superior Court alleging retaliation and employment discrimination and claiming that UCLA created a “campaign of abusive conduct” when he took leaves of absence to tend to his sick father and his own health issues.

In the suit, Ting claims that false accusations about violating admissions policies were made against him and another orthodontics professor, Won Moon, but that a formal committee had “reluctantly concluded” Ting had committed no wrongdoing.

In his lawsuit, Ting acknowledged he was also a subject of the Hueston Hennigan investigation.

In December 2020, Ting moved to dismiss the case. Its status is unclear.

Ting is now an adjunct professor at the Forsyth Institute and executive director and founding board member for the International Orthodontics Foundation.

Ting and Moon did not respond to phone and email requests for comment.

Moon was the former program director for the section of orthodontics. According to court documents filed by Ting, Moon was appointed to replace Ting as chairman of the orthodontics section in January 2019. Moon is no longer at the university, according to his website.

In their lawsuit to block its disclosure, the professors — identified in the lawsuit as John Does— denied the accusations in the Hueston Hennigan report, claimed it was one-sided and noted the university never substantiated findings of misconduct. Through their attorneys, they declined to be interviewed.

In a joint statement, their attorneys said:

“Our clients vehemently deny the meritless accusations made in the Hueston Hennigan report. We believe our clients’ rights to due process were violated during the course of the investigation. We question the pretexts under which it was launched, the way in which it was conducted, and the reasons why it has now been leaked, especially since the UCLA administration knows well that a truly independent and transparent investigation would have shown that the accusations were entirely unfounded.”

Martin Martz, a former clinical faculty member at UCLA’s dental school, was one of many interviewed as part of the investigation. He submitted a public records request for the investigative documents in March 2021 that spurred the professors to file a lawsuit against the university to block their release. They named Martz as a respondent, alleging he sought the documents because of a personal grudge.

He has since been subjected to thousands of dollars in legal fees and months of litigation.

The Times has also filed a public records request to obtain the full Hueston report and other related documents.

According to the judge’s tentative ruling, the Hueston report found the professors misrepresented and disguised the students’ additional payments to avoid 40% of the funds going to UCLA. However, it is unclear how the alleged “profit-sharing scheme” operated or how much each of the professors purportedly benefited from the alleged misrepresentations.

The orthodontic clinic employs a wider UC system program that allows some faculty to receive additional compensation — a percentage of the clinic’s income — on top of their base salary. Requests to participate require approval by the dean of the dentistry school.

The arrangement is intended to “recruit and retain outstanding faculty and enables faculty to engage in clinical and public service activities in support of our mission,” a UCLA spokesperson said.

The university declined to provide further details about the program. It is unclear if the professors’ alleged profit-sharing scheme was tied to the compensation program.

UCLA is ranked as one of the top six institutions in the world for dentistry and oral sciences. The orthodontics certificate program admits from six to eight students each year, with four of those positions earmarked specifically for international students, according to the admissions website.

Residency program fees are $70,000 a year for international students. Tuition for the joint master’s program is an additional $30,000 a year.

US Open 2022: Two-time champion Naomi Osaka eliminated by Danielle Collins in the first round