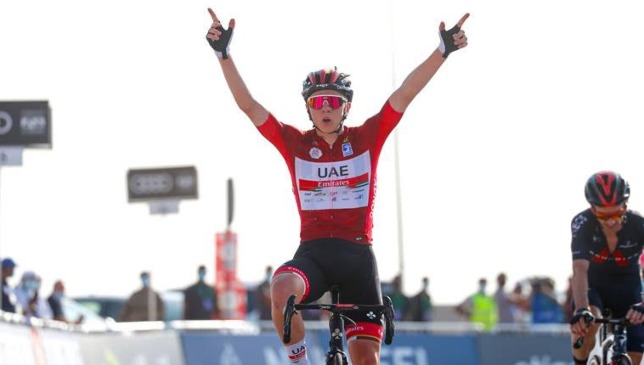 Tadej Pogacar prolonged his lead on the UAE Tour as we speak after the reigning Tour de France champion rode the right race in a powerful group efficiency that gave the Emirati group its first stage win of this 12 months’s UAE Tour.

Stage 3 of the UAE Tour introduced the peloton from Strata Manufacturing in Al Ain to the Tour’s first summit end atop the picturesque Jebel Hafeet.

A excessive tempo was set all through by the UAE Team Emirates’ group who had Jan Polanc, Davide Formolo and new man Rafal Majka all main the road on behalf of Pogacar up till the ultimate 5km.

Pogacar’s closest GC rival, Adam Yates (Ineos Grenadiers) pulled away from the group with about 4km to go along with the Slovenian managing to remain on his wheel. With the stress to win on house soil, Pogacar cooly marked Yates’ wheel and stayed with the Brit at each breakaway try.

Yates couldn’t shift Pogacar and with slightly below 400 metres to go, Pogacar kicked on and sprinted his solution to the end line, overtaking Yates and racing to UAE Team Emirates’ first stage victory of the 2021 UAE Tour in emphatic trend.

Tadej Pogacar on his stage victory mentioned: “We wanted a win, we got one. It was a really tough day, kind of stressful because there was a small chance of echelons again, but the team did a super, super good job. We stayed in the right spots in all the race and the guys drove me to the bottom of the climb really good and then set the pace. All I had to do was respond to attacks. It was super hard but I’m super happy to win.”

Pogacar now has an total lead of 43 seconds on Yates and 1:03 on Almeida within the General Classification standings however insisted the race was not received but. “There’s still four stages. Anything can happen. There could be echelons and there’s still one more climb. It will be a hard battle until the end.”