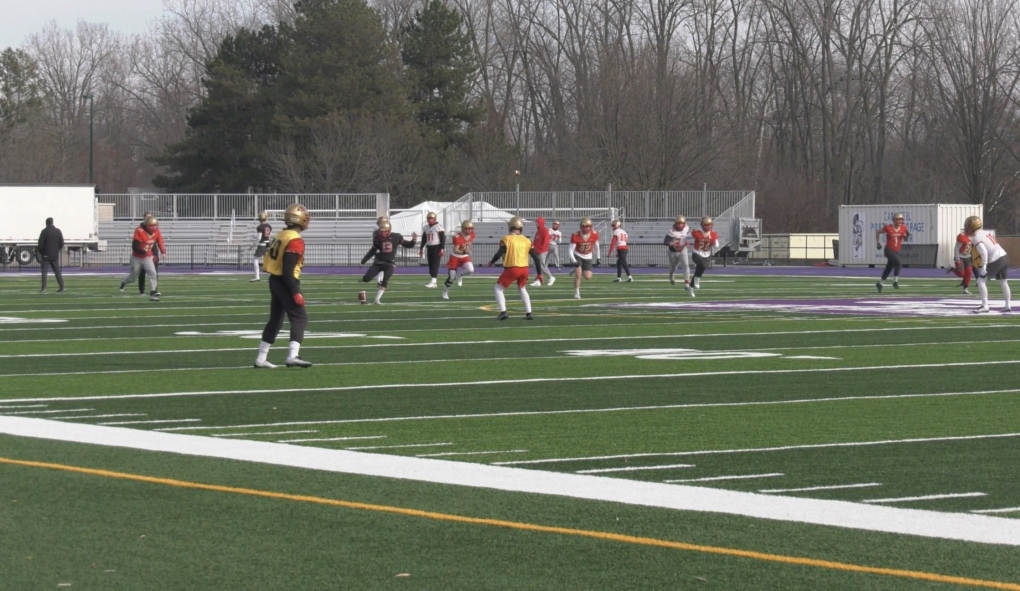 While teams from Laval University and the University of Saskatchewan may be vying for the cup, the City of London could be the big winner.

This Saturday will see a rare Vanier Cup meeting for two of the top university football programs in the country.

U-Sports, the agency that oversees Canadian university sports, held a news conference Thursday morning with coaches and players from both teams on hand.

The two teams also held practices on the turf at Alumni Stadium on Thursday, but they’re not the only ones who are continuing to prepare.

Western has added additional bleachers at stadium and more seats have been freed-up for the expected influx of fans.

Christine Stapleton is director of sport and recreation for Western. She said the university, the City of London and Tourism London have been working relentlessly to make the week and the weekend a success.

“We found out six months ago we were putting this game on and it’s not a marathon, it’s been a sprint to the finish,” she said.

Alumni Stadium sold out early, with local fans hoping to see the Western Mustangs vying to win back-to-back Vanier Cups, as the second would have been the first championship won on home turf.

They came up just short in a 27-20 loss to Laval during the Mitchell Bowl, played in London, on Nov. 19.

While that was a disappointment for Western’s team and fans, Tourism London’s Zanth Jarvis reluctantly admits it may have been a win for the city.

“As depressing as it was, being Western fans that they were eliminated, it is better for tourism to have two out-of-town teams come in,” he said.

He’s confident Western alums would have provided a boost for tourism, but Jarvis explained both the Huskies and the Rouge et Or have dedicated fan bases who travel well and will fill hotel rooms and restaurants.

“We’re hearing fans of Saskatchewan fans chartering flights and Laval fans jumping on the bus,” he said. “We’re excited to welcome them all in and we’ll certainly see an impact from that.”

Jarvis said that goal, as always, is to make good impression on visitors.

With the Brier coming up in March, perhaps some of those football fans will make a return to watch some curling, trying some different restaurants and visiting some other venues along the way.

Meet the global banker who bets on Indian startups

Has the FTX mess iced venture interest in crypto? •…