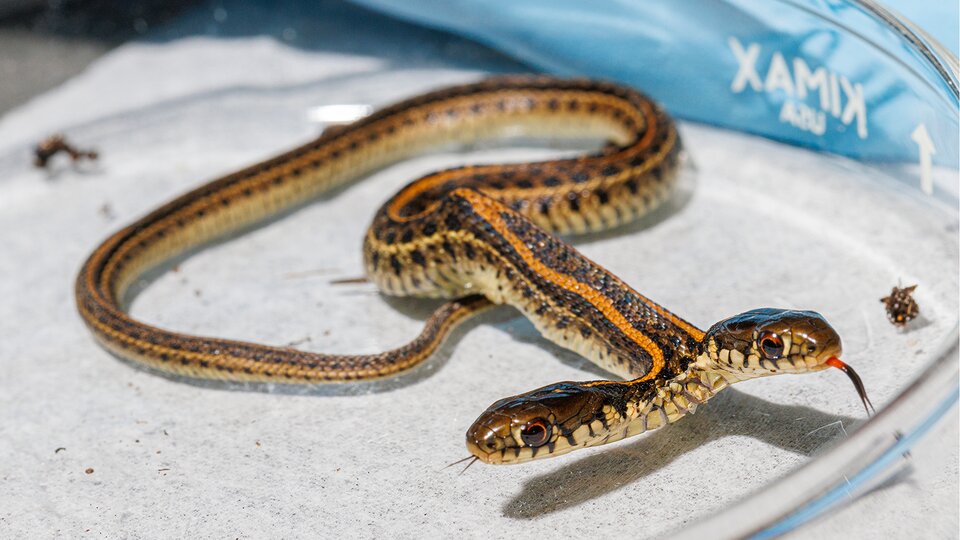 The University of Nebraska–Lincoln’s herpetology lab is seeing double after securing a two-headed garter snake.

The newborn bicephalic garter snake was discovered by Joshua Marshall of Hastings while clearing brush in Clay Center on Sept. 4.

“I lifted up a log and wasn’t surprised to see two small snakes, but then I realized that they weren’t making great progress because there were two heads,” he said.

Once Marshall realized it was a two-headed snake, he placed it in a jar and reached out to a local conservationist. The call led him to the University of Nebraska–Lincoln’s Dennis Ferraro, assistant professor of practice in herpetology, who happened to be doing fieldwork at Cedar Point Station. Ferraro was able to retrieve the snake during the evening of Sept. 4.

Ferraro said this is only the second time he’s had a two-headed snake in his lab, which he’s led for more than 20 years.

What makes this snake even more unique is that the split heads extend down past the necks.

“Usually when snakes have two heads one will take over,” he said. “This one has two necks, which means that neither will become dominant. The two heads operate independently and eat independently. This would have made it difficult to survive in the wild.”

There is also at least a centimeter of spine connected to each head, before it merges into one.

“I don’t know what’s controlling its back half,” Ferraro said.

That’s just one question that Ferraro would like to answer as he studies the snake. While the newborn is still too small for X-rays, Ferraro plans to care for it until it’s large enough for more advanced observational studies.

According to Ferraro, genetic mutations are common with garter snakes, which most likely caused this phenomenon.

By caring for the snake, Ferraro is supporting his lab’s overarching goal of conserving amphibians, turtles and reptiles while learning more about it. He has questions such as how its neurology works, how it has survived this long, and if it can survive with both heads.

Ferraro has pursued his passion for conservation in Nebraska for decades. He spends time traveling across Nebraska studying species and contributing to conservation efforts. He receives many calls from Nebraskans, and dedicates time to educating them on the animals-especially those that people may fear. His lab houses a pair of every amphibian, turtle and reptile that is native to Nebraska. This semester, he is educating more than 200 students through courses, some of which will get to observe the snake.

“I’ll definitely let students see it, especially when we’re going over genetics and mutations,” he said.

Provided by
University of Nebraska-Lincoln