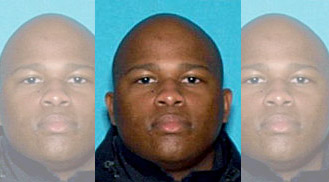 DUBLIN — An Alameda County sheriff’s deputy burst into a Dublin house just after midnight Wednesday and allegedly gunned down a married couple living there in what appeared to be an execution-style killing.

The killing prompted a manhunt for the deputy, Devin Williams Jr., that stretched from the Bay Area to Fresno County before Williams called his superiors at the Sheriff’s Office and surrendered around midday. After being interviewed by investigators, he was expected to be temporarily booked into the Santa Rita Jail — the very place where he stood guard during an overtime shift less than two hours before the killings.

Authorities were still searching for his Alameda County Sheriff’s Office-issued firearm that he ditched along the Altamont Pass while fleeing into the San Joaquin Valley, according to Lt. Ray Kelly, a sheriff’s spokesman.

In announcing Williams’ arrest, officials at the sheriff’s office voiced confusion and grief at the grisly violence wrought by one of their own.

“As you can tell, our agency is in shock,” Kelly said. “This is not something we deal with. This is not what we’re about. We had no idea this could happen.”

The manhunt began after police were called about 12:45 a.m. to the 3100 block of Colebrook Lane when a caller told dispatchers that an intruder had entered the home wielding a gun. When officers arrived, they found a 42-year-old woman and her 58-year-old husband fatally shot, Kelly said.

The names of the two people killed have not been released. They were among six people in the house at the time of the killings, including a child and a relative from out of town who made the 911 call, Kelly said. No one else in the house was injured.

A law enforcement source said the couple was killed in an “execution style manner.”

The couple and Williams knew each other, though authorities have given few details about a possible motive for the killing.

“He knew them — this was not a random crime,” Kelly said. “This was a very bizarre chain of events that unfolded.”

The gunshots startled several people on the block, including Lisa Davis, 63. She looked outside her window and heard a woman’s shrill scream and crying.

“She said, ‘Oh my God, what are you doing? What are you doing?,’” Davis said on Wednesday evening. A man then ran out of the house and sped away, Davis recalled. It was too dark to tell what he was wearing, she said. “He got in his car and he just jammed out of here. He just took off like a crazy person.”

Williams was taken into custody near the town of Coalinga — a rural community about 60 miles southeast of Fresno — with the help of the California Highway Patrol. His surrender followed a 45-minute conversation with Dublin Police Services Chief Garrett Holmes, who also serves as a commander at the Alameda County Sheriff’s Office.

Holmes said he was taken aback by the day’s grisly events.

“It’s a great loss for our community,” Holmes said. “And it’s even more disheartening to find out it was one of our own that actually was the trigger person behind this tragic incident.”

Williams, of Stockton, worked at the sheriff’s office for a year and was assigned to the courts division, Kelly said. On Wednesday, he started his day at 8 a.m. working at an Oakland courthouse before taking an overtime shift at about 5 p.m. at the Santa Rita Jail in Dublin — about a five-minute drive from where the slain couple lived.

He got off work at 11 p.m. from the Dublin facility, less than two hours before the killings, according to Kelly.

Before joining the sheriff’s office, Williams briefly worked as an officer for the Stockton Police Department from March 2020 to January 2021. However, he failed his probationary period with that agency, Kelly said, because “his ability and his skillset weren’t meeting the criteria that this job demands.”

Stockton police confirmed his employment, but a spokesperson said the department would not comment further.

But, Kelly added, “somewhere in the last several months of his life, some significant events happened that led up to this moment. A lot of those events went undiscovered and undisclosed, and we’re going to be looking into that. There’s a lot of questions that need to be answered.”

Attempts to speak with Williams’ family were unsuccessful. Williams appears to live with his parents in Stockton at a home in a gated, country club community on the San Joaquin River, according to public records. A woman reached on a number associated with Williams’ family declined to comment Wednesday.

Residents of the Dublin Ranch subdivision described the neighborhood where the killings happened as a quiet enclave for families with young children — a place where people moved to enjoy spacious houses and the benefit of walking their children to the nearby elementary and middle schools.

“Nothing happens on this street — the only thing that happens here is kids draw on the streets” in sidewalk chalk, said Charles Goshey, 74, a neighbor who has lived on the street for more than a decade. “You can almost time what time of day it is by moms walking their kids to school.”

The homicides are the first in Dublin since Nov. 28, 2020, when Bay Area rapper Lil Yase, whose real name was Alexander Mark Antonyyo Jr., was shot and killed near the East Dublin/Pleasanton BART station.

Williams was expected to be booked temporarily at Santa Rita Jail on Wednesday evening, but due to a conflict of interest, the sheriff’s office is requesting another county take him on a “courtesy hold.”

I’m at the scene of a double homicide investigation in Dublin. @3rdERH has the initial details:https://t.co/4lEEcaYR7l@EastBayTimes pic.twitter.com/wawjDoC3qH