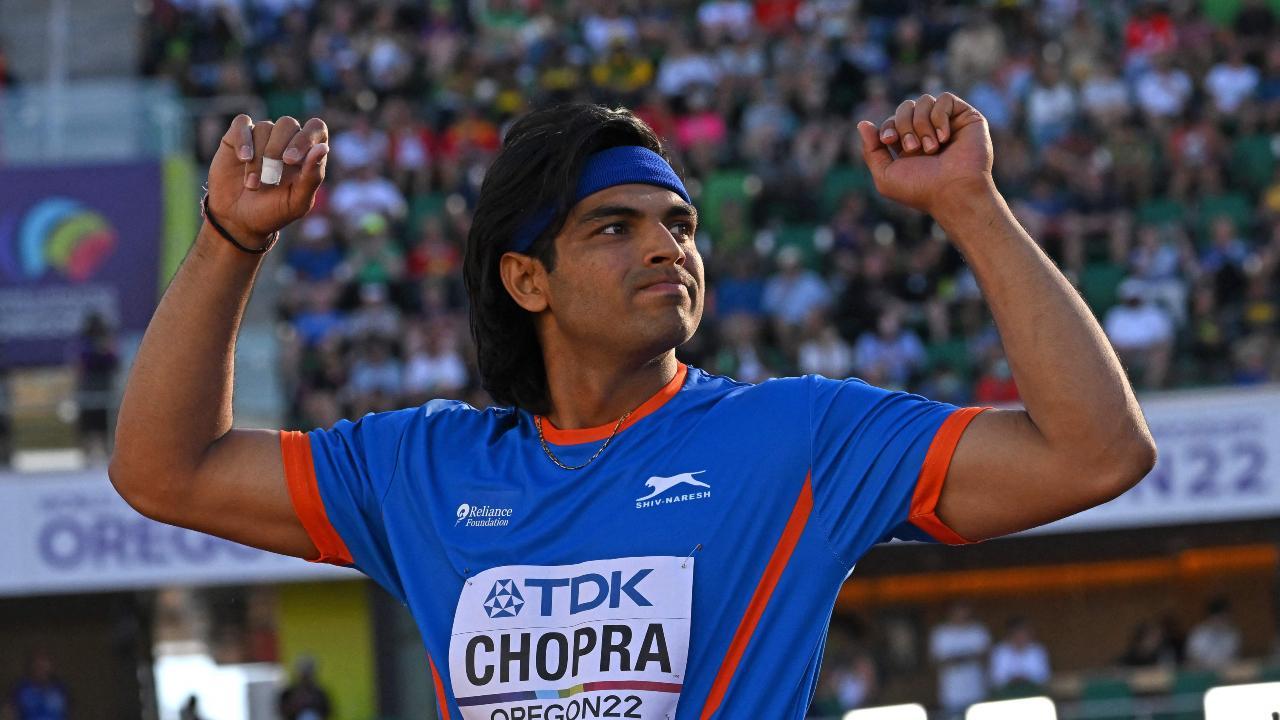 Chopra who had come into the event as hot favourite, secured the medal with a throw of 88.13m finishing second

India’s Neeraj Chopra reacts as he competes in the men’s javelin throw final during the World Athletics Championships at Hayward Field in Eugene, Oregon. Photo/AFP. Source/PTI

Javelin star and Olympic champion scripted history today as he became the only second Indian and the first ever male track and field athlete to bag a silver medal at the World Championships 2022 in the javelin throw final. Chopra who had come into the event as hot favourite, secured the medal with a throw of 88.13m finishing second. Chopra started the final with a foul throw and recorded 82.39m and 86.37m that saw him finish fourth after three rounds. However, he got his groove back after he threw a best of 88.13m, that sent him second in the list. Defending champion Anderson Peters of Grenada won gold with a best throw of 90.54m while Olympic silver winner Jakub Vadlejch of Czech Republic took the bronze with 88.09m.

Olympic Champion #Neeraj Chopra wins Silver Medal in men’s Javelin Throw final of the #WorldAthleticsChamps with a throw of 88.13m

What a champion, what an athlete!#Oregon2022,JavelinThrow,88.13m

Second only to win a medal at the WCH for India after long jump legend Anju Bobby George (Bronze, Paris 2003,6.70m)@g_rajaraman pic.twitter.com/cHFP3KdnBv


Neeraj Chopra can’t improve on his 88.13m in his final attempt in the men’s javelin throw. He still creates history becoming the first Indian man to win a medal at the World Championships. He takes silver behind Anderson Peters who retains the world title he won in 2019.


Neeraj Chopra has created history again by winning a silver medal at World Athletics Championship in Oregon. He becomes the 1st man and the 2nd Indian to win medal at the World Championships after long-jumper Anju Bobby George’s bronze in 2003.
Congratulations @Neeraj_chopra1 ð®ð³ pic.twitter.com/H6epZwCMPu


Many congratulations @Neeraj_chopra1 for your silver at the worlds ! You make us proud. Well done and the best for the rest of the season.

Biden’s global promises held back by politics at home

Roger Federer’s Dominance on the Court, In 16 Astonishing…