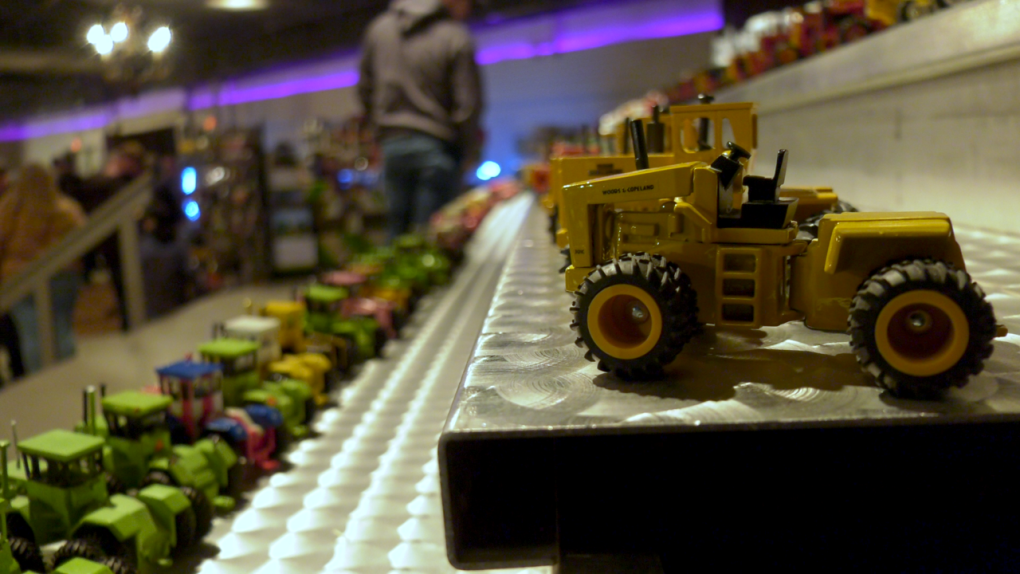 Like many farmers across Saskatchewan, Leif and Jarret Sperling have spent thousands of hours making sure their farm equipment is operating just right.

The only difference is the Sperling farm and its many pieces of machinery are made of entirely model toy parts.

“When you’re finished, it’s almost the best accomplishment,” Leif Sperling said. “Maybe not to other people in the world, but to me it was a big accomplishment, and it was pretty cool.”

The Sperling twin brothers were just two of dozens of vendors at the Western Development Museum showing and selling their items at the 34th Saskatoon Farm Toy and Collectible Show.

Raised three miles north of Dalmeny, farming is in their roots, and with little else to do growing up, the farming equipment quickly fascinated the boys as youngsters.

“My brother and I loved finding out how stuff worked and looking at the equipment my dad had and watching him operate the equipment,” Jarret said. “We were probably a little to interested in it… so that’s how we came about this kind of innocently.”

Leif, admittedly the better solder worker of the two, spent his days sitting alongside dad on the combine watching all the moving parts, and downtime in the yard helped him study machinery even closer.

Roughly 12 years into their hobby, the Sperling twins have taken their love of farm toy collectibles to another level. While there are models of nearly every tractor in various scales, they quickly noticed the tractors sold by the toy companies are more suited to soy and corn farming and didn’t represent the common machinery seen on the Prairies.

So they have decided to build their own attachments, like drills, augers and headers for the combine.

“It sounds weird, but it’s really (more) fun than you think to build these models, and you get a great sense of accomplishment when you’re done,” Jarret said.

Leif is most proud of his set of 9350 John Deere hoe drills, which took him roughly four years and about 400 hours to build in three different homes.

While both brothers are quick to compliment each other’s craftsmanship, they’re also quick to admit their skillsets don’t align.

“I look at my brother’s toys and I say, ‘Man, I wish I built toys like you,'” Leif said. “And he says the same thing to me, so we both have very different skills.”

Farming backgrounds and the various collections passed down from generation to generation are a common origin story at collectible shows.

“They can relate to the equipment that you build and you can ask them questions about their farm. I really enjoy that part of it,” Jarret said.

Stephen Dewald is from Denzil, Sask. and was quickly captivated by his cousin’s collection of roughly 30 toys as a child. By the time he graduated high school in 1999, he was looking to spend any of his spare money on collectible farm toys.

“You get a job and you’ve got money to spend. I don’t drink. I don’t smoke. I don’t gamble, but I love to waste money. So this is it,” Dewald said.

Organizer Neil Isley was happy to see big crowds return to the show after COVID-19 interrupted the usual hustle and bustle the last couple of years.

More than anything, the anticipation of the show and the entire weekend give him, the vendors and the patrons a real sense of community. He’s been displaying his items since 2004, and in that time has been able to make close connections with people from all over the province.

“The vendors have a bit of their own little community. Everybody knows everybody,” he said.

Both Sperling boys are fathers to young children, so the spare time to meticulously craft a perfect hoe drill has dwindled significantly, but as long as there are toy collectible shows and an interested audience to exchange stories with, the Sperling boys will be there with along with their unique creations.

“It reminds me of being a kid growing up on the farm, where you do feel like you’re part of a family because you do have a lot of the same experiences as these people,” Jarret said. “When you talk to these people it does feel like home.”