Tua Tagovailoa took two big hits in a week. What is NFL protocol on concussions? : NPR 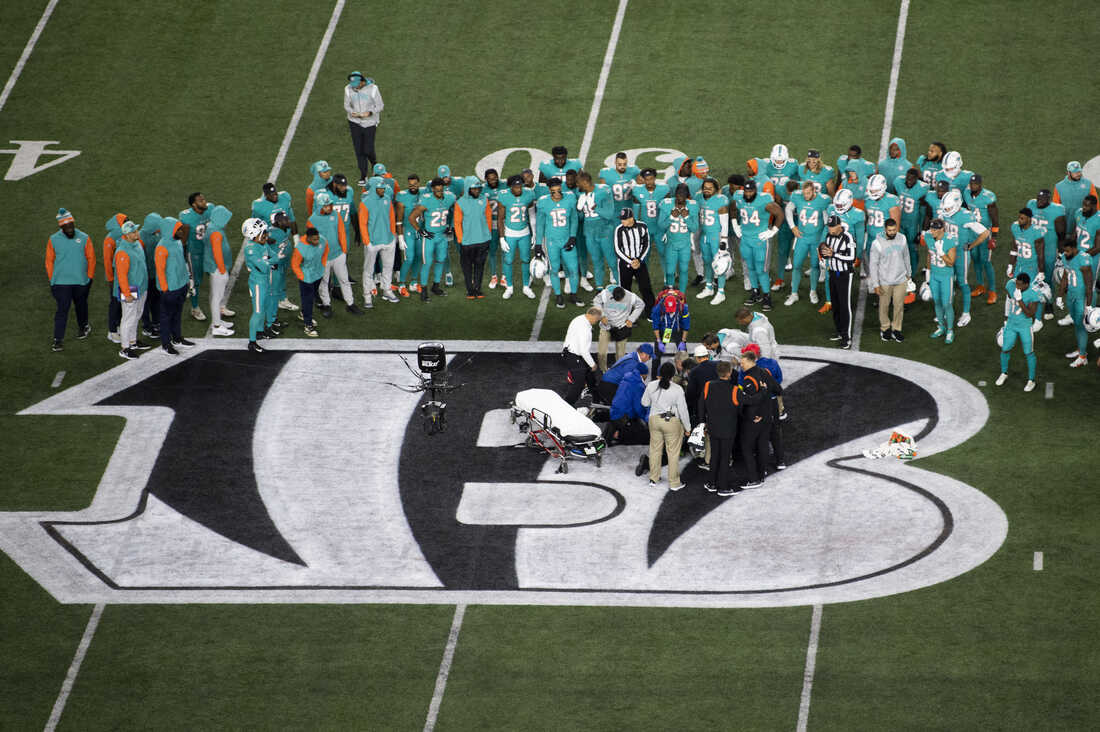 Teammates gather around Miami Dolphins quarterback Tua Tagovailoa (1) after an injury during the first half of an NFL football game against the Cincinnati Bengals, Thursday, Sept. 29, 2022, in Cincinnati.

Teammates gather around Miami Dolphins quarterback Tua Tagovailoa (1) after an injury during the first half of an NFL football game against the Cincinnati Bengals, Thursday, Sept. 29, 2022, in Cincinnati.

Miami Dolphins quarterback Tua Tagovailoa was carried out on a stretcher Thursday night in a game against the Cincinnati Bengals.

“It was a scary moment,” Dolphins Coach Mike McDaniel said. “He was evaluated for a concussion and he’s in the concussion protocol. He was at the hospital. I believe he’s about to get discharged.”

Earlier this week the league union said it would be investigating the Dolphins for its concussion evaluation process after Tagovailoa returned to the game following a hard hit in the first half in the team’s Sep. 25 game against the Buffalo Bills.

The Dolphins initially deemed that hit a head injury, but McDaniel walked back the call and said Tagovailoa injured his back, and again confirmed that Thursday night.

So how are teams supposed to evaluate head injuries?

How the NFL defines a concussion

Concussions can be caused by direct hits to the head, face, neck or anywhere else on the body that transmits force to the head, the league says.

Observable signs of a concussion include any loss of consciousness, seizures, delayed movement, difficulty with motor or balance coordination, a vacant look, clutching the head, confusion, amnesia or visible face injuries.

All players and team employees must receive and review educational materials about concussion at the start of the season and then craft an emergency medical action plan.

Every other year, players must receive baseline neurological evaluation and testing before the season starts. Tests may include a computerized exam or a pencil and paper test, or a combination of both and are administered every three years. More tests may be administered if a player may have sustained a concussion.

On game day, unaffiliated neurotrauma consultants (UNCs) and athletic trainers are stationed on the sidelines and in a stadium booth to survey the game for any signs of concussion.

If the UNCs or athletic trainers, also called booth spotters, see any sign of a concussion, they must contact the team physician to recommend a sideline examination. A UNC for the opposing team may also make the recommendation.

The player is first sent to the sideline to be checked out, and if any signs of concussion are identified, the player is sent to the locker room for further evaluation and must not return to the game.

If a player is sent back into the game before the medical staff have finished their evaluations, the booth spotter can call a medical time-out until the evaluation is completed.

Once a player has been diagnosed with a concussion, he is not allowed to meet or talk with press or drive on the day of the injury.

Viewers are outraged at the Dolphins’ response

Many who watched the game were extremely critical of how the Dolphins have treated Tagovailoa over the past week, saying he should not have been cleared to play Thursday in the first place.

“The bottom line regarding Tua is LIFE is bigger than football,” former NFL quarterback Robert Griffin III said. “Teams should always put the person before the player. Health before competitive advantage. Putting Tua out there isn’t just a player safety issue. It’s a quality of life issue.”

The bottom line regarding Tua is LIFE is bigger than football. Teams should always put the person before the player. Health before competitive advantage.
Putting Tua out there isn’t just a player safety issue. It’s a quality of life issue.

NFL Hall of Famer and Fox Sports commentator Shannon Sharpe said in one tweet he believes the Dolphins are lying about Tagovailoa sustaining a back injury, not a head injury, last week.

“That’s a serious injury,” he said in another. “Tua shouldn’t have been out there with Sunday Thursday turnaround. Sometimes players need protecting from themselves. Dolphins failed Tua.”

That’s a serious injury . Tua shouldn’t have been out there with Sunday Thursday turn around. Sometimes players need protecting from themselves. Dolphins failed Tua

Voice of Cards: The Beasts of Burden for PlayStation 4 Reviews

The Flop That Won Kim Kardashian a Razzie Returns From…

Jamie Richards credits his family with bringing ‘the change…

Actor, Whose Hand, Behind the Scenes