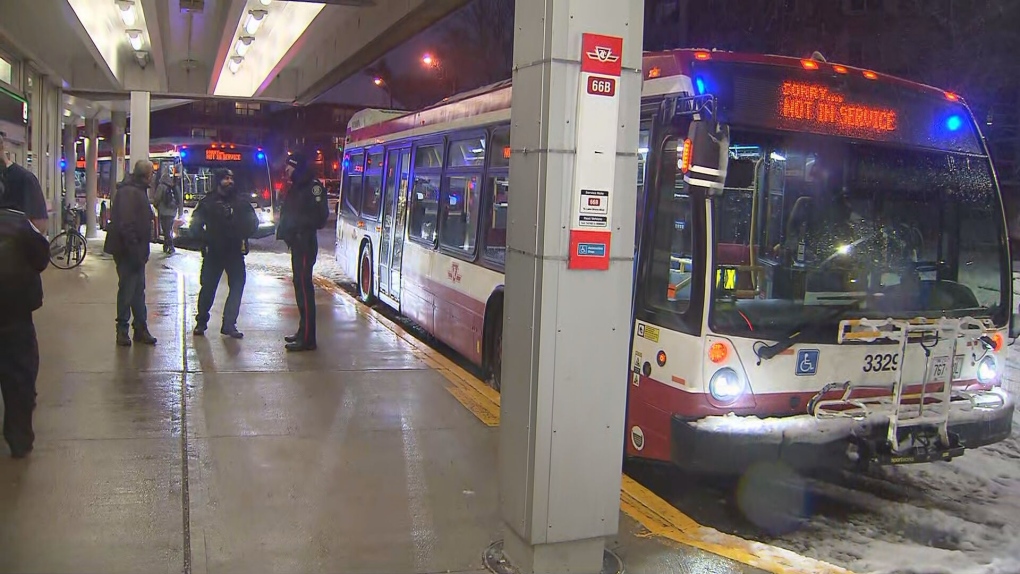 A 16-year-old boy has been seriously injured after being stabbed on board a TTC bus in Etobicoke on Wednesday afternoon.

Toronto police are investigating after a teen was stabbed at Old Mills Station.

When they arrived, officers found a teenage victim with stab wounds to his torso and legs. He was transported to a trauma centre with serious but non-life-threatening injuries, Toronto paramedics said.

Meanwhile, police continue to look for the person responsible for the stabbing, who was last seen on Bloor Street.

The suspect is described as being in their 20s with a medium build and wearing a blue mask and black jacket with the hood up.

“Our thoughts are with the victim in this attack,” the TTC tweeted. “As always, we’ll give police our full support as they investigate, including video and witness statements.”

Our thoughts are with the victim in this attack.
As always, we’ll give police our full support as they investigate, including video and witness statements.
The TTC has no further information at this time. https://t.co/fNpDU6buPo

The stabbing is the fifth reported attack on the city’s transit system since Saturday. Earlier on Wednesday, two TTC employees were allegedly chased by a person wielding a syringe at Dundas Station. Police have taken a suspect into custody.

On Tuesday, a woman was stabbed multiple times on a downtown streetcar. Police have since charged another woman with attempted murder in connection with the incident.

On Monday, two TTC employees were attacked on a bus in Scarborough in what police described as a “despicable” swarming-style assault. Four 13-year-old boys have been arrested for the assault.

And a 24-year-old TTC bus operator was shot with a BB gun while waiting to begin her shift in Scarborough last Saturday.

Meanwhile, the president of the Amalgamated Transit Union has called for the creation of a national transit safety task force in the wake of the recent attacks, which he said has reached “crisis levels.”

“It’s only a matter of time, unfortunately, before these injuries become catastrophic and start to take lives. We need to act now,” John Di Nino said. “Not tomorrow. Now.”