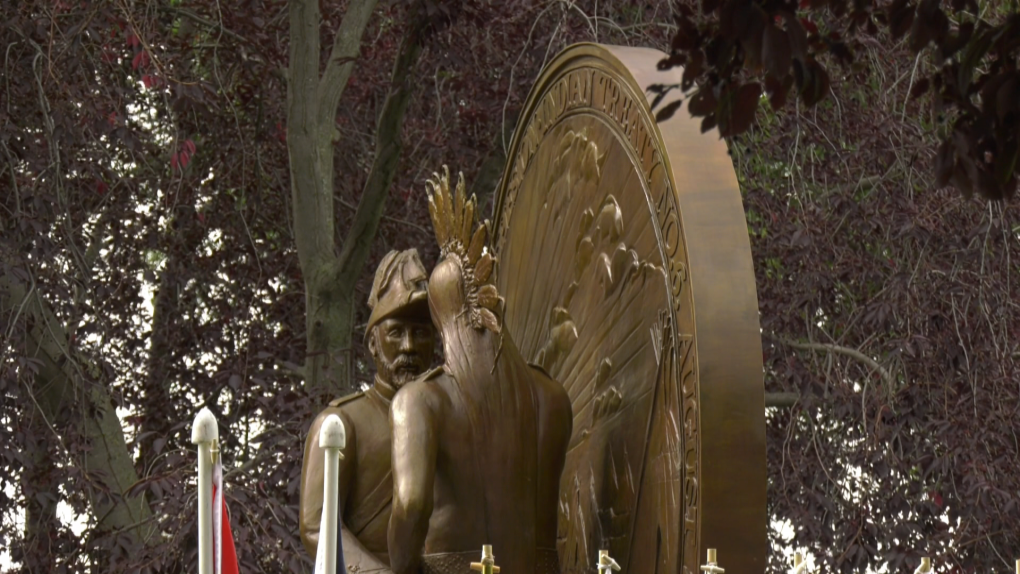 A new monument was unveiled at the Alberta Legislature grounds Sunday to commemorate the Edmonton signing ceremony of Treaty Six between Indigenous People and the Crown.

The massive bronze cast sculpture is an enlargement of the original medallion gifted 145 years ago by the British Crown to the Indigenous chief signatories of the adhesion to Treaty No. 6.

George Arcand Junior, Confederacy of Treaty Six First Nations Grand Chief, explained that after more than 10 years of research, planning, and designing, the statue was finally unveiled near the original Fort Edmonton location.

“Within 10 feet of this particular sculpture is where the actual adhesion was signed,” Arcand said. “By identifying this spot, we are now going to have the opportunity to continue to build on education to Albertans and other peoples throughout Canada.”

“It’s been a long time coming,” he added.

For Chief Tony Alexis of the Alexis Nakota Sioux Nation, the piece of artwork acts as a tangible reminder of not only the history behind the treaty, but the living commitment that extends to the present.

“It validates and acknowledges the fact that there was a treaty signed,” Alexis said. “(For) 145 years we have been in this partnership, and we are only starting to realize that this is a true partnership.

“It is not, we are being fed or we’re being looked after by governments,” Alexis told CTV News Edmonton. “We have always been independent; we’ve always had our own way. For thousands of years, we have enjoyed life here.”

A closeup of the sculpture that is an enlargement of the original medallion gifted by the Crown to signatories of Treaty No. 6 (CTV News Edmonton/Joe Scarpelli).

Land covered by Treaty Six extends from what is now known as west-central Alberta into Saskatchewan. Seventeen First Nations are encompassed by the treaty in central Alberta, including the Cree, Nakota Sioux, Dene Suliné, and Saulteaux peoples.

Treaty Six was first signed at Fort Carlton on Aug. 23, 1876. Further signatories to the document were added through adhesions from 1877 to 1950 in ceremonies across present-day Alberta and Saskatchewan, including Fort Edmonton, Blackfoot Crossing, and Rocky Mountain House. 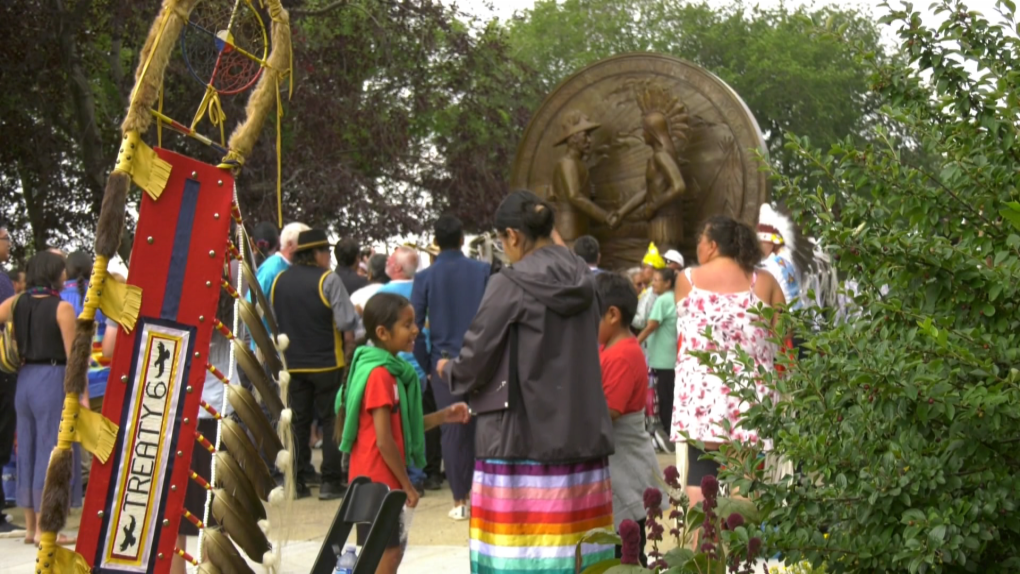 Herman Poulin, the artist who brought the monument to life, says he was given the concept for the monument in 2001 when a chief showed him the Treaty Six medallion, and he wondered if there was a way to bring it to life.

It took more than four years of continuous work to bring the large casting to life.

“When it comes to the value, what it will bring to our community is indispensable,” Poulin said.