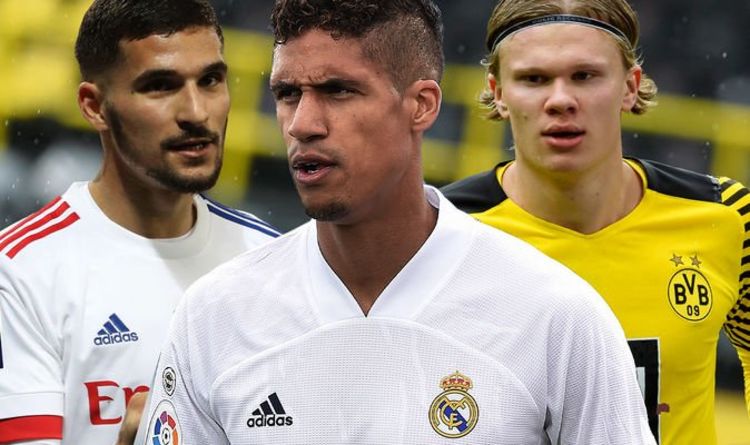 Express Sport brings you all the latest transfer news as Premier League sides look to strengthen their squads ahead of the new season. Manchester United are apparently close to announcing Raphael Varane, while Chelsea are hot on the pursuit of Erling Haaland. Chelsea and Liverpool are also battling for Lyon playmaker Houssem Aouar.

Man Utd ‘hours away’ from signing

7am: Manchester United are reportedly just hours away from striking a deal with Real Madrid for Raphael Varane.

The two clubs are negotiating over the fee for the centre-back, with personal terms thought to have already been agreed.

United are desperate for a new defender to partner Euro 2020 finalist Harry Maguire.

The Red Devils have had a longstanding interest in Varane and the French World Cup winner is now finally ready to wave goodbye to the Bernabeu.

Madrid magazine MadridistaReal claims an agreement between United and Real is ‘hours away’.

6.30am: Liverpool and Arsenal are reportedly battling for Lyon playmaker Houssem Aouar.

The French side have apparently slashed their asking price having denied Aouar the chance of moving to Arsenal last summer.

The 23-year-old is attracting interest from many Premier League clubs, including Tottenham.

But Le10sport claims that Liverpool are in pole position ahead of Arsenal for Aouar’s signature.

6am: Former Norway international Jan Aage Fjortoft has offered Chelsea belief that they could sign Erling Haaland this summer.

Speaking to ESPN FC, Fjortoft said: “You can only imagine how much money Dortmund have lost (due to the pandemic).

“They got some of the money back by selling Jadon Sancho.

“I still think there is a chance this could happen. If you see it from the point of view of Chelsea and the management of Chelsea, [they] have Tammy Abraham, Hakim Ziyech, [Callum] Hudson Odoi – these players could get half of the Haaland fee from some other desperate clubs at the end of the transfer window.

“Chelsea have players to sell as well. I think it could be a good business case for them.

“So I think this is the perfect striker for them.”